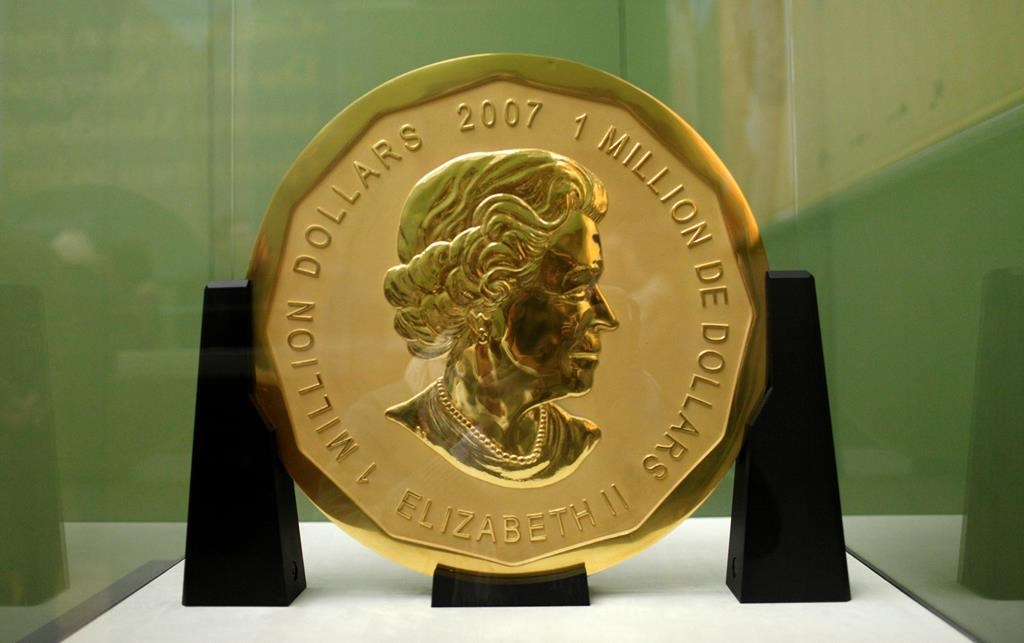 The gold coin 'Big Maple Leaf' in the Bode Museum in Berlin. File photo by The Associated Press
Previous story
Next story

A massive gold coin issued by the Royal Canadian Mint has been stolen from a museum in Germany.

Police in Berlin say thieves broke into the German capital's Bode Museum before dawn Monday and made off with the 100-kilogram gold coin worth millions of dollars.

The "Big Maple Leaf" coin, which is three centimetres thick with a diameter of 53 centimetres, has a portrait of the Queen on one side and maple leaves on the other.

The museum, which has one of the largest coin collections in the world, said on its website that coin has been on loan in its numismatic collection since 2010.

Royal Canadian Mint spokesman Alex Reeves says the coin does not belong to the mint and the owner is unknown.

He said it has a face value of $1 million, but by weight alone it would be worth almost US$4.5 million at market prices.

The mint is still in possession of the original "Big Maple Leaf" coin, which Reeve said was made 10 years ago when the mint launched its one-ounce gold bullion coins.

"So then it became a product that was made on demand and customers who made a non-refundable deposit on the coin had one manufactured for them," Reeves said.

A total of five coins were produced and sold that way, he said. The one stolen in Germany is one of those five.

Museum spokesman Stefen Petersen said Monday the thieves apparently entered through a window at about 3:30 a.m., broke into a cabinet where the coin was kept, and escaped with it before police arrived.

He added that a ladder was found by nearby railway tracks.