Environmental lawyer Will Amos talks about life inside the Trudeau government 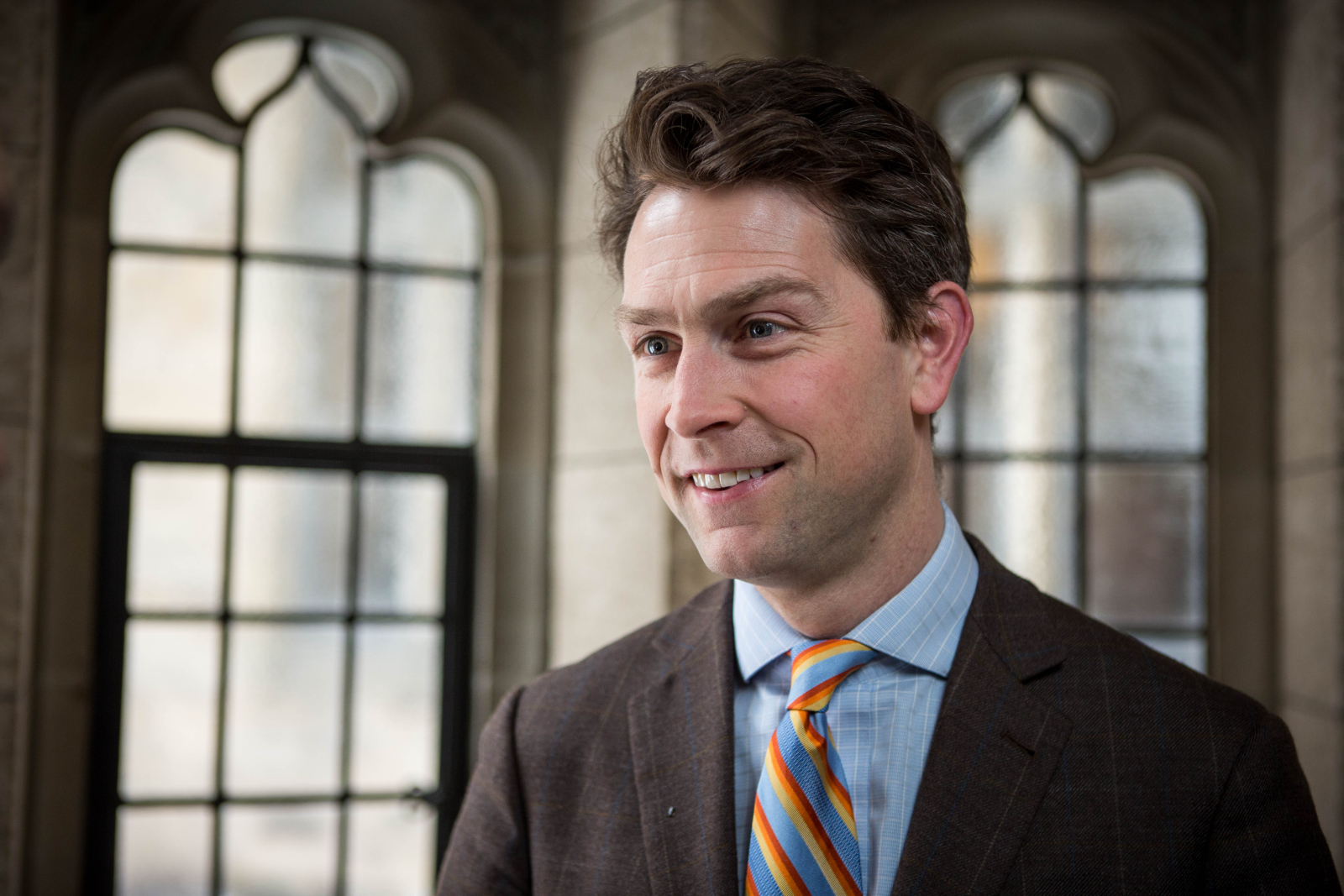 Liberal MP Will Amos takes questions from National Observer during an interview on Parliament Hill in Ottawa on March 24, 2017. Photo by Alex Tétreault
Previous story
Next story

Will Amos was living in Ottawa and working across the river in Gatineau, when his friend had the bright idea that they should commute to work in a canoe.

“It was fun! I mean, you’re sitting in your office all day,” said a grinning Amos, now the Liberal member of Parliament for the Gatineau-area riding of Pontiac, in an interview Friday.

Amos, sporting what he called “a huge beard” at the time, was working in the environment minister’s office in the late 1990s. He and a friend would paddle twice a week from the Ottawa neighbourhood of Westboro, to downtown Gatineau across the Ottawa River, he said.

From those soggy beginnings, Amos became one of the most vocal environmental critics of Stephen Harper's government. As a lawyer and director of the Ecojustice Environmental Law Clinic at the University of Ottawa, he spoke out against the former Conservative government's “deregulatory extremes" when it changed the Navigable Waters Protection Act, which critics said removed protections for 99 per cent of lakes and rivers.

Today, the staunch environmentalist still speaks out against Harper-era policies—only now he finds himself on the government side, elected as an MP in 2015. He considers it “inspiring,” he said, to work alongside Prime Minister Justin Trudeau in order to “right the many, many, wrongs of the previous administration.”

Yet while the Liberals paddle up to green-friendly policies, like negotiating a national framework on climate change, and promising nationwide carbon pricing and tens of billions of dollars for green infrastructure, Trudeau’s decision to support oil pipelines has sparked anger from environmentalists worried that pipelines don't represent a path to decarbonization.

Amos said he thinks the focus on pipelines by environmental groups is a “red herring,” or in other words, a distraction.

“I appreciate where certain individuals in the movement, and certain organizations in the environmental movement, how they have decided strategically to engage on pipeline infrastructure," he said.

"Those are strategic choices. But the simple fact of approving a given pipeline does not imply that the government is, in any way, shape or form, not fully behind the challenges we face with respect to climate change, and clean air, and moving towards a clean energy economy."

He considers it "a statement of fact” that oil will continue to be shipped in coming years and said he believes pipelines are safer than other methods of transport.

“It’s easy when one is in opposition, and it’s easy when one is taking a particular advocacy stance, to focus on just one point of view. I understand that; I’ve represented clients in that universe,” he said. “When you’re with government, you need to have a much more balanced perspective.”

Amos first recounted his memories of canoeing to work during a Feb. 23 speech in the House of Commons. He was speaking in support of his Liberal caucus colleague David McGuinty’s motion to create a conservation strategy for the Ottawa River watershed.

Amos had worked with students to provide legal advice to Ottawa Riverkeeper on the watershed’s governance. As an MP, he proposed an amendment to McGuinty’s motion so it would go to the environment minister’s office, instead of the Commons environment committee.

“We’ve moved from an idea that we knew was a good and appropriate one…to, ‘Let’s have our government consult and do it,’” he said.

He discussed more detail with National Observer the day environment committee, which he sits on, released a report on the preservation of federally-protected lands and waters.

The report, titled Taking Action Today: Establishing Protected Areas for Canada’s Future, includes 36 recommendations to the federal government on boosting its protected spaces ahead of a 2020 deadline to put at least 17 per cent of land and inland water and 10 per cent of coastal and marine areas under conservation.

The environment committee report calls on the government to adequately fund the establishment and management of protected areas like national parks, marine conservation areas, bird sanctuaries and wildlife areas, and to establish "multiple protected areas concurrently" in order to accelerate the pace.

“This is a great day for conservation and protected areas in Canada,” said Liberal MP and fellow committee member John Aldag, at a press conference Friday afternoon announcing the report’s release.

“To work with my colleagues on looking at how we can advance not only national parks but other sorts of protected areas, for the betterment of Canadian society and also biodiversity protection, is an amazing experience.”

Canada committed to several so-called Aichi Targets under the United Nations-negotiated Convention on Biological Diversity, including the 2020 conservation target.

But the country “has a long way to go” to meet the target, the report notes: just 10.57 per cent of land areas and 0.98 per cent of marine areas are counted as protected.

This week’s budget spreads out that money to a five-year period. Amos said the government was being fiscally responsible by pushing back the low-carbon cash.

“I don’t think it in any way diminishes the commitment,” he said.

“There are many sources of federal financing that go directly to the issue of climate change and greenhouse gas emission reductions,” such as the budget’s promise to spend $21.9 billion over 11 years on green infrastructure, he said.

The House transport committee also tabled its recommendations recently on the Navigation Protection Act, the result of the Harper government’s changes to the Navigable Waters Protection Act.

The transport committee recommended the government leave in place a provision in the new law restricting much of its application to a specific list, or schedule, of waterways works, something the Council of Canadians had lobbied against.

Maude Barlow, national chairperson of the Council of Canadians, said the committee “failed” to show leadership by keeping in place the scheduling system.

Amos said while the Harper government “went way too far” with its changes to the Navigable Waters Protection Act, he sometimes disagrees “with certain members of civil society.”

“There are some groups, some individuals and also some political parties who would like Canadians to believe that that law was about environmental protection,” he said. It was, only insofar as a regulatory requirement for permits provided an indirect way of triggering environmental considerations, he said.

“We’re going to do that. It doesn’t stand to reason, though, that the navigable waters law is the be all and end all of aquatic protection.”

"Amos said he thinks the

"Amos said he thinks the focus on pipelines by environmental groups is a “red herring,” or in other words, a distraction."

In other words, he rejects the science-based belief that the vast majority of fossil fuels must stay in the ground if climate change is to be stopped before the irreversible point is reached.

And he is nonplussed when googling up Mauna Loa, Keeling lab, and learning that the RATE of CO 2 accumulation is increasing - even as the oceans' acidity increases with absorption of carbon dioxide and the coral is bleached white with heating water.

I would not want this fellow to fight my case in court.

Rather incredulous position on pipelines by Mr. Amos, shocking even, considering Ecojustice, a "certain organization" the U of O environmental law clinic happens to be partnered with, has two pipeline challenges in progress, against Energy East and Kinder Morgan, and their home page brightly and valiantly proclaims; "We go to court to keep fossil fuels in the ground..."

This just cements my opinion of Ecojustice, buoyed by my interactions with the Calgary branch, that they practice red herring environmental justice and any Canadian with a meritorious claim should not trust this organization to represent them.

Good Lord! What an

Good Lord! What an environmental turncoat! He should go back to reading a bunch of truly scientific environmental reports again. Trudeau has obviously turned his brain to mush. Perhaps his canoe paddles are the total extent of his contribution to reducing GHG emissions.

I'm not convinced that

I'm not convinced that pipelines are the safest method of transport when it comes to bitumen. Dilbit is highly corrosive, and pipelines carrying it leak at a rate 3 times higher than pipelines carrying conventional crude. Also, if bitumen is transported by rail, it doesn't have to be diluted, and the diluents are part of the problem.

Maybe Will Amos should do more reading on the subject. Mind you, Trudeau has shown that he, like Harper, believes in policy-based evidence-making. His gargantuan ego tells him that he knows more on any subject than the experts, whether the subject be electoral systems or constitutional law. Some of this attitude has probably rubbed off on Amos, sadly.

From a financial perspective

From a financial perspective there is only merit in building a new pipeline if it is going to be used for thirty or more years. Building one thus effectively locks in greenhouse gas emissions for several decades, something we know is wrong, a crime against humanity. I would like Mr Amos tell us what is wrong with this argument.