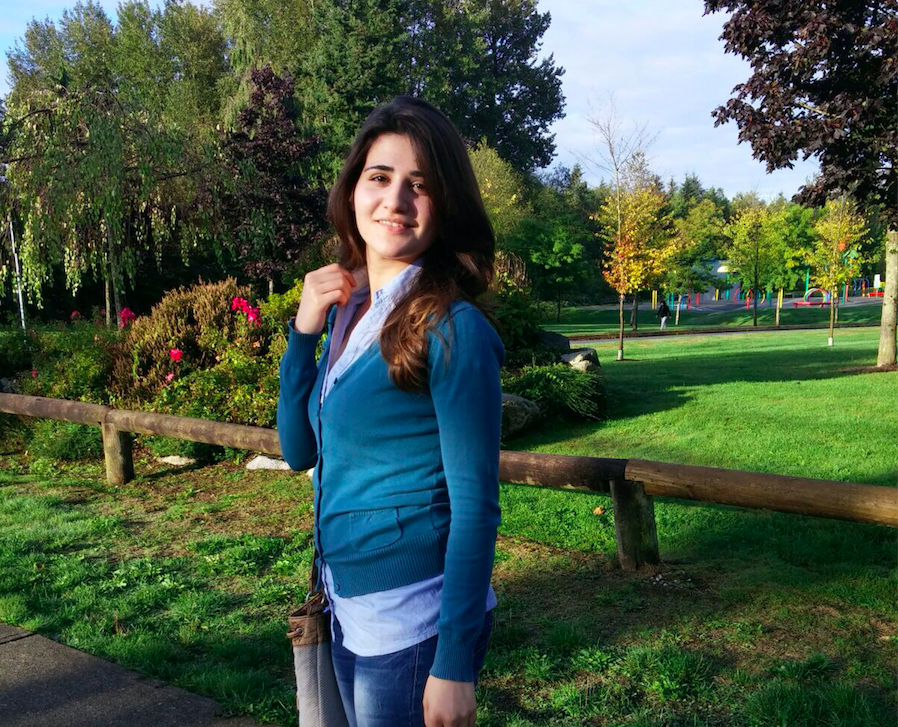 Syrian refugee Maryam Herro in Surrey, B.C., was shocked when her landlord's brother verbally abused her family on the basis of their religion. Photo submitted by Herro.
Previous story
Next story

Maryam Herro, a 22-year-old Syrian refugee, was shaken when her landlord's brother yelled at her family in their Surrey, B.C. home last week in an Islamophobic rant.

He told them that President Trump was right to ban Muslims and that they should go back to Syria.

The landlord is a Surrey-based real estate sales representative. Herro said the home is owned by the landlord's family, and that his brother is occasionally seen at the property. Reached by National Observer, the landlord refused to comment or to disclose information about his brother. He said police are dealing with the incident.

In response to questions about the incident, a Surrey police spokesman said that due to privacy concerns, police does not "confirm or deny investigations unless there is an investigational need or it has an impact on public safety." No charges have been laid.

On March 20, Herro had called a heating technician because the family had no heat since moving in last fall. According to a witness account, the landlord's brother was angered that the Herros had called professional help to fix the heating, and told them to go back to Syria if they can't handle the climate. The heating technician, who wished to remain anonymous, confirmed the family's account and says he was "appalled" by the scene. He said he felt badly for the family and waived the bill for his service.

A transcript of the dialogue between the technician and the landlord's brother as recorded by Herro's brother:

Landlord: "We've got terrorists. You know they're all over the world. Terrorists! All the terrorists in the Middle East are Muslims!"

Heat technician: "OK, this is the heat...so, there's nothing wrong with the heat."

Landlord: "(inaudible) These guys think they are more smart than me (inaudible)..."

Heat technician: "You understand, that sounds racist, you know. He says everybody has heat. Does everybody have heat?...So, you never had heat? You've got to give people heat, you know."

Herro said the family's relationship with the landlord's family had been strained, and that the landlord began pressuring the family to move out earlier this year. She said they struggled to find an alternative home because most homes in Surrey refused the family upon learning they were Syrian refugees on a limited income.

"We are five adults," she said, referencing herself, her mother and her sister Maria and two brothers Ahmad and Omran. "So, it's not easy to find under $1800 ...many landlords, when they hear that we are refugees, and they just say no."

She said the family had also been struggling emotionally because her father passed away in Vancouver from cancer in January.

Herro was the subject of an article in National Observer in November, commenting that she felt no rise in anti-refugee or anti-Muslim sentiment since the election of U.S. President Donald Trump. Herro speaks and writes English, and is a Muslim but does not wear a hijab (headscarf).

Herro recently attended a youth leadership conference in Winnipeg with fellow refugees and made a presentation with her friend about the importance of teaching newcomers to Canada about First Nations culture.

"We're not dangerous people. We're not strange people," she said. "I went to Winnipeg to speak about how we can help other people. We came from war, to have a safe life here. We want to just study and work like other people. But we don't feel OK now. We feel very sad."

Rise in racist incidents across Canada

Hate crimes targeting Muslims have been on the rise in Canada in recent years.

Alan Dutton, a retired academic and award-winning Vancouver-based human rights advocate, who is national director of the Canadian Anti-Racism Education and Research Society, said he's seen a major spike in complaints of racism and hate since Trump's election. Through his website, Stop Racism and Hate Canada, Dutton now receives one or two daily reports from across Canada of discrimination-based attacks, often targeting immigrants and refugees.

Although Trump has repeatedly denied being a racist, his chief strategist, Steve Bannon, has built a media platform for a controversial, xenophobic brand of politics known as the 'alt-right.'

"I think it's because of the kind of license that racists think they've been provided by Trump and the 'alt-right.' I've seen more of this across Canada, in Montreal, Winnipeg and Vancouver, just this week," Dutton said.

"What happened with this Syrian family is obviously a human rights issue—I would advise that this family file a complaint with the BC Human Rights Tribunal," Dutton said. "They have every right to live here, and shouldn't be subject to this kind of abuse."

On Sunday, protesters rallying against racism in downtown Vancouver were surprised when members of an allegedly anti-immigrant group known as the Soldiers of Odin appeared to disrupt their rally. Although the Canadian chapters of this group claim not to be motivated by racial issues, the group's name is taken an organization in Finland that targets refugees and immigrants.

Dutton said he's monitored complaints for decades, but that accounts of racism have increased steadily in recent years.

"It's more than in the 1990s, when we had the rise of WAR (White Aryan Resistance) and Aryan Nation groups," he said. "I've seen more of this across Canada. Montreal, Winnipeg and Vancouver, just this week."

With the arrival in Canada of more than 40,000 Syrian refugees as of January 2017, he says it's of concern that attacks against Muslims seem to have intensified. In particular, he said, the complaints are often directed against people who 'appear' Muslim, such as women wearing headscarves. Last week, the House of Commons passed M-103, a motion condemning Islamophobia and religious discrimination, in response to the rise in incidents targeting Muslims in Canada.

Although the Herro family's dispute with the landlord's family may have stemmed from concerns about heating, Dutton says the Syrian family in Surrey should not have been verbally attacked on the basis of their religion and country of origin.

"It's not fair to them," Dutton said. "To compound that issue because they come from a certain part of the world, that's an issue of human rights."