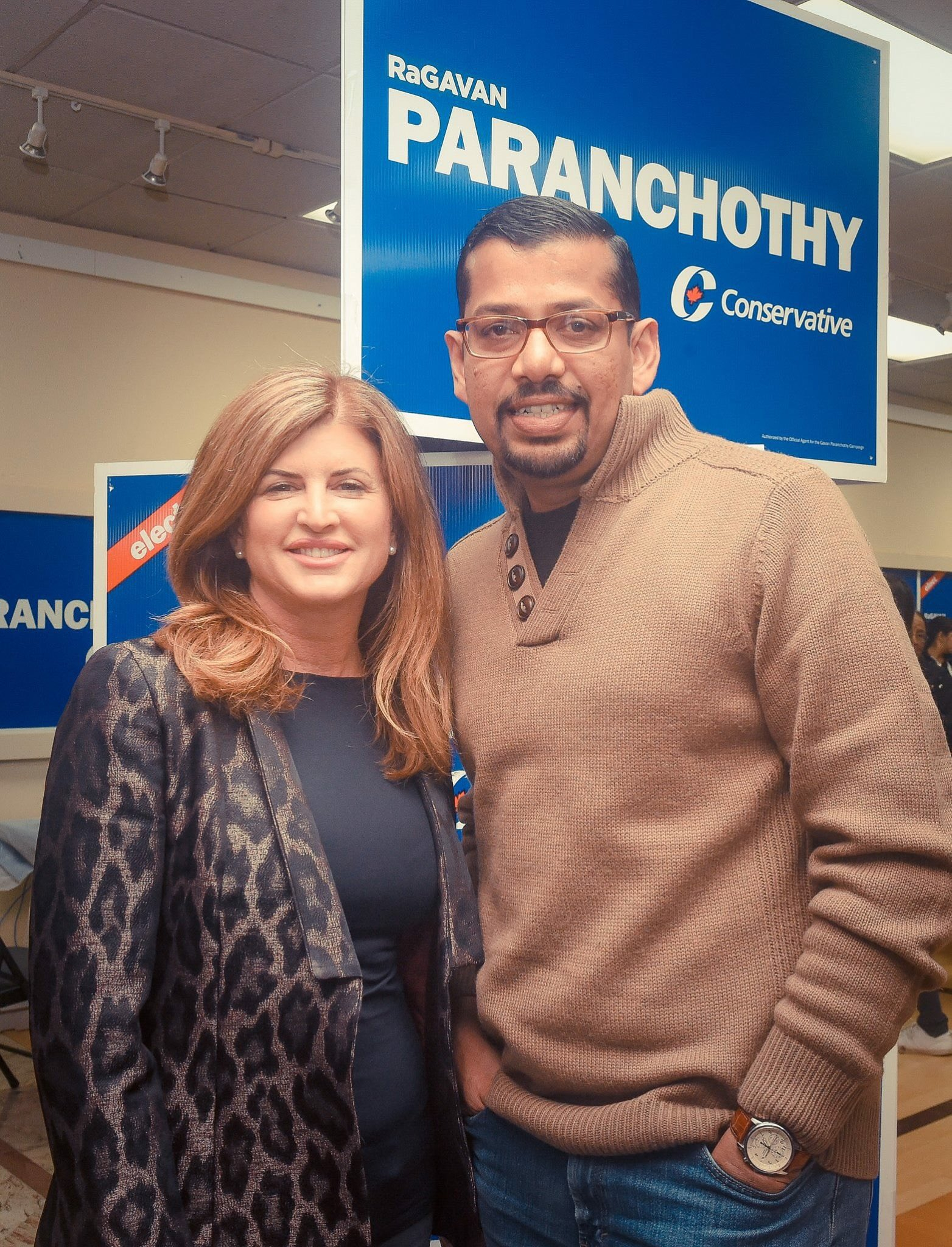 With less than a week to go before five federal by-elections on April 3, a Conservative candidate in the greater Toronto area is facing criticism for bringing U.S. President Donald Trump's "hate and anti-science" rhetoric to Canadian politics.

Ragavan Paranchothy, the Conservative candidate in Markham-Thornhill, is a television broadcaster and community activist who ran for the Conservative party in Scarborough Southwest in 2011.

But Paranchothy now finds himself under fire over social media posts in which he appeared to question climate change and asked what was wrong with women "being in the back row" of a mosque.

In a tweet from December 2016, Paranchothy wrote about “the ‘disappearing’ glaciers and ice from the north." In another tweet from April 2014, responding to a question about the role of women in a mosque, he asked “What’s wrong with the women being in the back row? It shldn’t (sic) make a difference, would it?”

He also shared an article with his followers on Christmas Day in 2015 that compared the "climate crisis" to a 19th-century panic about the buildup of horse manure on city streets.

Owen Macri, Paranchothy’s campaign manager, said in an email that the candidate was unavailable to comment, but that he “fully supports the Party's policy declarations on climate change and equality.”

In response to a December 2016 tweet from Questerre Energy CEO Michael Binnion about an apparent increase in the global polar bear population, Paranchothy wrote “Hmm. The 'disappearing' glaciers and ice from the north.. and the increasing polar bear population.. someone is lying to us.. who is the Q?!”

Hmm. The 'disappearing' glaciers and ice from the north.. and the increasing polar bear population.. someone is lying to us.. who is the Q?! https://t.co/nLpHeF2QKo

“It’s bad enough having Trump south of the border. We don't need more Trumps north of the border looking to bring that brand of hate and anti-science into Canadian politics," Greenpeace Canada climate and energy campaigner Keith Stewart said in an interview.

In April 2014, responding to a tweet by Toronto Sun columnist Tarek Fatah, in which Fatah asked “which Islamic jurisprudence (…) allows women in front row of mosques?” Paranchothy wrote: “With utmost respect for u I ask... What's wrong with the women being in the back row? It shldn't make a difference, would it?

@TarekFatah With utmost respect for u I ask... What's wrong with the women being in the back row? It shldn't make a difference, would it?

Responding to a tweet about international men’s day: “Its not known cos no one really cares about a thing like that for men. Social inequality!! I condemn!” Paranchothy wrote in November 2012.

Its not known cos no one really cares about a thing like that for men. Social inequality!! I condemn! RT "@Chinmayi: Today is Men's Day?"

Macri, Paranchothy’s campaign manager, said that the candidate supports the Conservative Party’s policy on climate change, which says that “an effective international emissions reduction regime on climate change must be truly global and must include binding targets for all the world's major emitters, including China and the United States.”

The party also supports federal and provincial investment to “study and address climate change adaptation in the North,” Macri noted.

He didn't immediately respond to a request for further clarification on Paranchothy's tweet about women in mosques, or his tweet about men's day and "social inequality."

“To me, this is another alarming example of the Conservative Party being out of touch with reality and the priorities of Canadians,” Markham-Thornill Liberal candidate Mary Ng said in an emailed statement.

Ng said she would “leave it to Mr. Paranchothy to explain his own remarks.”

In an emailed statement, Chong said: “Any party led by me will be big enough to include a diversity of perspectives and beliefs. In fact, I will encourage that. But if I am leader and prime minister, my government will take real action to reduce emissions and address climate change, we’ll ensure the equality of women and men, and we'll lead a government that includes Canadians of all races, religions and creeds.”

NDP candidate Gregory Hines did not respond to requests for comment.

The Markham-Thornhill seat is currently empty, vacated by former Liberal MP John McCallum, who stepped down to become Canada’s ambassador to China. The byelection is scheduled for April 3 and the Liberals are expected to retain this seat.

Voters will also be going to the polls in four other federal ridings on the same day — two in Calgary, one in Montreal and one in Ottawa.

Editor's note: This article was updated at 4:25 p.m. with comments from the Green Party and the NDP.