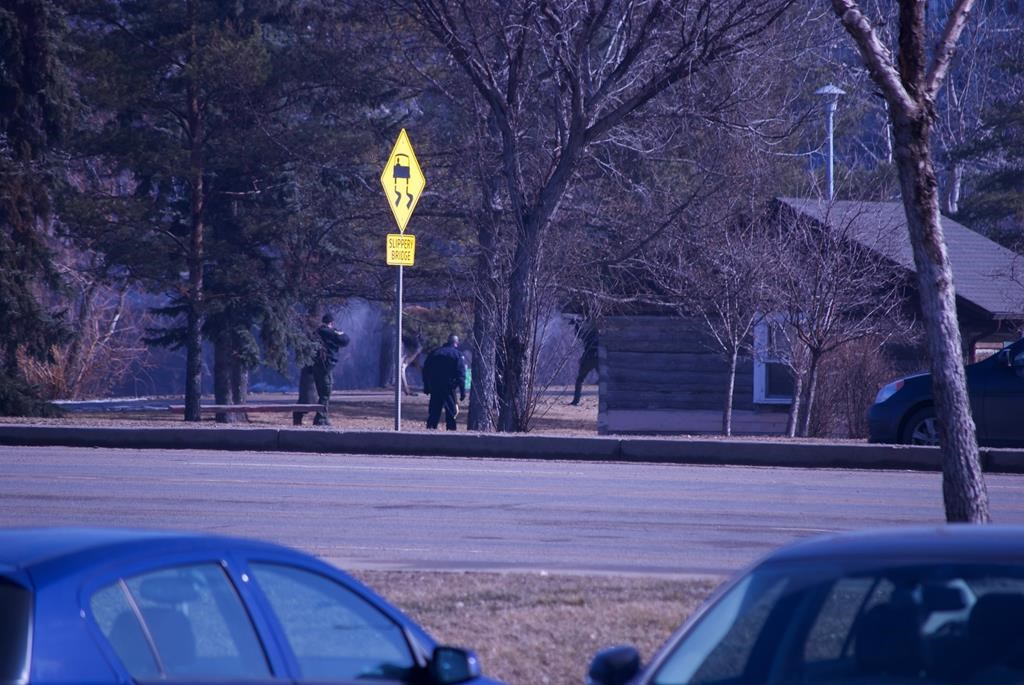 Conservation officers, left and right, fire on a moose as an RCMP officer looks on in Red Willow Park near St. Albert Trail, in St. Albert, Alta., on Wednesday, March 29, 2017. Photo by The Canadian Press
Previous story
Next story

Alberta Fish and Wildlife officers are being criticized for killing a cow moose in a city north of Edmonton.

The cow moose and her two calves were in a park near a busy intersection in St. Albert when the shooting happened around 11:30 a.m. Wednesday.

Brendan Cox, spokesman for Alberta Justice, says officers had hoped to herd the moose out of town for the safety of the animals as well as nearby people.

But he says the mother moose charged at one of the officers, leaving them with no option but to use lethal force.

However, witness Quentin Innis says the moose did not charge, but the officers moved towards the animal.

Elaine Vrolijk, who works across the street, says the three moose were in the park since about 10 a.m. and were pretty placid and not aggressive.

"If she charged, that was a situation they created," Vrolijk says. "They were very calm and the only time I saw them panicked was after the first two shots."

She says she got photos of the moose just standing around or lying under a tree, and wants to know why fish and wildlife officers felt they had to shoot the mother.

"Why would you not (tranquilize) the mother and then the calves and then move them out?"

Innis says he has filed a complaint with both the RCMP and Fish and Wildlife about the killing, which he calls "unnecessary."

He believes the officers lost control of the situation.

"Wild Animal 101 is that you don't separate mothers from their young, that's grilled into every Canadian kid from the time they are six years old, so I don't get why they thought it was necessary to approach the moose."

Cox says officers did not want to kill the moose.

"Fish and Wildlife Officers work tirelessly to help manage and protect the animals in this province, and outcomes such as this are exactly what they try to avoid," he said in an email.

"At the same time, wild animals can be very unpredictable, even for Fish and Wildlife officers and others with extensive training ... Unfortunately in this situation, the cow moose charged one of the fish and wildlife officers, and with the life and well-being of that officer in clear and present danger, the officers on scene had no option but to use lethal force to stop the moose mid-charge."

Cox says the two calves were "safely immobilized" and relocated out of town.