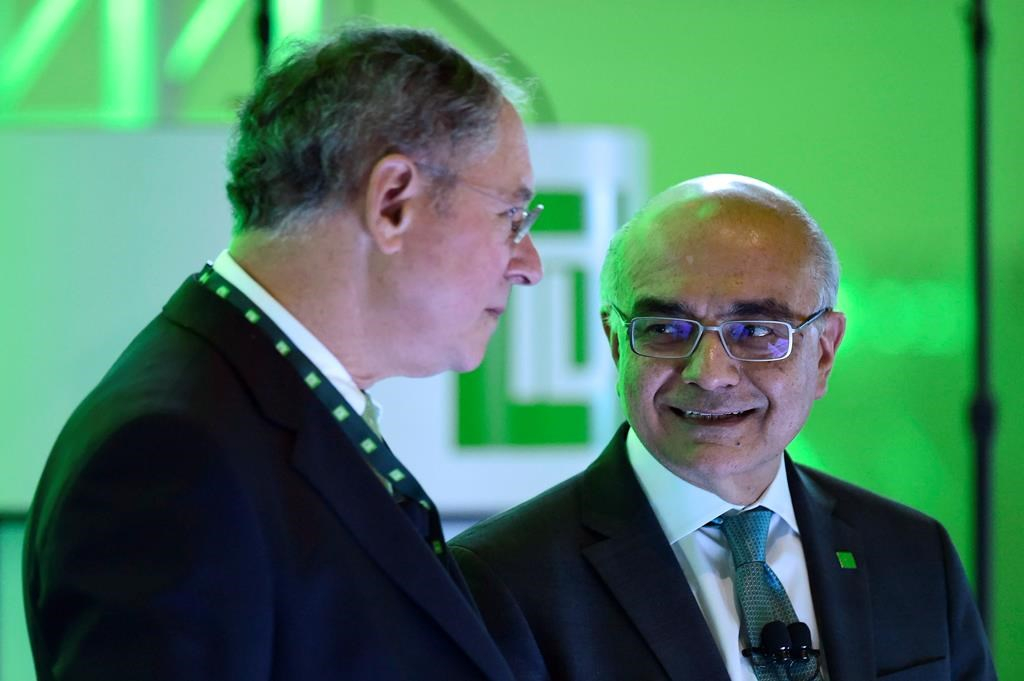 President and CEO Bharat Masrani, right, and Chairman of the Board Brian Levitt speak at the TD Bank Group annual general meeting in Toronto on Thursday, March 30, 2017. Photo by The Canadian Press
Previous story

TD Bank has enlisted the help of an outside company to review its business in light of reports that some employees allegedly broke the law in order to meet sales targets and keep their jobs.

"It's not an unusual event in the bank that we ask outside firms to come and assist us," CEO Bharat Masrani told reporters following the bank's annual shareholder meeting Thursday.

Masrani declined to say which firm would be helping the bank or how long the process will take.

"I want to make sure that it is done thoroughly and make sure that we do it right, but I also want to see it done in a reasonable period of time," he said.

Masrani opened his speech to the company's shareholders by addressing reports from the CBC several weeks ago, which cited unnamed bank employees who alleged they used aggressive, and in some cases illegal, sales practices.

Masrani said he has been speaking with TD employees across the country since the report came out and he doesn't believe that the problem is pervasive.

TD has roughly 13 million personal banking customers in Canada, who last year had more than 100 million interactions with tens of thousands of bankers, he said.

Meanwhile, the bank said it received a few hundred complaints last year regarding sales practices that escalated beyond the initial stage. Fewer than 100 of those complaints raised compliance concerns, Masrani said.

All of the concerns were investigated and addressed, Masrani said.

"I don't believe we have a widespread problem, but any one problem is one too many, so we will look at that," Masrani told reporters.

The Financial Consumer Agency of Canada has launched its own investigation into business practices in the federally-regulated financial sector following the reports.

The Canadian Bankers Association, which represents the country's largest banks, has said its members will co-operate with the review.