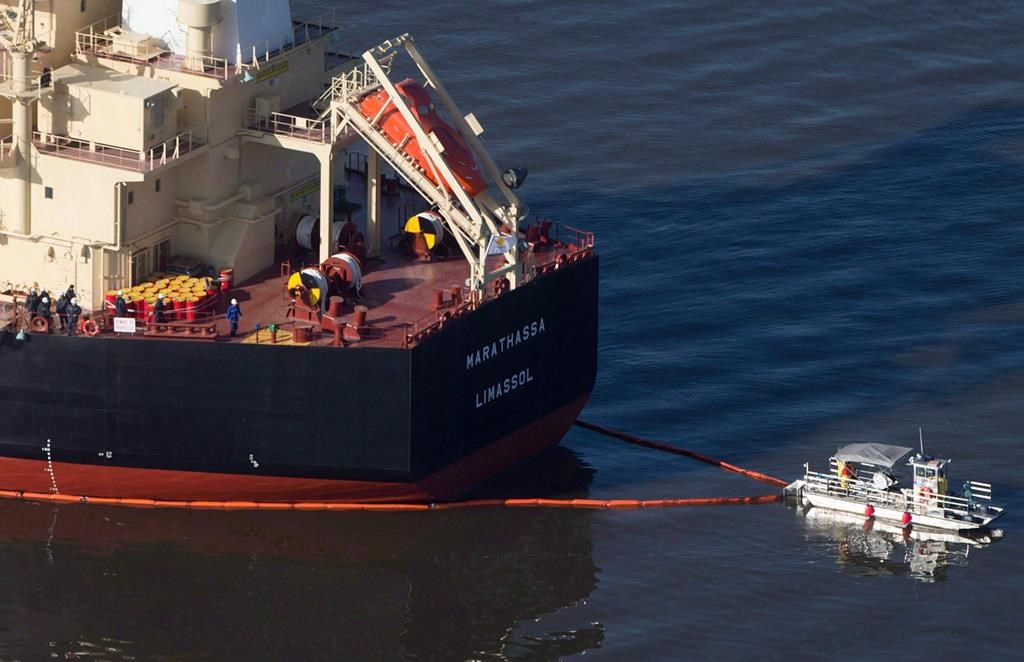 A spill response boat secures a boom around the bulk carrier cargo ship MV Marathassa after a bunker fuel spill in Vancouver, B.C., on April 9, 2015. File photo by The Canadian Press
Previous story
Next story

Charges have been laid against the owners of the MV Marathassa nearly two years after a leak of bunker fuel onto the beaches of English Bay in Vancouver, but the company is trying to scuttle the proceedings.

Documents filed in British Columbia provincial court show the Marathassa and Greece-based Alassia NewShips Management Inc. face a total of 10 charges including discharge of a pollutant.

In all, six charges have been laid under Canadian shipping legislation, two relate to alleged Fisheries Act violations and single charges linked to alleged violations of federal environmental laws and the Migratory Bird Act.

None of the allegations has been tested in court.

A provincial court date has been set for Wednesday, but the company is attempting to stop the proceedings with an application for judicial review filed in Federal Court.

In the application, the company argues a summons served by the Public Prosecution Service of Canada or the Attorney General of Canada are invalid.

It says the summons was served to a Canadian insurance adjuster, Charles Taylor Adjusting services, as well as Antonios Valakitsis, master of the MV Afroessa. The summons was addressed to Alassia NewShips Management Inc. in Greece.

Alassia argues that Canadian law requires summonses to be delivered to a director, manager, secretary or other executive officer of a corporation or a branch of it, and that neither the insurance adjuster or Antonios fit that description.

The application says Antonios is a short-term contractor who does not have any ongoing position with Alassia, as he only served as master of two of the company's vessels under fixed contracts. It also says the MV Afroessa is owned by a different company.

It also wants an interim order stopping the prosecution service or attorney general from taking any steps against the company in B.C. provincial court until a judicial review is heard and determined.

The company is also seeking costs.

At least 2,700 litres of bunker fuel spilled on April 8, 2015, while the Cypriot-registered vessel was moored in English Bay.

Enbridge getting cleanup equipment just in case of oil spill