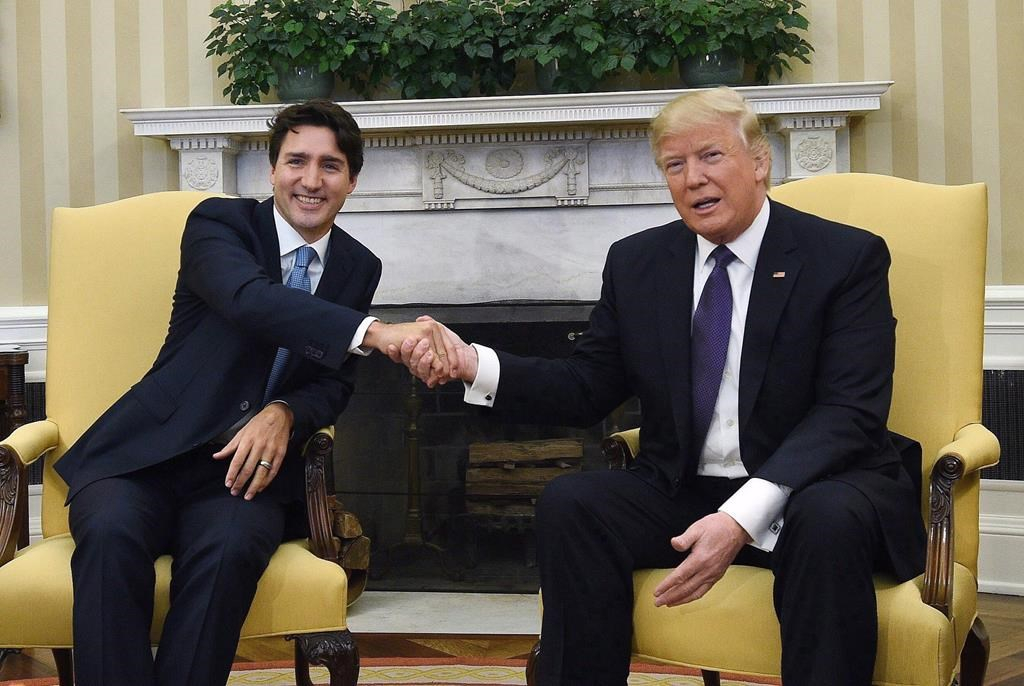 Prime Minister Justin Trudeau meets with U.S. President Donald Trump in the Oval Office of the White House, in Washington, D.C., on Feb. 13, 2017. File photo by The Canadian Press
Previous story
Next story

Justin Trudeau is driving home the message that Canada and the United States share a special relationship that relies on the continued smooth flow of commerce across their border.

The prime minister says that means jobs in both countries, a message Canada will continue to impress on the Americans as Donald Trump prepares to hold his country's major trading partners to account.

The U.S. president wants to determine which countries are using abusive trade practices to run export surpluses — and Canada is among those to be examined.

The president will sign an executive order today demanding a study within 90 days of all the ways other countries allegedly pull a fast one on the United States through anti-competitive trade practices.

It will be a systematic examination of things like non-tariff barriers, lax legal enforcement, currency manipulation and other means that keep out American goods while other countries boost their own exports.

"The United States regularly assesses what its partners are doing and what's going on in the trade relationship. And that's something that we're certainly happy with," Trudeau said Friday.

Trudeau and his cabinet have mounted a full-court press on Washington to drive home that message, and that's not about to stop now, as businesses and provincial and municipal governments continue their efforts in tandem with Ottawa, he said.

"It is of fundamental importance to good jobs in both countries that we continue to strengthen and ease the flow of goods, services and people back and forth across our border in secure ways."

The goal of the Trump study is to quantify exactly how much of the U.S. global trade deficit is due to supposedly unfair practices, and seek remedies for the imbalance.

"There has never been this kind of systematic analysis," Commerce Secretary Wilbur Ross said at the White House.

"It will be very heavily based on an empirical framework."

Ross stressed that he wasn't singling Canada out.

There are about 16 countries on the list, which includes places with the biggest trade surpluses with the U.S. The biggest is no contest: China, with a US$347 trade billion surplus with the U.S. last year. That's followed by Japan, Germany and Mexico, and a list of U.S. allies like France, Italy, India and Thailand.

Of all the countries, Canada is listed as having the smallest surplus. It was the last of the countries Ross mentioned. U.S. government statistics show Canada even ran a trade deficit of US$11.9 billion with the U.S. in goods and services in 2015, before running a surplus in 2016.

Ross acknowledged an obvious reason for that Canadian surplus: oil. American energy consumption patterns require it, and that results in millions of barrels per day in imports that can't easily be waved away by executive order.

"Undoubtedly we'll conclude that with some of the countries no action should be taken," Ross said.

"A lot of what Canada's deficit comes from is oil."

When oil prices rise, Canada habitually runs a trade surplus with the U.S; the opposite happened in 2015 when they dropped. Ross pegged last year's Canadian trade surplus at $11.9 billion.

If Canadians want clues about what the study might find, those clues already exist.

The U.S. already publishes annual studies chronicling its trading partners' alleged abuses. Ross, in fact, claimed Thursday that no country trades as freely as the U.S. — including some others that like to brag about how they're supposedly free traders.

The latest U.S. report on trade barriers complains about Canadian dairy and poultry controls; limits on U.S. wine in grocery stores; aerospace support; telecommunications; the relatively minuscule $20 duty-free limit on goods purchased online; and limits on American companies' ability to supply some services to some Crown corporations, singling out cloud-computing and Hydro-Quebec.

Ross said: "I don't know that Canada can object to our doing the study — or anyone else." He said other countries couldn't possibly have a problem with the U.S. doing an examination of trade patterns, and bemoan it before the results are even in.

Oil and vehicles account for almost half of U.S. goods imports from Canada.

Softwood lumber represents a smaller share. But it's a significant source of Canada-U.S. trade disputes, and could be the source of yet another one: Trump is signing a second executive order Friday, and it involves toughening the system for collecting anti-dumping and countervailing duties in trade disputes.

The orders are being issued as the U.S. prepares to open NAFTA negotiations later this year.

Excluding Mexico from NAFTA would hurt the Canadian economy: consul

Excerpts from Trump's speech: "From this day forward, it’s going to be only America first"