No seats change hands in byelections, but Tories, NDP come on strong in Ontario 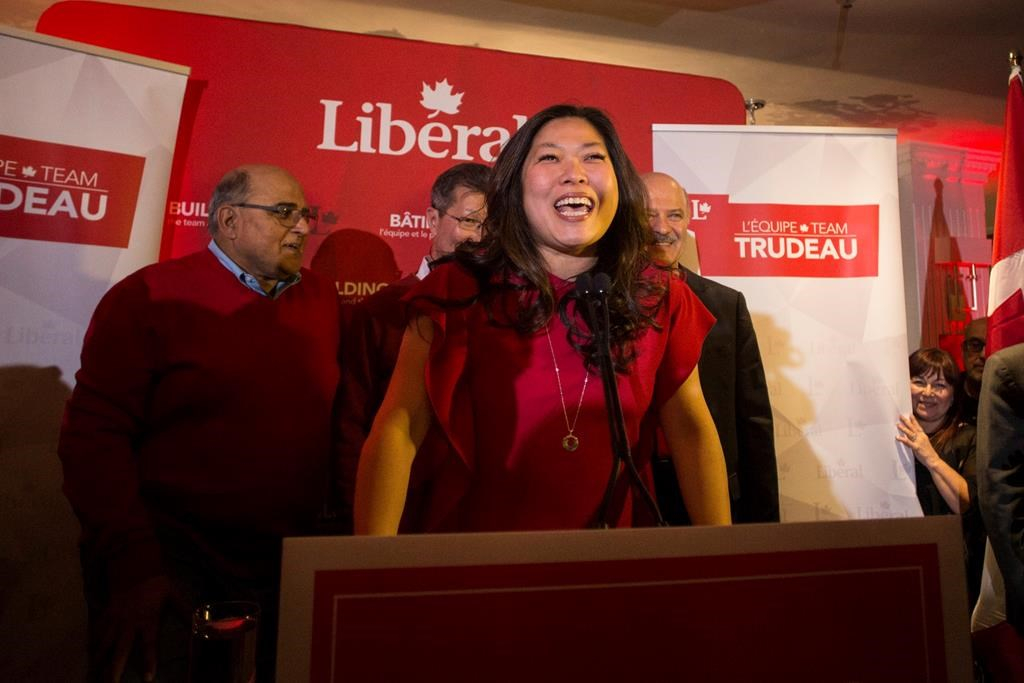 Liberal Candidate Mary Ng stands on the podium after winning the Markham-Thornhill federal byelection in Markham, Ontario, on Monday April 3, 2017. Photo by The Canadian Press
Previous story
Next story

Upstart Conservative and New Democrat candidates gave their heavily favoured Liberal rivals a bit of a scare Monday in a pair of byelections in Ontario where some of Justin Trudeau's policies and promises played a central role.

In the Toronto-area riding of Markham-Thornhill, Liberal candidate and former PMO staffer Mary Ng pulled away from Ragavan Paranchothy by a margin of more than 2,000 votes after her Conservative rival made a strong early showing.

A strong performance in the riding — long a Liberal stronghold held by ex-cabinet minister John McCallum — was critical for the Liberals, given the importance of holding Toronto if they want to form government in 2019.

It was also important for Ng, who is currently on a leave of absence from her job in Prime Minister Justin Trudeau's office and seen by some as a strong candidate for cabinet.

"The Liberal future is in Ontario," said political analyst Tim Powers, vice-president of Summa Strategies. "If the Liberal vote goes down in Markham-Thornhill, then they will want to spend a lot of time diagnosing what went wrong."

That did indeed appear to be the case: with nearly 90 per cent of polls reporting, Ng had claimed just 51.4 per cent of the vote, compared with 55.72 per cent in 2015. The Tory share of the vote was more than five per cent higher.

And in Ottawa-Vanier, where the New Democrats campaigned aggressively against the Liberals for breaking a promise to abandon the oft-maligned first-past-the-post electoral system, the NDP's Emilie Taman gathered nearly 30 per cent of the vote.

It was nowhere near enough to challenge Liberal candidate Mona Fortier, however, who had more than 3,000 votes on Taman with some 63 per cent of polls reporting.

Greg MacEachern, a former Liberal strategist now at lobby firm Environics Communications, said significant inroads in Ottawa-Vanier for the NDP suggests a surprising degree of anger over the abandonment of electoral reform.

Three other byelections took place Monday, and their results were hardly a surprise.

In the Montreal riding of Saint-Laurent, with 70 per cent of polls reporting, Liberal candidate Emmanuella Lambropoulos had 57.3 per cent of the vote, compared with Conservative rival Jimmy Yu, a distant second at just 20.4 per cent.

James had been considered the Liberal party favourite to replace Stephane Dion, the former Liberal leader who resigned his seat to become ambassador to Germany and the European Union.

The Alberta ridings of Calgary Heritage and Calgary Midnapore, formerly held by Stephen Harper and Jason Kenney, respectively, were no contest.

In Calgary Heritage, Bob Benzen was leading with about 70 per cent of the vote, well clear of the Liberals' Scott Forsyth at 22.6 per cent.

In Calgary Midnapore, Conservative Stephanie Kusie cruised to an easy win, posting 76.5 per cent of the vote with just over half of polls reporting, leaving her closest rival Liberal candidate Haley Brown at 17.6 per cent.

Conservative supporters in Calgary were in an upbeat mood as the polls closed Monday. Voters are angry, especially about the economy, said Sarah Watson, who worked on Kusie's campaign.

"The voter's we've talked to are pretty fired up. There's a strong sense of really wanting to communicate that Alberta matters," Watson said.

"I think you've had a chance to try on Mr. Trudeau for a year and a half to kind of see. Maybe people were willing to see if he was any different and I think that's worn off."

That could result in a stronger-than-expected turnout in Calgary Heritage, despite the status-quo expectations in a riding once controlled by Stephen Harper, said fundraising manager Mark Kihn.

"If you go further back, it's Preston Manning's riding too, right? That's a long time of having right-of-centre leaders," Kihn said.

"It has extra cache because it is Mr. Harper's riding, of course. Byelections don't get high turnouts. You're not toppling the government or anything like that, but here it is definitely a protest vote."