By National Observer & The Canadian Press | News, Politics | April 4th 2017
#16 of 108 articles from the Special Report: State of Journalism 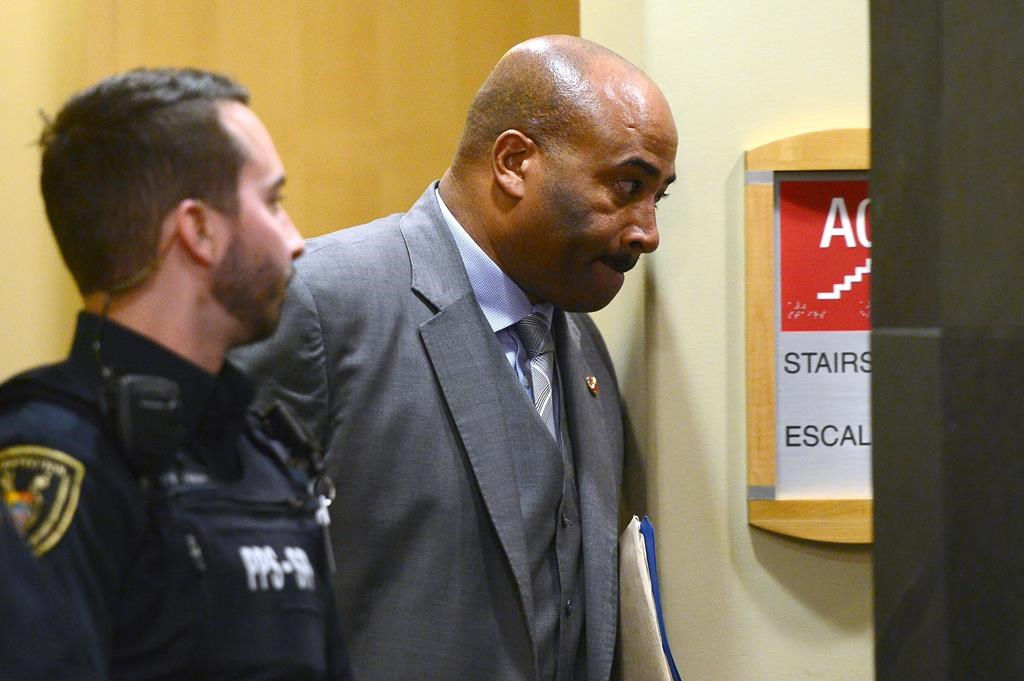 Sen. Don Meredith heads towards a hearing organized by his peers on April 4, 2017 to determine his punishment for alleged ethical mistakes. Photo by The Canadian Press
Previous story

Meredith faced a committee of his peers as the Senate inched closer to deciding whether he should be allowed to keep his seat in the upper chamber.

The Toronto-area senator spoke to the Senate ethics committee about a damning report that concluded Meredith abused his position as senator when he had a sexual relationship with a 16-year-old girl.

Meredith's closed-door testimony is part of a process the committee must go through before it can recommend what, if any, punishments Meredith should face.

The Senate posted security guards at the door to keep an eye on the proceedings.

Someone also set up stanchions to deter journalists from getting too close, and one media outlet reported that the guards were specifically instructed to keep the reporters away. The security guards on Parliament Hill normally carry weapons.

Stantions set up to keep media from the entrance to the Senate Ethics committee where Don Meredith will appear. pic.twitter.com/LW3UoV0JyN

National Observer photojournalist Alex Tétreault said the guards actively prevented most journalists from getting near an elevator where they would be able to question Meredith and others headed into the hearing.

And at the second entrance - security set up here so reporters can't ask Don Meredith questions either. pic.twitter.com/mkGjvLuper

The CBC reported that security guards were given "special instructions" to keep reporters away from spots where they could ask Meredith questions.

An official from the ethics committee confirmed that the meeting was supposed to be private, but denied giving any special instructions to security guards regarding the media. It was not immediately clear whether any individual senator gave instructions to the guards.

Several reporters who were trying to cover the proceedings said that their media outlets would be filing complaints with the Senate because of its lack of transparency.

"Security removed reporters from entry to ethics committee, will not say who made request, but Meredith can now get in w/o passing reporters," wrote CBC journalist Katie Simpson on Twitter. "So that's not good."

As a democracy, Canada has rules in its parliamentary buildings to facilitate the access of journalists to politicians.

Security removed reporters from entry to ethics committee, will not say who made request, but Meredith can now get in w/o passing reporters

So that's not good.

After it was over, the ethics committee chairwoman, Sen. Raynell Andreychuk emerged from the meeting and told reporters that the Senate was hoping to resolve the entire matter promptly.

Meredith's lawyer, Bill Trudell, who was also present for the meeting, told reporters that the tone of the discussion behind closed doors was professional, respectful and helpful to everyone.

He also dismissed a question from a reporter who asked how Meredith would respond to mounting calls for him to resign.

“I absolutely don't agree that the public is going to demand something without respecting a process," said Trudell, noting that Meredith had apologized for his actions. "That's not the way we work in Canada.”

Independent Sen. André Pratte says Meredith should be expelled from the Senate because his actions don't befit the office of a senator.

Sen. Anne Cools, an independent Liberal, calls Meredith's action a private matter and says the Senate shouldn't be policing the personal lives of its members.

The Senate has never expelled one of its own and there is a divide within the chamber about whether it has the power to do so.

with files from the Canadian Press

Editor's note: This article was updated at 4:15 p.m. ET on Tuesday with a new comments from Sen. Raynell Andreychuk and lawyer Bill Trudell.