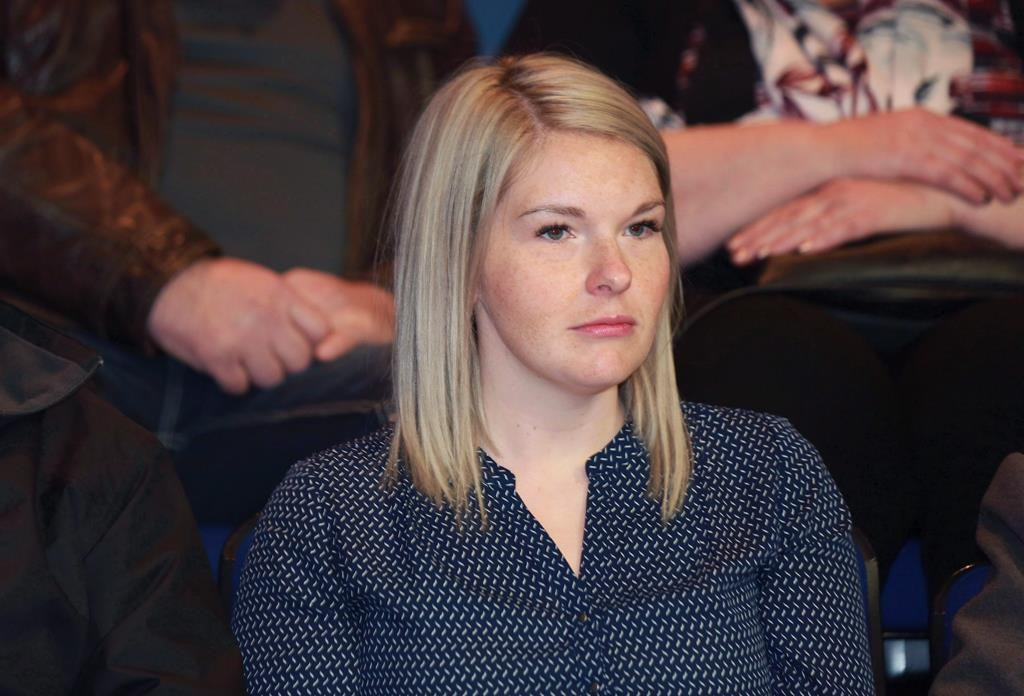 Meghan Dunphy, waits to give evidence during the Commission of Inquiry into the death of her father, Donald Dunphy, on the opening day of the Commission on January 9, 2017. File photo by The Canadian Press
Previous story

The daughter of a man shot and killed on Easter Sunday two years ago in his rural Newfoundland home is now suing the police officer who opened fire.

"The death of Donald Dunphy was caused by the wrongful act or neglect of Joseph Smyth," says the unproven statement of claim filed by Meghan Dunphy.

The lawsuit also names as defendants the Royal Newfoundland Constabulary and the Newfoundland and Labrador government for its role overseeing the force.

Const. Joe Smyth was a member of then-premier Paul Davis's security team on April 5, 2015, when he went to Dunphy's home in Mitchell's Brook, N.L.

It was Easter Sunday but Smyth was working a regular shift and made the drive about 80 kilometres southwest of St. John's to check out a social media post the premier's staff had flagged "of concern."

Smyth told a recent commission of inquiry into the death that the unannounced solo visit in RCMP jurisdiction was an effort to "build rapport."

Smyth was never charged after he told RCMP investigators he shot Dunphy, 58, in the left chest and twice in the head when he suddenly aimed a rifle at him.

Smyth's lawyer, Jerome Kennedy, did not immediately respond to a request for comment Wednesday.

A spokesman for the Royal Newfoundland Constabulary referred questions to the provincial Department of Justice and Public Safety. Department spokeswoman Amy Stoodley said she could not comment on a specific case because that "could be seen as trying to influence its outcome."

The Dunphy inquiry, led by provincial Court of Appeal judge Leo Barry, heard from more than 50 witnesses over two months starting in January.

Barry is to report and make any recommendations before July 1 on how to prevent such deadly conflicts in future. He will not make findings of criminal or civil responsibility but any new evidence could be investigated by police.

Smyth testified at the inquiry over three days in January. He was recalled last month when text messages discovered after his initial appearance seemed to contradict his sworn testimony.

Smyth initially testified that he never considered Dunphy a threat and never got advice on his notes about the shooting. But in those retrieved BlackBerry messages, Smyth told an unidentified friend the day before the fatal encounter that he had to deal with a "lunatic" who was "threatening the premier."

Smyth last month explained to the inquiry that he habitually deleted direct text messages to clear space on his outmoded phone.

He also said he didn't mean the term "lunatic" in a derogatory way. He said he used it after reviewing Dunphy's social media comments, including some he described as ranting.

Dunphy was an injured worker who often aired his disgust with the workers' compensation system on Twitter. His daughter and friends testified he was angry but never violent, and was never known to use guns.

The RCMP reported that a loaded .22-calibre rifle, which had belonged to Dunphy's late father, was found at his feet. Investigators said no fingerprints could be lifted as the weapon was too old, pitted and rusted.

Smyth also said during his second inquiry appearance that he had no recollection of several texts with RNC Sgt. Tim Buckle the day after the shooting about notes Smyth would take to his RCMP interview that afternoon.

Meghan Dunphy questioned the fairness and quality of the RCMP investigation from early on. She asked that an outside force be brought in but the request was denied.

RCMP investigators told the inquiry they at times inappropriately shared evidence with Smyth or were more casual with him, but stood by their findings.

The province has no independent, civilian-led unit to investigate serious incidents involving police. A review by the Alberta Serious Incident Response Team said there were "minor shortcomings" with the RCMP probe such as insufficient notes, but none brought its overall conclusions into question.