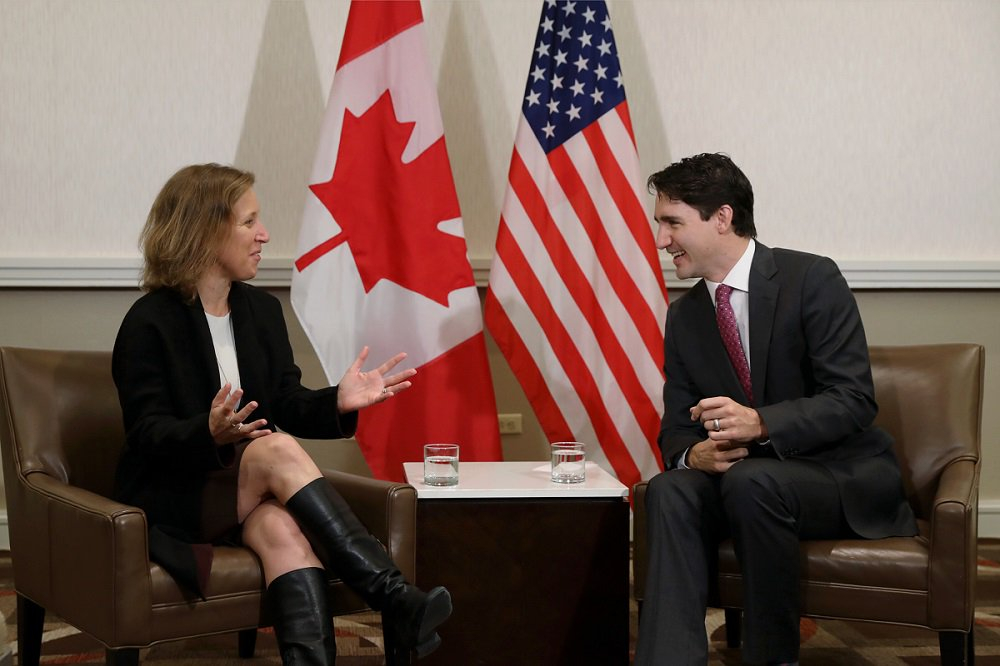 By the time the lights came on, the Canadian prime minister was already seated on stage, waving and beaming at the crowd of women, at once the heartthrob and beloved son. On the giant screen overhead, images of Justin Trudeau campaigning before crowds had just been flashing overhead, cut with an image of Justin as a child, in an intimate moment with father Pierre. Down on the stage, Justin Trudeau gave an earnest smile, betraying his characteristic charm. The final words of the trailer: “Will he be the last liberal standing?” The audience whooped and cheered.

This was the Women in the World Summit in New York City on Thursday, convened by the media mogul Tina Brown, in the Lincoln Center auditorium bearing the name of the Koch Brothers. Adverts for Toyota—“the Mother of Invention”—were emblazoned on banners and touch screens throughout the lobby, dwarfing the more modest ads for the Walton Family Foundation (of Wal-Mart fame).

Trudeau, on a whirlwind one-day trip to New York City, had arrived to the summit from a roundtable with women corporate leaders, after meeting earlier in the morning with YouTube CEO Susan Wojcicki. Now, Brown was interviewing the self-described feminist and the “world’s big liberal superhero” before the largely white, professional-class crowd.

“When you actually start seeing boards go from saying, ‘we’re getting a lot of public pressure, we really should appoint a few women to the board,’ to saying ‘we need to appoint more women to boards because we need better quality of decisions’,” he explained, “these are the kinds of things that matter.” Applause filled the cavernous theater.

This vision of female empowerment seemed a marked contrast to the one American voters chose in November. Concerns over the current U.S. administration—rolling back funding for reproductive rights worldwide, and headed by a man who brags of grabbing pussy—dominated the slickly-produced panel discussions of the day. Was Trudeau surprised to be conducting diplomacy with Trump and not Hillary Clinton? asked Brown.

“I’ll work with whoever the U.S. elects. The fact is that Canada is so interwoven with the U.S., and our economy dependent on it in so many ways that we need to have a constructive working relationship with whoever is in place,” he said.

This seemed rather sunny for the rainy day and dreary political climate outside. Brown remarked that Americans had been checking Canadian real estate prices en masse, and Trudeau explained that Canada is not “a magical place that’s some unicorn,” citing the existence of political divisions and racialized fears (though not growing concerns over the Missing and Murdered Indigenous Women inquiry, or critiques that the recent gender budget doesn’t do enough for indigenous women or poor single mothers). Yet the laughter and applause continued, betraying an audience still bewitched by the green grass on the other side of the border. There is little denying that Trudeau, light-hearted and resolutely nice, looks the polar opposite of mean-spirited Donald Trump.

But in this personality-driven game of politics, how much does this image diverge from that of Ivanka’s, who tweets about the gender pay gap and female empowerment while her father dismantles protections for women worldwide? Brown noted that Trudeau had “forged a bond” and begun collaborating with Ivanka. Did he see her as a “more sympathetic strand” of the U.S. government?

#EqualPayDay is a reminder that women deserve equal pay for equal work. We must work to close the gender pay gap! https://t.co/CcwsoBXWdF

Looking forward to promoting the role of women in the economy and the future of our workforce globally #W20 https://t.co/1OB9TK6poH

Trudeau side-stepped the question. The U.S.-Canada relation is “way bigger than just prime minister to president,” he responded. Governors, premiers, legislators, business organizations and leaders are all avenues “to highlight the closeness of the relationship, the interdependency,” he said.

And women’s leadership was a big part of this vision. “Every community and town I go to, I try to gather with extraordinarily successful business people, who happen to be women, to talk about what more we can do to create successful pathways,” he explained.

But Brown’s question had inadvertently highlighted the similarities between Ivanka’s image—mother, businesswoman and glamorous blond—and the corporate feminist ideal, widely espoused at the summit, of a woman who “has it all”: career, beauty and family. Newly equipped with a West Wing office, Ivanka is now one of the most powerful corporate woman leaders in America. Yet, even ignoring what critics describe as her complicity in her father's misogynistic agenda, she remains a consolation prize following the defeat of a woman who many had expected would shatter through America's highest glass ceiling on Nov. 8.

And just a few hours later, Hillary Clinton took the stage, in her first interview since the election. Calm and even funny at times, she spoke of her concerns over Russia (“the Russian hacking should give chills to anybody who cares about democracy”), Syria (“we should’ve, and still should take out [Assad’s] air fields to prevent him from being able to bomb his own people”), and the Trump administration’s failure to repeal and replace the Affordable Care Act (“they don’t know what to do, and I do admit, that was somewhat gratifying”).

Interviewed by New York Times columnist Nicholas Kristof, Clinton also discussed the glass ceiling, referencing Sheryl Sandberg’s 2013 bestseller Lean In: Women, Work and the Will to Lead, now the bible of the “has it all” corporate feminist. Clinton noted Sandberg’s explanation of how women are seen as less likable the more they are successful and ambitious—unlike men. “It lies at the heart of a lot of the misogyny,” she said, noting her high approval ratings as secretary of state under President Obama. This all changed when she began her run for president; even media that had previously been friendly began turning on her, she claimed. “By the time they finished with me, I was Typhoid Mary.”

Would she run for office again?

No, she said. Instead, she would be devoting time to encouraging young women to enter public service, and to working on a book that examined how she lost half the white, women’s vote to a misogynist. For now, she saw the biggest reasons to be Wikileaks, the intervention of outsiders and FBI director James Comey’s email just ten days before the election. But she did not address—nor was she asked about—the popular claim among the growing U.S. resistance that she lost because voters saw her as intimately tied to establishment interests. Critics cite her complicity in her husband’s rollback of the social safety net for poor women and children; her lobbying, as secretary of state, on behalf of U.S. corporate interests against an increase in the minimum wage for Haitian woman garment workers; her warmongering in the Middle East. They see her policies as mostly benefiting wealthy, white Americans, the one per cent.

And yet, inside the David H. Koch Theater, surrounded by Toyota ads, Clinton’s feminist rhetoric sounded much like Trudeau’s, and also a little like Ivanka’s tweets. Comfortably seated in plush, burgundy chairs, the audience roared. At least the corporate-friendly policies of those on stage — both members of political dynasties — were being presented in the name of women’s empowerment.

Having Trudeau attend these

Having Trudeau attend these events to mansplain the difficulty women encounter in business and life shows a complete lack of real comprehension of the issues or why his actions are deeply offensive. Not surprising, since he has lived a wealthy, elite, entitled existence his entire life and as well as never having been female, has never experienced any of the hardships or mysogeny women do. He's there for the attention and could care less if it gives offense.