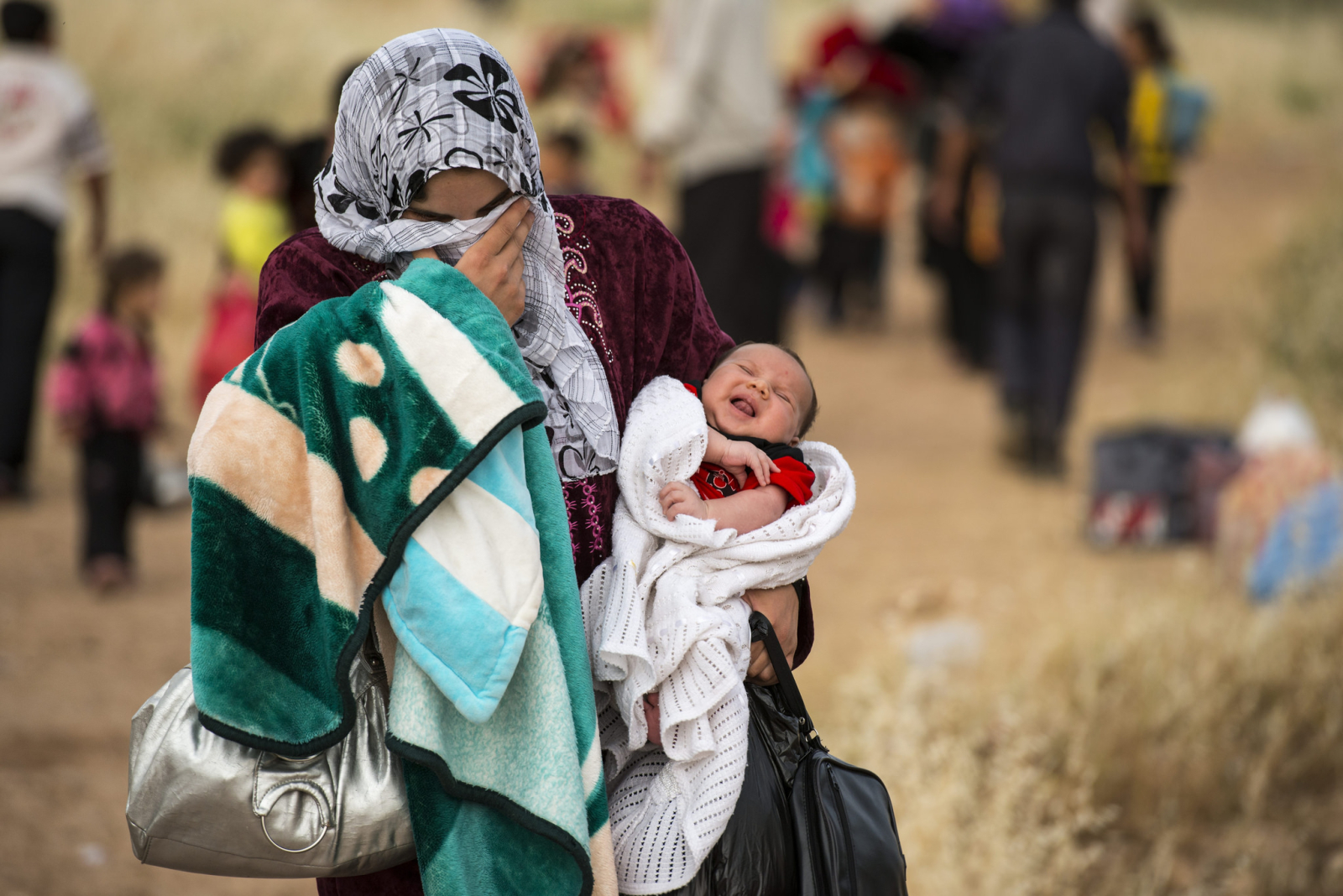 A woman crosses the Syrian border with her child. The conflict in Syria has diplaced 22 million people internally and outside the country, and some American citizens are working with Canadians to sponsor them. File photo from UNHCR
Previous story

Marcy Franck can’t get over the calm way that Ahmed, a young Syrian dental student, handles war in his home country.

From her home in Boston, thousands of miles away, she was chatting with him one weekend when the connection was cut off. A few minutes later, she received a voice recording from Ahmed with the sound of gunshots and explosions in frightening proximity.

"He came back online right after the bombing outside his window," she said. He immediately asked "So, how are you doing? Are you having a good weekend?" Franck laughs, astonished at the thought of it.

Franck is a Boston-based communications director for the Harvard School of Public Health. An American citizen, she's frustrated by what she feels is an inadequate response to the world's biggest refugee crisis since World War II. During seven years of war, about half of Syria's 22 million people have been displaced, with millions resettled outside the country.

She's focused right now on helping Ahmed (his name has been changed to protect his identity), who she says has become like a "little brother" to her since she got to know him through social media last May. Franck wants to bring Ahmed to Boston but instead, has worked on getting him and other refugees to Canada. She is one of a number of Americans who, thwarted by their own government's policies, are helping Syrians indirectly by connecting with Canadian sponsors.

One of the key reasons Americans are driven to connect with Canadian refugee sponsors is that the United States, unlike Canada, has no program allowing private citizens to sponsor refugees and help them settle in a new home. Refugee admissions are overseen by the U.S. State Department, now led by former ExxonMobil CEO Rex Tillerson.

"It's a terrible, terrible feeling," she said. "We're so close to being able to help them, and we have people (in Alberta) who are willing to take them in and resettle them. If we can't bring people here, at least we can raise money to help people get to Canada."

Franck says in the ideal scenario, she would be able to bring Ahmed and, if possible, other members of his family, to the United States, instead of taking the roundabout route of helping Canadian sponsors bring refugees to places like Edmonton and Toronto.

"It drives me crazy because I would have loved to have them in my own house," she sighs. "In Boston, I couldn't bring them to live in my home. But if I were to drive four hours north, I could have housed them there (in Canada)."

While there are no hard statistics on Americans collaborating with Canadians to privately sponsor Syrian refugees to come to Canada, Franck is among a number of U.S. citizens looking north of the border to help refugees, with funds and other support. One of Franck's friends, also American, pitched in over C$2,000 to help raise funds for Ahmed and his family to come to Canada.

Sandy Eimer, a pharmacist and yoga instructor who owns a yoga studio in the small town of Ankeny, Iowa, reached out to a Canadian woman in Oakville, Ontario, who was raising money to sponsor a Syrian refugee family to Canada.

Eimer sold temporary tattoos to her clients in Iowa to raise money and gave over C$1,000 to the cause.

"It was a simple act to peacefully protest the United States' stance on ignoring humans who are suffering," Eimer said from her home in Ankeny. "I'm grateful for the countries that have kept their arms open."

Eimer is looking forward to seeing how the Syrian girl she helped sponsor will grow up in her new home in Canada.

Franck initially looked at ways to bring Ahmed's family to the U.S., but her hopes dwindled the more she researched.

"The application process is incredibly rigorous. It's around two years for refugees. They get vetted through several international and national agencies," she said. Refugees coming to Canada similarly go through a rigorous vetting process that can take up to two years. Whereas the United States set a goal to admit 10,000 Syrian refugees in 2016, Canada has settled over 40,000 Syrian refugees since November 2015.

"The more I learned about Canada, the more hopeful I got," Franck said.

'I had to do something'

As a 42-year-old mother of two, Franck became passionate about refugee issues when she began to see images of desperate civilians fleeing their country in overloaded boats, washing up on the shores of Greece.

"I thought at the time, 'What is happening?' I began to do a lot of research, figuring out how I can help. I began posting obsessively on Facebook, and I went to Greece myself, to help where I could."

Last year, she said, she got to know Ahmed because he'd connected to one of her friends, who was also volunteering to help Syrian refugees.

"The thing is, he didn't even ask for anything," Franck recalled. "He'd only reached out by Facebook to say 'thank you' for everything my friend was doing."

When Franck got to know Ahmed herself through frequent Facebook messages and phone calls, she began to consider him like a younger brother. The more she learned about his life, the more determined Franck became determined to help his family get out of Syria, where civilians are living in dangerous conditions, including chemical attacks.

A glimmer of hope from Canada

Franck used social media to find "literally any Canadians" who could help. She found that one of the methods to privately sponsor a Syrian to Canada was through the "group of five" (G5) sponsorship. Five Canadian citizens or permanent residents can sponsor a refugee living abroad to come to Canada.

"I literally just needed one Canadian to say, 'OK, I'm interested, and can find four other people to join me.' I told them I'll do everything else. I'll do all the fundraising, I'll take on all the communications and forms, if a Canadian person can bring four other people to sign for them."

Franck discovered a "vast helper network" of Canadian refugee sponsors on Facebook, and she soon had her "group of five" Canadians willing to help get Ahmed to Canada.

"There are a lot of Americans who have a desire to help and perhaps a bit of guilt around not being able to help," observed Camille, one of the five Canadian sponsors, from Edmonton. She prefers to go by her first name only, for privacy reasons.

"One of the people at a church group I reached out to here was American, and he said, 'Wow, this is such great timing. I've been feeling so much guilt around [President Trump's] travel ban.' So, for Americans, this (the travel ban) was a call to action."

She said the enthusiasm of people like Franck was helpful, since fundraising efforts for refugees were difficult in Canada. She said many Canadians were moved to donate by images of Alan Kurdi, a three-year-old Syrian refugee boy whose lifeless body washed up on the shores of Greece after his family's desperate attempt to cross to Europe in 2015. But today, there are fewer donors.

"In Canada, at the time when the photo of Alan Kurdi got people very upset, and they opened up their wallet and gave a lot of money," she said. "But since then, it's become very hard to do fundraising here."

Franck raised C$36,000 dollars for Ahmed, mostly from U.S. donors online. She also managed to secure a home for Ahmed to live in Edmonton for a year. Ahmed has a mother, stepfather and three sisters in his immediate family, but she anticipated that Ahmed, and possibly one of his sisters and her husband in Turkey, could come to Canada first.

But a series of badly-timed events made it impossible for finalization of Ahmed's sponsorship.

Just days before Christmas, on December 19, 2016, Canada announced a cap of 1,000 sponsorship applications for "group of five" privately-sponsored refugees who lack refugee status recognition. Franck and her five Canadian collaborators were shocked by the news, and frantically tried to get Ahmed's application in order on time.

In Syria, the situation devolved from bad to worse for refugees.

Turkey sealed its border in the wake of multiple terror attacks. Snipers opened fired at any refugees trying to cross the border. Two of Ahmed's family members managed to escape, but it was too dangerous for Ahmed to cross the Syrian border to Turkey. Although the Canadian government had temporarily waived the necessity of Syrian and Iraqi refugees to have registered with the UN High Commissioner for Refugees (UNHCR) outside Syria, that regulation was changed back in 2016. Ahmed had to cross Syria's borders to be considered a refugee, and his plan to flee to Turkey was shut down.

Since the Canadian 'group-of-five' private sponsorship limit was reached in January, Franck had to switch gears and ask if religious groups, which could also privately sponsor refugees, were able to put him on their list.

But calls to churches and religious groups were unsuccessful. The Canadian religious organizations she called had already reached their quota of applications and had a lengthy waiting list. In one case, a church in Edmonton was given 30 spots for sponsoring refugees to Canada, but the waiting list was 500 people and counting.

Franck is frustrated, but said she's not giving up.

As of April 2017, Ahmed alone has managed to make the trek out of Syria to Lebanon, but with no job and no connections, his situation remains in peril. Franck is now looking to connect with any Canadian churches or other religious organizations to add him to their list of open spots for sponsoring Syrian refugees.

"We still have all the funds needed, and a free place for them to stay, and the group of five Canadians are still willing to volunteer with resettlement," Franck said. "It would be an easy lift for a church."

Correction April 7, 3:24: a previous version of this article stated that Marcy Franck raised $27,000 US through crowdfunding, but this has been changed to C$36,000.

If citizens in the US want to

If citizens in the US want to sponsor people, they should be focusing on changing their own government's policy rather than complaining about Canada's. If these donors actually want to help people they could help far more people by sending money to groups helping people in the Middle East. Since her friend is now in Lebanon, there are churches or NGOs that would accept $ to give directly to Ahmed, if he has a credit card, paypal, etc, she could send him money directly. Public opinion is changing according to polls, partly because of the illegal border crossings and the government's complete denial of reality.

The United Way is not an independent agent, they are in the business of resettlement and lobbying for changes.