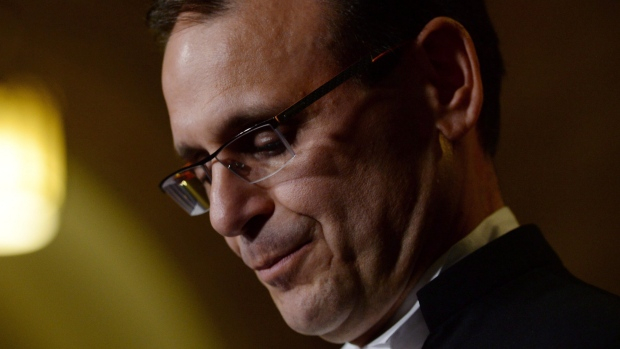 “They’re trying basically to pull the wool over the eyes of the public," Conservative Senator Leo Housakos says. File photo by the Canadian Press.
Previous story
Next story

A Conservative senator is accusing the government and his Liberal-appointed colleagues of trying to hold up a proposed Senate investigation into the federal government’s $373 million interest-free loan to Bombardier.

“They’re trying basically to pull the wool over the eyes of the public. We want to shed light on this; they want darkness on this, because obviously it’s embarrassing for the government,” Conservative Sen. Leo Housakos told National Observer.

Liberal senators voted Thursday to postpone debate on Housakos’ motion asking the Senate transport committee to look into the details of the loan, and to find out how much the investment would return to Canadian taxpayers.

Quebec Sen. Diane Bellemare said she asked for the postponement because the Senate hadn’t had a chance to debate the motion by the time it was raised at the end of the session on Thursday evening. Housakos informed the Senate on Tuesday that he would bring up the motion.

The federal government has so far refused to discuss details of the Bombardier loan. A spokesman for Innovation Minister Navdeep Bains said on Friday that the government wouldn't release any information considered "commercially confidential/sensitive," and wouldn't discuss whether any terms were attached to the loan regarding executive pay or bonuses.

Bombardier has said only that the loan will be paid to the company in installments of $70 million to $100 million until 2020. Bombardier will pay the loan back as royalties on sales of its CSeries and Global 7000 jets, but the loan won’t be repaid in full for as much as 15 years.

“We don’t know when the agreement is scheduled to be terminated, we don’t know the terms, we don’t know if there were any conditions involved,” Housakos said. He pointed to former Finance Minister Jim Flaherty’s insistence in 2013 that Air Canada ban bonuses and large salary increases when the government bailed out the airline’s struggling pension fund.

Housakos’ motion comes days after Bombardier, which laid off 14,500 people last year, including almost 5,000 in Canada, announced that its top executives would get raises of up to 50 per cent this year. Chief executive Alain Bellemare’s compensation increased to $9.5 million last year, up from $6.4 million in 2015. In response to protests, the company announced on Sunday that some of those raises would be deferred until 2020.

His motion would empower the Senate’s committee to compel testimony from senior Bombardier executives and from federal officials involved in the decision to make the loan. The motion asks for a committee report by June 7.

Liberal senators and senators who were appointed by Prime Minister Justin Trudeau but are independent from the Liberal caucus voted to put off debate on the motion on Thursday, which could push it until next week or possibly until after the Senate returns from a break on May 1.

Bellemare, an independent senator who was appointed by former prime minister Stephen Harper but now serves as the Liberal government's deputy leader in the Senate, proposed the postponement. Sen. Bellemare said she wanted to have more time to talk about the proposed inquiry. “Usually when we vote on a motion or when we vote on a bill, or anything we vote on, we vote after debate on it. The debate has not happened,” she said in an interview.

Sen. Bellemare said she also opposes the motion because it deals specifically with Bombardier and it’s not the Senate’s role to investigate individual issues like the loan. Instead, she said she would like to see the Senate investigate the broader issue of the increasing disparity between executive and worker compensation, or widen the scope of the Bombardier inquiry to include other cases when the government has helped out private companies, like the 2009 auto industry bailout.

That’s a “lot of hogwash,” Housakos said. He accused senators who voted for postponement of holding up what he said should be an urgent investigation. But Bellemare said senators have their hands full with two large bills on citizenship and labour organizing rules, and she didn’t see any immediate need to look into the Bombardier loan.

“The only urgency is that for partisan reason he wants to create a debate in the Senate to help their friends in (the House of Commons), and I oppose that,” Sen. Bellemare said.

“I think the Canadian public was very favourable to these bailouts, because they hope … that it’s an investment for middle-class workers in the country,” Housakos said. He said Canadians wouldn't have supported bailouts if they had known the company would increase executive pay to its "fat cats," who, he said, "shouldn’t be using taxpayer dollars to pad their already millions of dollars of pay."

Editor's note: This article was updated at 12:15 p.m. on Saturday to correct the spelling of Alain Bellemare's name.