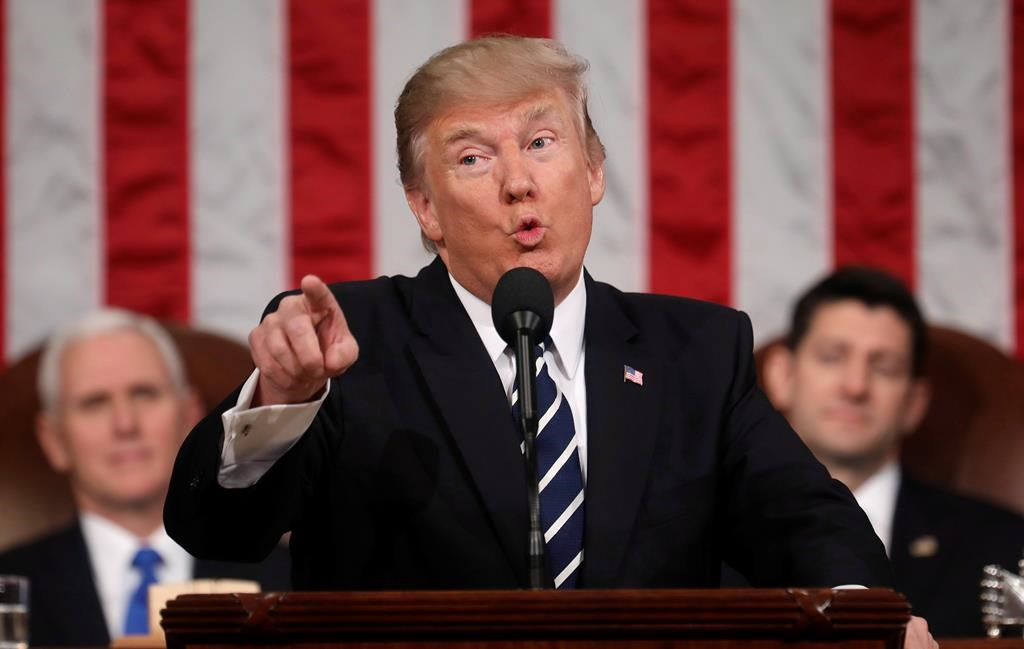 American warships launched dozens of rockets at a military air base in central Syria after a nerve-gas attack that killed scores of civilians including children, U.S. officials said late Thursday, April 6, 2017. File Photo by The Canadian Press
Previous story
Next story

A ghastly chemical attack pushed the Syrian civil war toward a dramatic turning point, with the new United States administration launching a missile strike against the regime of Bashar Assad in a sudden shift in policy.

American warships launched dozens of rockets at a military air base in central Syria after a nerve-gas attack that killed scores of civilians including children, U.S. officials said late Thursday.

The strike came hours after the new Trump administration signalled a reversal of policy with respect to Assad: that the Syrian leader had lost the legitimacy to govern, he had to go, and an international coalition was being assembled to oust him.

President Donald Trump explained why he ordered the military strikes in a statement that did not elaborate on his longer-term political objective for Syria.

"It was a slow and brutal death for so many. Even beautiful babies were cruelly murdered in this very barbaric attack. No child of God should ever suffer such horror."

The administration said it took steps to avoid damage to third-county targets, suggesting Russian officials were given a heads-up aimed at averting conflict.

Assad’s "use of chemical weapons" and "the crimes the Syrian regime has committed against its own people," Trudeau said, "cannot be ignored."

"These gruesome attacks cannot be permitted to continue operating with impunity," the statement continues. “This week’s attack in southern Idlib and the suffering of Syrians is a war crime and is unacceptable. Canada condemns all uses of chemical weapons."

"This is a war crime and the international community must stand firmly against such things," he said after a day of meetings in New York.

"We condemn in the strongest of terms (these) heinous attacks against civilians, children, by chemical weapons."

He promised Canada would be involved in the United Nations process to investigate and punish the perpetrators of the chemical attack that killed civilians, as seen in grotesque images that have shocked the world.

Rex Tillerson said a coalition-building effort has already begun, with the aim of ousting Assad. He did not specify whether the effort would be primarily diplomatic, military, or both — but he made clear it's underway.

"There would be no role for (Assad) to govern the Syrian people," Tillerson said, reversing his own statements of a few days earlier.

Asked whether he was organizing an international coalition, he replied: "Those steps are underway."

That was an apparent flip-flop from his statement a few days earlier that Assad's fate was up to the Syrian people. That was before gas was dropped on the city of Khan Sheikhoun, one of the few remaining rebel strongholds.

Some of Tillerson's critics blamed his laissez-faire statement for emboldening Assad. Yet the Trump administration also blamed past president Barack Obama, who famously declared chemical weapons a red line not to be crossed — then backed down.

It's unclear whether something else has changed since Obama's presidency: Russia's role.

The Kremlin convinced the U.S. in 2013 not to attack, on the promise that it could collect the Syrian chemical arsenal. It has continued to support him, consistently holding off international efforts at regime-change.

That may be eroding — perhaps.

The Kremlin is still sending mixed messages. On the one hand, the Russian government says its support for Assad is "not unconditional." On the other hand, a spokesman says he's Syria's legitimate leader; also, Russia Today reports that President Vladimir Putin has said it would be unacceptable to make "groundless" accusations about Assad's role, without proof.

On Thursday, Trudeau was asked whether he doubted this was Assad's work — he didn't reply directly; he said simply that it's important to have all the facts before moving ahead.

The prime minister was in New York on Thursday for meetings with YouTube CEO Susan Wojcicki and Antonio Guterres, the new secretary general of the United Nations.

Facts of Syrian gas attacks need to be established to assign blame: Freeland