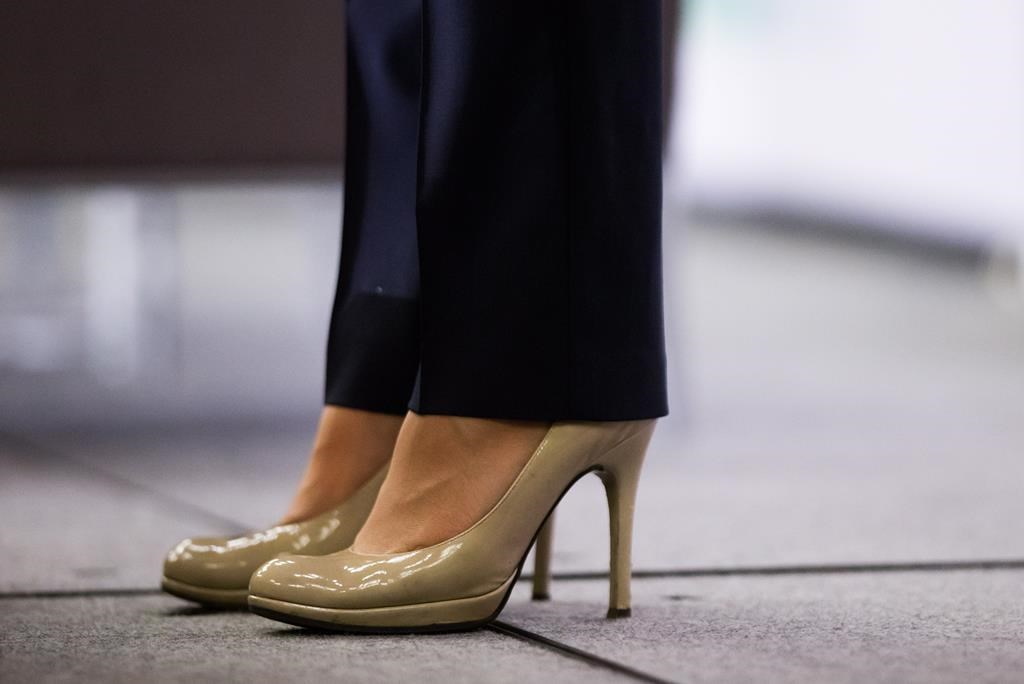 A move by the British Columbia government to ban mandatory high heels in the workplace is being lauded as a step towards ending discriminatory dress codes.

Requiring women to wear high heels on the job is a health and safety issue, said Labour Minister Shirley Bond.

"This change will let employers know that the most critical part of an employee's footwear is that it is safe," she said in a statement on Friday. "I expect employers to recognize this very clear signal that forcing someone to wear high heels at work is unacceptable."

"It's part of the overall issue of sexualizing women in the workplace," he said.

The new regulations will help prevent women from being forced to wear clothing they're not comfortable with and could prevent some sexual harassment in the workplace, Durling said.

"I think there are gains being made. They're slow and they're prudent, but they're steps in the right direction."

Green party Leader Andrew Weaver introduced a private member's bill last month on International Women's Day, that would have made it illegal for employers to require women to wear high heels at work.

Instead of implementing the bill, the government amended the footwear regulation under the Workers Compensation Act.

The amended regulation says employers cannot force workers to wear footwear with a design, construction or material that inhibits the worker's ability to safely perform their job. It says employers have to consider slipping, ankle protection, foot support, muscle or bone injuries, and electrical shock when considering mandatory footwear.

Weaver said he welcomed the change, adding that he has recently heard from people in "countless sectors" who were forced to wear high heels at work.

"They talked about sexism, objectification, bleeding feet, sore knees, hips, and backs, long-term damage, and called for this practice be officially changed," he said in a statement.

"We are very far from an inclusive, gender-equal province. But this is an important step in the right direction."

The changes will be enforced by WorkSafeBC, the body that oversees worker safety in the province.

Guidelines for employers and employees will be developed by WorkSafeBC and are expected to be available by the end of the month.

Ian Tostenson, president and CEO of the B.C. Restaurant and Food Services Association, said his group supports the new rules, and added that banning mandatory high heels could actually be beneficial for restaurants.

He said it may now be easier for establishments to attract staff, because they'll have flexibility to wear what is comfortable for them.

"Everybody's going to find whatever's appropriate for them to keep our workers safe in the workplace," Tostenson said.

High-heels debate should include industries other than restaurants: experts