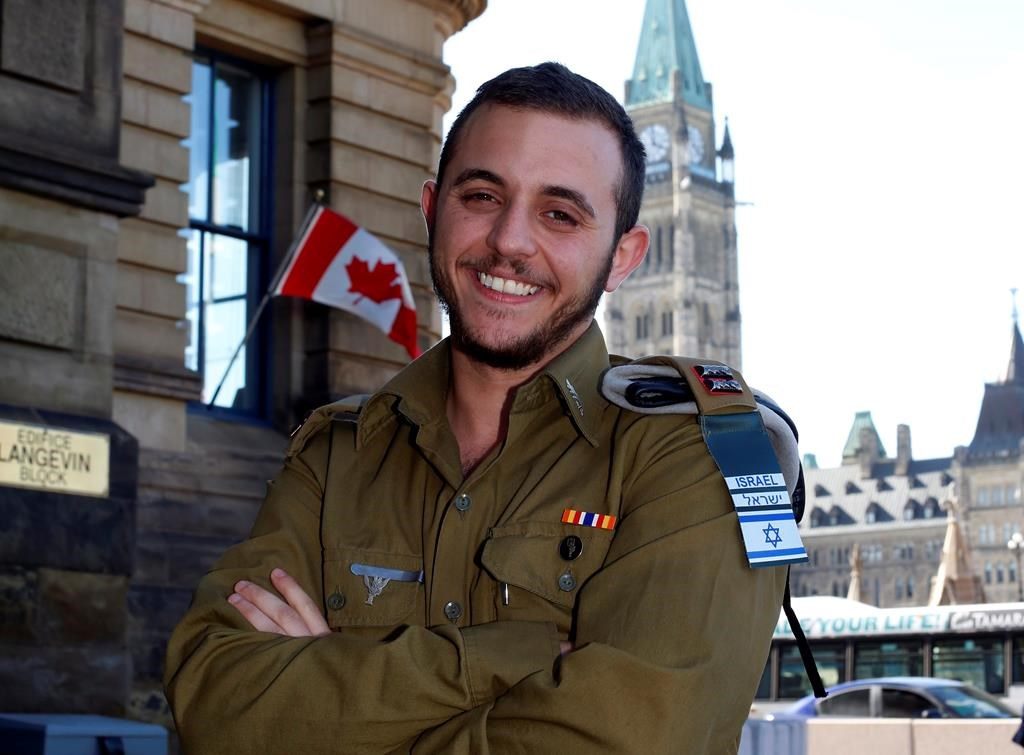 Shachar Erez recalls the day five years ago when, as an 18-year-old female Israeli soldier, the time had come to tell his commanding officer something profound about himself — that he believed he was a man.

He had already broken the news to his family, including his two younger brothers, and it had come as no surprise. When he was two, he asked his parents to cut his hair; at five, his dresses and skirts were tossed out.

But what would his army commander think? She was only 19, herself. "She only asked me one thing: how can I help? It was amazing."

The answer changed Erez's life, and set him on a course to become an international ambassador of sorts for the Israel Defence Forces (IDF) on LGBT rights after becoming its first and highest-ranking openly transgender officer.

It was in that role that he was in Ottawa recently to meet senior officials in the Canadian Forces, who are still in the throes of wrestling with their own policy on transgender issues in the military.

The Forces long-awaited policy on transgender personnel was expected at the end of last year, but it now appears tied up in the broader policy review of the military, which is also delayed.

It will build on transgender guidelines adopted in 2012. The Forces are hoping to give commanding officers a checklist on variety of things, including how to deal with uniforms and bathrooms.

How to better educate personnel to lessen the likelihood of discrimination and abuse is also expected to be a feature of the new policy.

Erez said that's a message he delivered during his recent meeting at National Defence: "How to create a better environment for trans people to serve and how to educate the units to be inclusive and thoughtful and respectful."

He came out of the meeting concluding that Canada has a very "progressed military, very aware of a lot of the situations and complexity and the capability of the trans soldier to have a successful service."

He said it was good to hear "we are both dealing with the same questions and the right questions."

But Canada still has a long way to go, to catch up with the IDF on the issue.

Erez is featured on the Israeli military's website, accompanied by the remarks of a brigadier general in charge of LGBT policy.

Defence Minister Harjit Sajjan is promising steps forward for the Canadian Forces, but he had few specifics when asked recently in Ottawa.

"When we look at the Canadian Armed Forces, we are extremely open and making sure that we allow all Canadians to have an opportunity to serve their country," he said.

No one knows for sure how many transgender personnel are in the Forces but some estimates peg the number at 200.

Erez said he's never experienced any sort of discrimination in the IDF. It paid for his sex-reassignment medical procedures, something that started happening in Canada after 2012.

He served as a commander of 70 personnel in the IDF's behaviour analysis unit after entering officer training, after he came out. It was rewarding work that focused on finding ways to make the IDF more efficient and that had him working with numerous professionals and academics.

He is now based at IDF headquarters in its planning branch. In the summer, he expects to be promoted to the rank of captain. One day, he would like to go to university to study engineering.

In the meantime, he said he wants to be the best soldier he can be — a goal he says has been enhanced by his own personal experience.

"Studies have shown is that diversity makes organizations stronger," he said.

"Trans people, especially in a military that is professional . . . when they know they had to overcome obstacles, they are going to be the best soldier you could hope for."