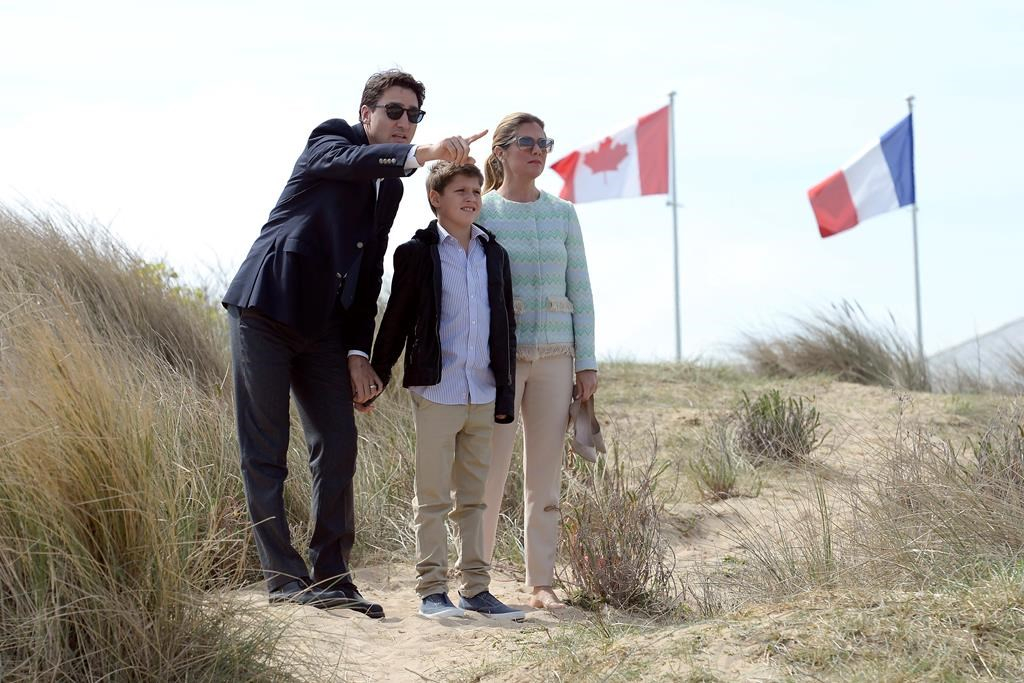 Bashar Assad's days as president of Syria are numbered, Prime Minister Justin Trudeau suggested Monday as more hostile talk from international powers continued to amplify the threat of a military escalation in the Middle East.

The way forward in Syria can't include Assad, whose recent chemical attack against his own people were abetted by those countries — Russia and Iran — that have allowed him to remain in power, Trudeau told a news conference.

"There is no question that anyone who is guilty of the types of war crimes against innocents, against children, that Assad and his regime are needs to be held to account," he said during a visit to Juno Beach to commemorate Canada's Second World War dead.

"We need to move as quickly as possible towards peace and stability in Syria that does not involve Bashar al-Assad."

Trudeau was, however, non-committal when it came to the question of how to remove Assad from power, and whether Russia should be punished for supporting him. Canada remains open to imposing new sanctions against Russia in concert with its allies, he said, but Russia must also be part of the solution for bringing peace to Syria.

"Countries that have been supportive of the Assad regime bear some of the responsibility for the chemical attacks on innocents," he said.

"And those countries must also be part of the solution as we hold the Assad regime to account and as we move tangibly forward as an international community to ending this conflict in Syria."

The U.S. fired 59 cruise missiles at a Syrian airfield last week in retaliation for the chemical attack, sparking tough talk and warnings from all sides.

On Monday, the tension was only mounting.

The degree of hostility intensified on multiple fronts between the U.S. and its allies, versus Assad and his backers Iran and Russia. The U.S. said it has evidence Russia's military helped cover up the use of chemical weapons.

And the U.S. appeared to threaten to strike Assad again, expanding — or so it seemed — its possible justifications for future strikes.

"I will tell you: ... if you gas a baby, if you put a barrel bomb into innocent people, I think you will see a response from this president," Spicer said. Later, however, the administration was playing down the idea of barrel bombs as a red line.

"Nothing has changed in our posture," the White House said in a statement.

That same day, the administration suggested Russia broke an international deal to gather Assad's chemical weapons. In fact, an administration official was cited telling the Associated Press that it actually helped Syria cover up its use of the illegal weapon.

The AP reported that the official said a Russian-operated drone flew over a hospital in Syria as victims of the attack were rushing to get treatment; then, hours later, a Russian-made fighter jet bombed the hospital in what American officials believe was a coverup effort.

That threat reportedly came Monday from a coalition of Assad military backers including Russia and Iran. Various news reports said that coalition released a statement with a warning: "From now on we will respond to anyone, including America if it attacks Syria and crosses the red lines."

The statement reportedly said: "America knows very well our ability and capabilities to respond well to them."

The U.S. is hinting that its true long-term purpose in striking the airfield was to send a political message — that long-term peace in Syria will require changes in government, and the countries backing Assad should stop keeping him in place.

Yet the U.S. has sent mixed messages about what it wants in the short term; it's not even clear whether Washington intends to help oust Assad.

The Trump administration says that ambiguity is intentional. One government official after another has suggested they would like to see Assad gone, but not elaborated on whether it's an immediate U.S. priority.

Trump's spokesman says that lack of clarity is no accident.

"He's going to keep his cards close to the vest," Spicer said of the president. "But make no mistake: he will act."

Trudeau was in France for two days of overseas commemorations for Canadian soldiers killed in the two world wars, including the 100th anniversary of the Battle of Vimy Ridge and Canada's role in D-Day on June 6, 1944.

"The men who fought in 1944 were carrying the legacy of those who risked their lives at Vimy Ridge in 1917," Trudeau said after walking the beach with his wife Sophie Gregoire Trudeau and their son Xavier.

But there was no escaping the here and now, with the attack in Syria still fresh on everyone's mind. And the irony wasn't lost on Trudeau.

The prime minister left no doubt that he considered Assad's government responsible for last week's chemical attack, which killed more than 80 people, including many children, in the Syrian province of Idlib.

Russia and Iran were also at least partly to blame, he added, because of their support for Assad's murderous regime, which international observers believe has used chemical weapons dozens of times.

Asked whether he feared the world was on the verge of a new war, Trudeau said the international community needed to come together more now than ever and address its challenges together.

"The raging civil war in Syria, the violent conflicts around the world," he said, "require an international community that pulls together, that holds each other to account and that strives everyday not to repeat the terrible mistakes of the past."

What makes anyone think there

What makes anyone think there's a military solution to the quagmire in Syria? The quagmire is largely the result of previous western military misadventures. When will we in the west stop destroying middle eastern lives and countries?
The fact that Ratheon's stock value rose by about $1B after last week's American attack shows who profits from our endless wars. The profiteers hope the fighting will go on forever. They don't care about the fact that we risk starting WW III.
War profiteering is shameful. Wars of aggression are shameful. Canada ought to stop cooperating with american belligerence.