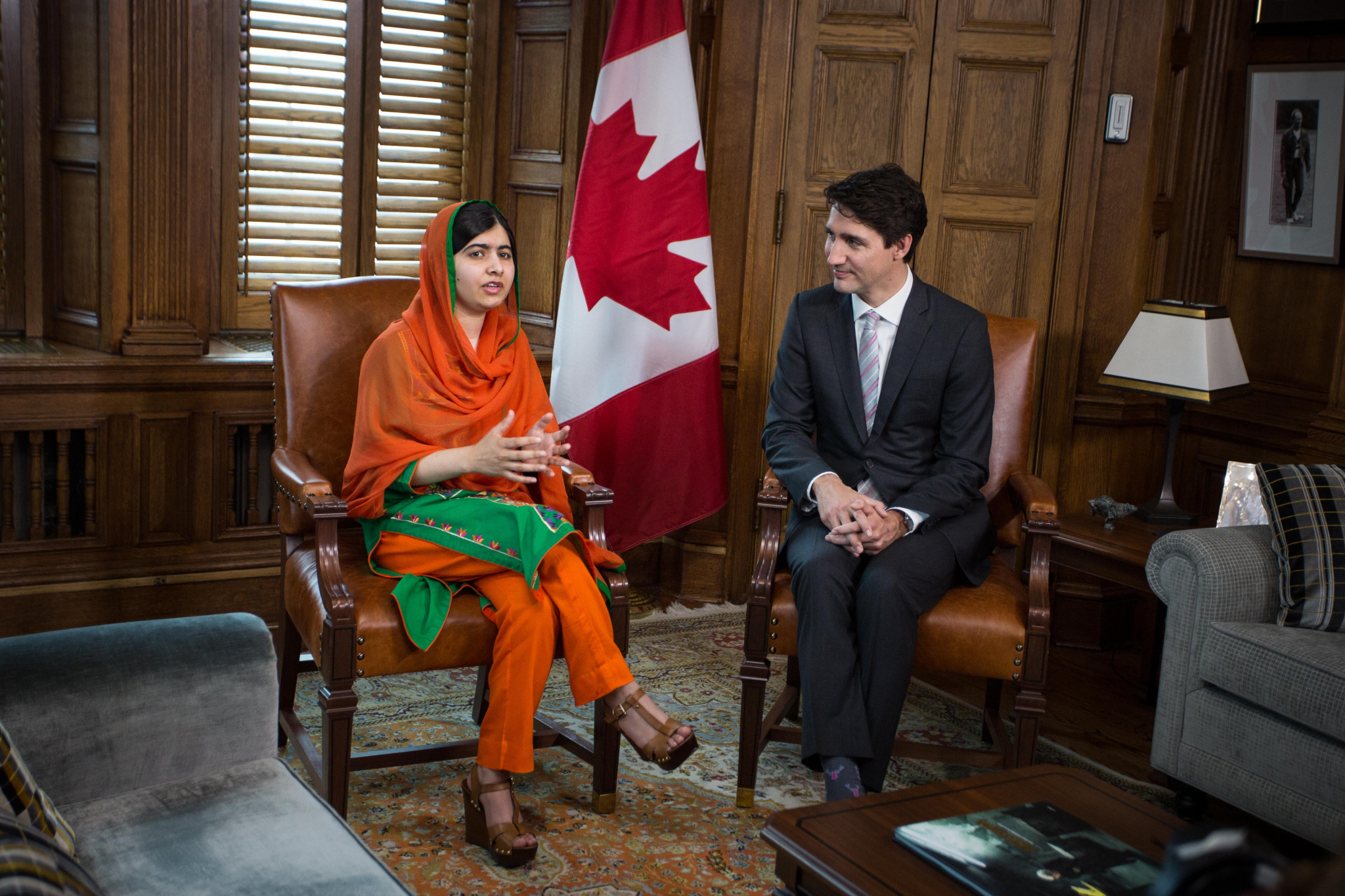 It was a ceremony less than 15 minutes long, but it was more than three years in the making.

On Wednesday, renowned Pakistani activist and Nobel laureate Malala Yousafzai was given honorary Canadian citizenship during a rare commemoration on Parliament Hill.

Accompanied by her parents, she accepted a certificate and Canadian flag from Prime Minister Justin Trudeau, before making history as the youngest person ever to address Parliament. Her parents wiped tears from their eyes, and Yousafzai clutched her heart at she was given a standing ovation after standing ovation.

Adjusting her head scarf in the House of Commons, she called on all Canadians to demonstrate leadership in advancing education for girls around the world. She focused on the plight of refugees, who are five times more likely to be out of school than the global average, according to the UN Refugee Agency.

"I know where I stand," said the 19-year-old champion of female education after minutes of thunderous applause.

"If you stand with me, I ask you to seize every opportunity for girls' education in the next year... We should not ask children to flee their homes to also give up their dreams, and we must recognize that young refugees are future leaders on whom we all depend for peace."

A "model of kindness"

Yousafzai was only 11 years old when she started blogging anonymously for BBC Urdu from the Swat Valley in Pakistan, describing life under Taliban occupation. In October 2012, a Taliban gunman attempted to kill her for speaking out on the right of girls to attend school, and her survival brought her campaign to new international prominence.

In 2014, she became the youngest person to be named as a co-recipient of a Nobel Peace Prize, and today, works as a UN Messenger of Peace. She co-authored the best-selling book, I am Malala, and founded the non-profit Malala Fund, which advocates for the resource and policy changes required around the world to ensure all girls finish at least 12 years of schooling.

Yousafzai was originally supposed to receive the honorary citizenship in October 2014, but that event was cancelled for security reasons after a lone gunman stormed Parliament Hill, shooting and killing an honour guard — Cpl. Nathan Cirillo — at the nearby National War Memorial. During her speech, Yousafzai condemned both that attack and the recent shooting at a Quebec City mosque, which left six dead.

In his own address on Wednesday, Trudeau said Yousafzai is the "true embodiment of leadership and service" and a "model of kindness."

"Malala, you have given light to boys and girls mired in darkness, and you have challenged women and men of all backgrounds to be better so we may do better," he told dignitaries, MPs, and guests.

"Yours is a story of an ordinary girl doing extraordinary things, an everyday hero, a trailblazer and a teenager; a renegade and a reader, a fearless advocate and a girl who wants nothing more than to see more kids in classrooms..."

An inspiration to women and girls

Yousafzai is the sixth person in history to receive honorary Canadian citizenship and the youngest. The status has also been granted to the Dalai Lama, the Aga Khan, Nelson Mandela, Burmese activist Aung San Suu Kyi and Swedish diplomat Raoul Wallenberg.
She was greeted on Wednesday by dozens of adoring fans, who stood outside Centre Block on Parliament Hill awaiting her arrival, waving banners and signs of support. Among them was Carleton University student Sabina Haque, who called Yousafzai “a symbol of women empowerment.”

“But Malala started on her own with just a blog during the crisis in her community. She established herself even with the lack of education around her. It’s really nice to have someone like Malala — a young women, a woman of colour from a community where she was undermined for her gender — be able to rise above and stand up for girls and education.”

Syed Aziz, president of the Canada-Pakistan Association of the National Capital Region, also said Yousafzai’s citizenship is an “honour,” particularly as U.S. President Donald Trump cracks down on refugees and Muslims.

“As a Pakistani-Canadian it’s a great honour for us that she has got this citizenship, based on the educational aspect,” the father of three girls told National Observer. “Over the centuries, girls’ education has been suppressed... The timing is also excellent, because on one side of the border, we are offering honorary citizenship to a Muslim-Pakistani girl, and on the other side, they are cracking (down on Muslims). It’s a quite a contrast.”

— with files from Stephanie Levitz, The Canadian Press

Malala Yousafzai back for honorary Cdn citizenship, delayed by 2014 shooting