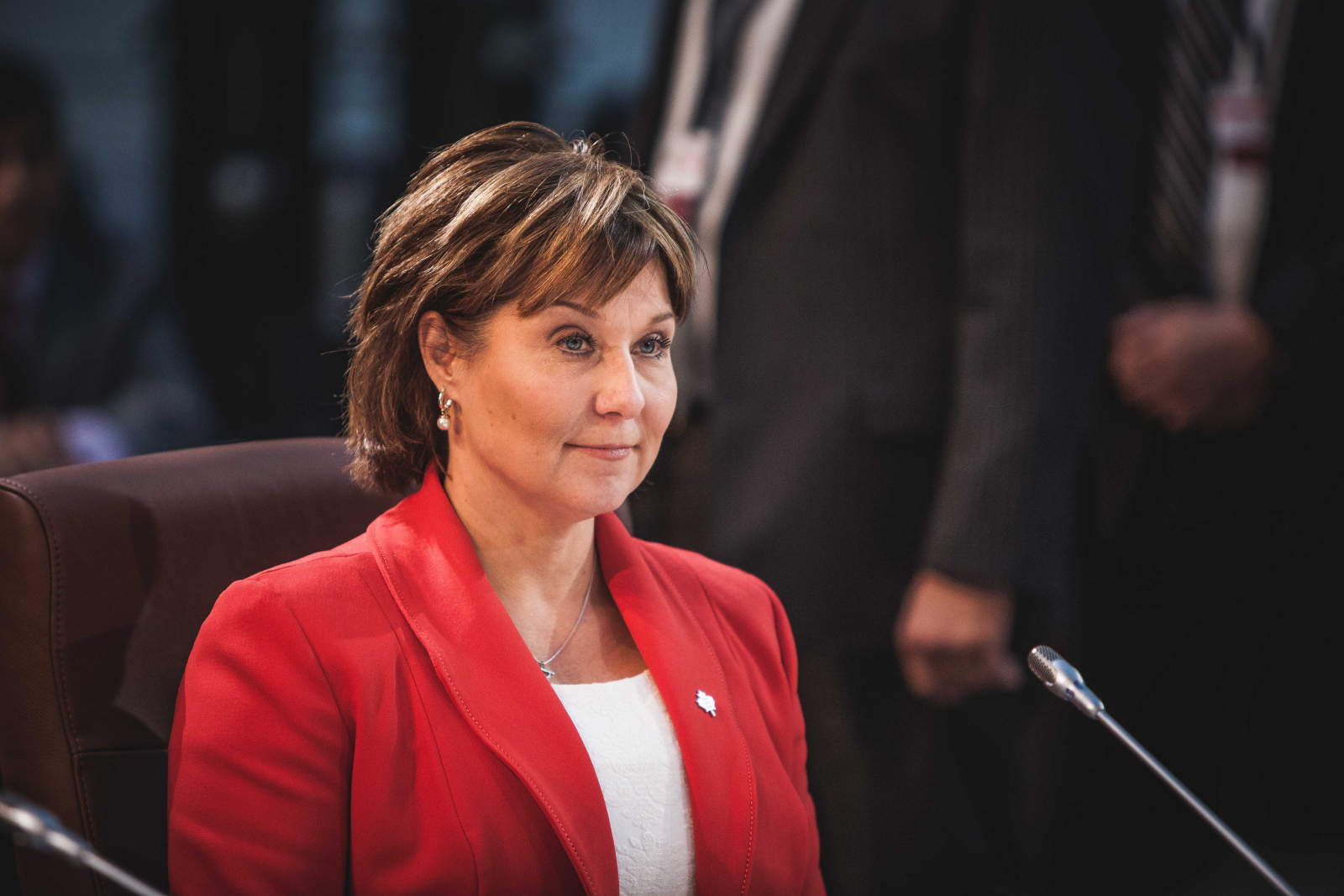 The BC Liberals have agreed to put their financial ties to a Texas multinational pipeline company and their ethics to the test at the province's Supreme Court less than a week before British Columbians go to the polls for a May 9 general election.

The court case was launched in January by Pipe Up Network and Democracy Watch. It began when the two advocacy groups filed a petition asking the Supreme Court to force the B.C. government, Premier Christy Clark, Environment Minister Mary Polak and Natural Gas Development Minister Rich Coleman to respond to conflict of interest allegations. The groups alleged that the BC Liberal government's support for a major pipeline project was unethical after the political party accepted hundreds of thousands of dollars worth of donations from the oil and gas industry.

Kinder Morgan is proposing to triple the capacity of its existing Trans Mountain pipeline so that it can carry up to 890,000 barrels of diluted bitumen from Alberta's oil sands to Burnaby, B.C.. While proponents say the project will create thousands of jobs and boost the economy, detractors express concern about potential environmental impacts arising from an expected five-fold increase in tanker traffic along the Burrard Inlet.

A court date was initially set on Wednesday, April 12 to review the allegations, but the BC Liberal Party's lawyer said he'd only been hired the day before and needed more time to respond. Lawyers on both sides of the legal battle agreed to adjourn the case until May 3, following an agreement that the BC Liberals would file their responses by April 24.

The two advocacy groups argued in their petition that the Clark government's review of the Trans Mountain pipeline expansion was influenced by large political donations to the BC Liberals by Kinder Morgan, the Canadian Association of Petroleum Producers, and other companies that stand to benefit from the new pipeline. According to the groups' affidavit, these companies have contributed hundreds of thousands of dollars to the BC Liberal Party since 2011. None of the groups' allegations have been proven in court.

"We're asking the court to quash their pipeline approval, because we believe there's been bias," said Pipe Up Network spokesperson and policy analyst Lynn Perrin. "We feel that it's absolutely correct to name the premier in this action because we think she's in a conflict of interest."

The B.C. government has no legal power to block the Kinder Morgan Trans Mountain approval, as the pipeline was approved by the federal government in November. In 2010, the B.C. government signed an equivalency agreement to forfeit its own environmental assessment. That agreement gave Ottawa the final say over five pipeline projects, including the Kinder Morgan expansion. Last year, the B.C. Supreme Court ruled that the province could not offload its duty to consult for environmental approvals, so the province did its assessment, ultimately approving the Trans Mountain pipeline expansion.

The groups say Premier Clark is in a conflict of interest because she has received payments totaling over $300,000 from the BC Liberal Party, over the period of the Kinder Morgan Trans Mountain pipeline review and approval process. The groups allege this payment, which is on top of the nearly $200,000 she earns annually as premier, puts her in potential conflict, because she likely would not be receiving this extra income were it not for the funds raised from large corporations.

"Everyone has known for years how controversial this money is," he said. According to the B.C. conflict of interest laws, even the appearance of a conflict can land political parties and candidates in hot water, he added.

"If a reasonable person, being informed of the facts, can say, 'yes, that likely had an influence', then you wouldn't be allowed to take part in the decision," he said, of the BC Liberal government's approval of the Kinder Morgan pipeline expansion.

He's calling for an audit of political contributions going back five years to the last election to help increase transparency around money in B.C's politics, which The New York Times described as a "Wild West" for corporate donations.

Jason Gratl, the lawyer representing Democracy Watch, said he wasn't sure if the BC Liberals were intentionally stalling, but that was strange that it took so long to for them to hire a lawyer. He said they would have known about this court case since at least March 21, if not earlier.

"It's very peculiar, but the BC Liberals waited until the last moment to hire a lawyer," said Gratl. Gratl spoke to National Observer on Wednesday, shortly after the court hearing was adjourned.

Gratl said that he believes his clients have a sound argument, if any independent observer can look at the donations to the BC Liberals by oil and gas companies and conclude that these might have "consciously or unconsciously" influenced their review of the pipeline expansion.

"I think to any reasonable person this doesn't pass the smell test," Gratl said.

Kinder Morgan and the BC Liberal Party did not respond to requests for comment.

BC Green Party leader Andrew Weaver said there is little doubt that large corporate donations hold sway over government policy decisions, whether it be about oil pipelines or real estate.

"It's paid access. They're looking for access and for influence. That's why they're making these donations," he said.

Asked if such large donations by special interests affect his own party, Weaver responded: "We don't receive any donations from corporations or unions. The answer is unequivocally no."

He said donations to the BC Greens soared to record highs, with a 93 per cent increase over the party's 2015 revenue, once the party decided to ban union and corporate donations. Weaver criticized the BC NDP for not doing the same, even though the party has recently pledged to introduce legislation banning corporate donations if they win the upcoming election.

"For four years, the BC NDP were quiet on this issue...and they've taken donations from companies like Kinder Morgan as well," he said.

The BC NDP has received substantially fewer donations from oil companies compared to the BC Liberals, receiving a total of $51,210 from Kinder Morgan, the Canadian Association of Petroleum Producers, the Canadian Energy Pipeline Association and oil sands producers, according to research by Dogwood BC.

When asked about this contribution, and whether the BC NDP would disclose who has donated funds to individual candidates, BC NDP spokeswoman Jen Holmwood said she needed more time to respond. But she also sent National Observer a statement that outlined the BC NDP's overall policy on political financing.

“The only way to get big money out of politics is to defeat Christy Clark, and that’s our top priority. John Horgan will ban corporate and union donations, clean up the Wild West of political cash, and work hard to stop Kinder Morgan.”

Correction April 14, 2017: The name of Dogwood BC has been corrected.

The Clark government is past

The Clark government is past its 'best before' date. Time for some fresh faces, views, opinions. The Gordon Campbell and now C. Clark governments were Harper lapdogs and Canadians across the country punished the Conservative government of Harper because they no longer identified with them. Change is good for everyone. It will be interesting to see if the Treasury is empty like Alberta's treasury was after 40 years of Progressive Conservatives at the till.

Correct idea. However, the BC

Correct idea. However, the BC Liberals were elected in May 2001, while the Conservative Party of Canada was established in December 2003, so they couldn't have been Harper lapdogs yet.

It's not about change being good. It's all about the proper political ideals. BC had abandoned both the Liberal and Conservative parties back in 1952, a streak that continued until 2001. Apparently there are people from out-of-province who insist BC is better off despite the Liberals being in power since 2001.

When West Kootenay Power was

When West Kootenay Power was up for sale, way back in '03, instead of BC Hydro buying its dams on the Kootenay river, Kinder Morgan purchased them.

So who the hell let that power company go? Who let thousands of British Columbians in the Kootenays pay their electrical bills to a U.S. company?

Gordon Campbell's BC Liberals did.

And Christy Clark's BC Liberals are no different.

There are so many reasons to bring charges against her government. The sale of West Kootenay Power is just another betrayal in an incredibly long list of their betrayals.

Christy & Co. are calculating that by the time there is any result from the legal proceedings the election results will be a done deal and the legal action, even if successful, will be too little, too late: an exercise in closing the barn door only after the horse has bolted.