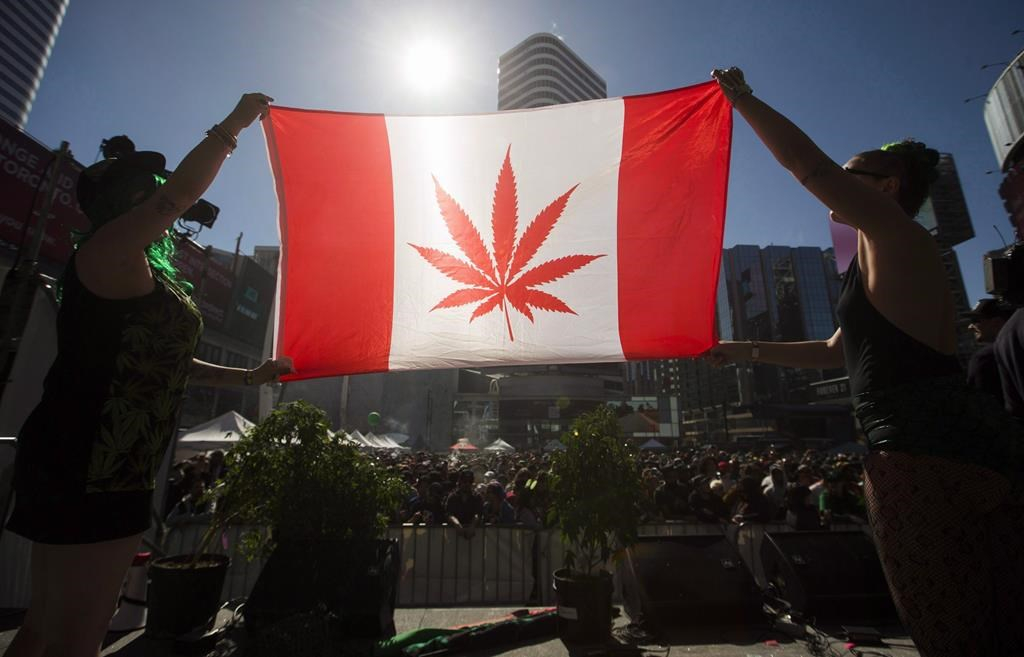 Two people hold a modified design of the Canadian flag with a marijuana leaf in place of the maple leaf during the "420 Toronto" rally in Toronto, April 20, 2016. File photo by The Canadian Press
Previous story
Next story

Adults 18 and older will be able to legally buy and cultivate small amounts of marijuana for personal use, while selling the drug to a minor will become a serious new criminal offence under the federal Liberal government's proposed new legal-pot regime.

A suite of legislation introduced Thursday would, once passed, establish a "strict legal framework" for the production, sale, distribution and possession of pot, and make it illegal to sell cannabis to youth or use a young person to commit a cannabis-related crime.

New penalties would range from a simple police citation to 14 years behind bars.

"If your objective is to protect public health and safety and keep cannabis out of the hands of minors, and stop the flow of profits to organized crime, then the law as it stands today has been an abject failure," Public Safety Minister Ralph Goodale told a news conference.

"Police forces spend between $2 billion and $3 billion every year trying to deal with cannabis, and yet Canadian teenagers are among the heaviest users in the western world ... we simply have to do better."

They would also be permitted to grow up to four plants per residence for personal use, as well as make legal cannabis-containing products at home.

The government says it intends to bring other products, including pot-infused edibles, into the legalized sphere once federal regulations for production and sale are developed and brought into force.

Current system is "failing our kids"

"The current system of prohibition is failing our kids," said Liberal MP Bill Blair, a former Toronto police chief and the government's point man on the legalized-marijuana file.

The plan is to have a legalized-pot system in place by the end of June 2018, he added.

"We have a responsibility to act as expeditiously as we can ... we can't drag our feet; we aspire to get this done as quickly as possible."

Under the proposed Cannabis Act, it would remain illegal to import cannabis and cannabis products, and to export them without a valid permit. Permits may be issued for certain purposes, such as medical cannabis and industrial hemp.

It would also be against the law to sell cannabis in a package or with a label that could be construed as appealing to young people, to include testimonials or endorsements, or to depict a person, character or animal.

The government also aims to establish "significant penalties" for those who engage young Canadians in "cannabis-related offences" and a "zero-tolerance approach" to drug-impaired driving, along with a "robust" public awareness campaign.

The RCMP and the Canadian Border Services Agency plan to work together, along with local police, to uphold laws governing illegal cross-border movement of cannabis.

Goodale made a point of noting the existing laws remain in effect until the new legislation is formally proclaimed the law of the land.

"As the bill moves through the legislative process, existing laws prohibiting possession and use of cannabis remain in place, and they need to be respected," he said.

"This must be an orderly transition; it is not a free for all."

Provinces, territories and municipalities would be able to tailor rules for their own jurisdictions, enforcing them through mechanisms such as ticketing.

They will also be permitted to set their own licensing, distribution and retail sales rules, establish provincial zoning rules for cannabis businesses and change provincial traffic safety laws as they deem necessary.

Health Minister Jane Philpott says criminalizing cannabis has not deterred use among young people, noting products like alcohol and tobacco are legally available with restrictions.

Once passed, the Liberal bills introduced today would make Canada the first member of the G7 to legalize marijuana for recreational use across the country.

— With files from Jim Bronskill