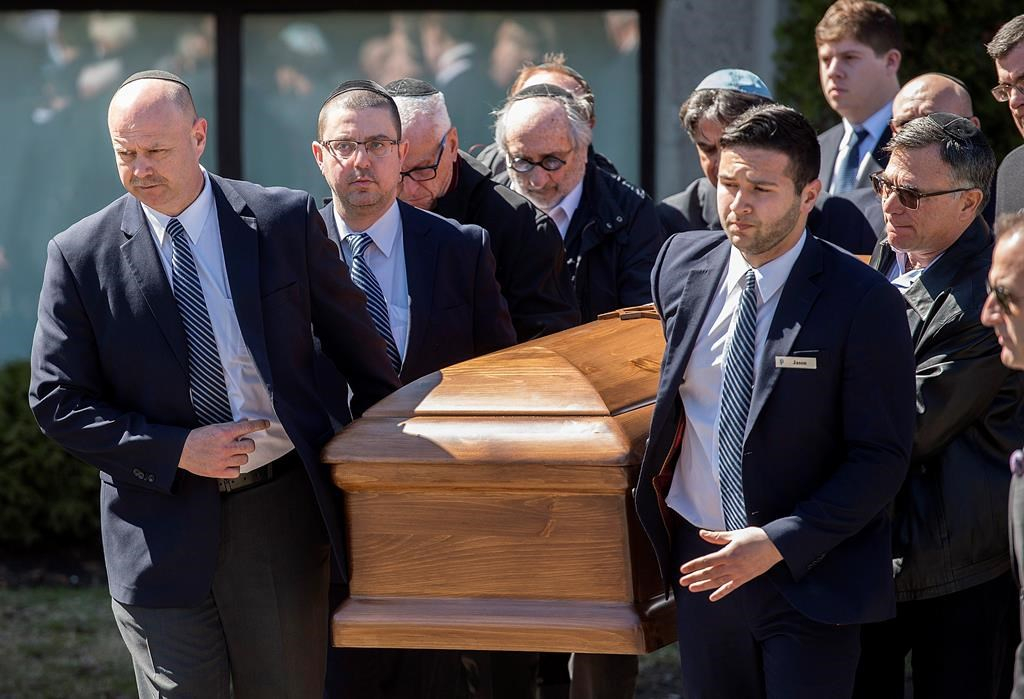 The coffin with the remains of Dr. Mark Wainberg is carried from the synagogue following his funeral in Montreal, Friday, April 14, 2017. Photo by The Canadian Press
Previous story

Dr Mark Wainberg was remembered during his funeral on Friday as a trailblazing HIV researcher and patient advocate who was equally dedicated to his family, his Montreal community, and friends.

Wainberg's plain wooden coffin sat at the front of the Tifereth Beth David Jerusalem Congregation, the synagogue he attended for many years.

He drowned on Tuesday while swimming with his son in rough waters off Bal Harbour, Fla. He was 71.

Wainberg's son told the funeral that the loss of his father was a loss for the whole world.

"How many people in this world can say their work saved millions of lives?" Zev Wainberg said in a tearful eulogy.

Wainberg was part of the medical team that discovered the first antiviral drug to treat patients with the human immunodeficiency virus, or HIV.

He started the first AIDS labs in Canada in the 1980s, which grew to be among the largest in the country, his son said Friday.

More recently, he served as director of the McGill University AIDS Centre in Montreal.

In an emotional moment, the younger Wainberg recalled his father's love of swimming in the Florida ocean, and of trying to pull him from the waves on Tuesday as he died.

"I tried to save him and I could not," Zev Wainberg said.

It was, he added, "a small comfort to know he died doing something he loved very much."

Throughout the hour long service, Wainberg was described as a world-renowned scientist, an advocate, a mentor to thousands of students, and a proud Montreal Jew.

He was dedicated to his wife of 48 years as well as his two sons and his grandchildren, the mourners heard.

Not content to limit his contributions to the laboratory, Wainberg became an outspoken advocate for people with HIV at a time when such a move was neither politically correct nor popular, Rabbi Yechezkel Freundlich told the packed synagogue.

Speaking outside the ceremony, one HIV/AIDS activist described Weinberg as "a tremendous ally" in the fight for access to treatment and for equal rights for people with HIV.

"He supported us from a place of passion and reason, and whenever he spoke, people listened," said Ron Rosenes.

Wainberg was made an Officer of the Order of Canada in 2001, and was inducted into the Canadian Medical Hall of Fame in 2015.

In 2008, Wainberg was named a Chevalier de Legion d'honneur, the highest honour given by France.