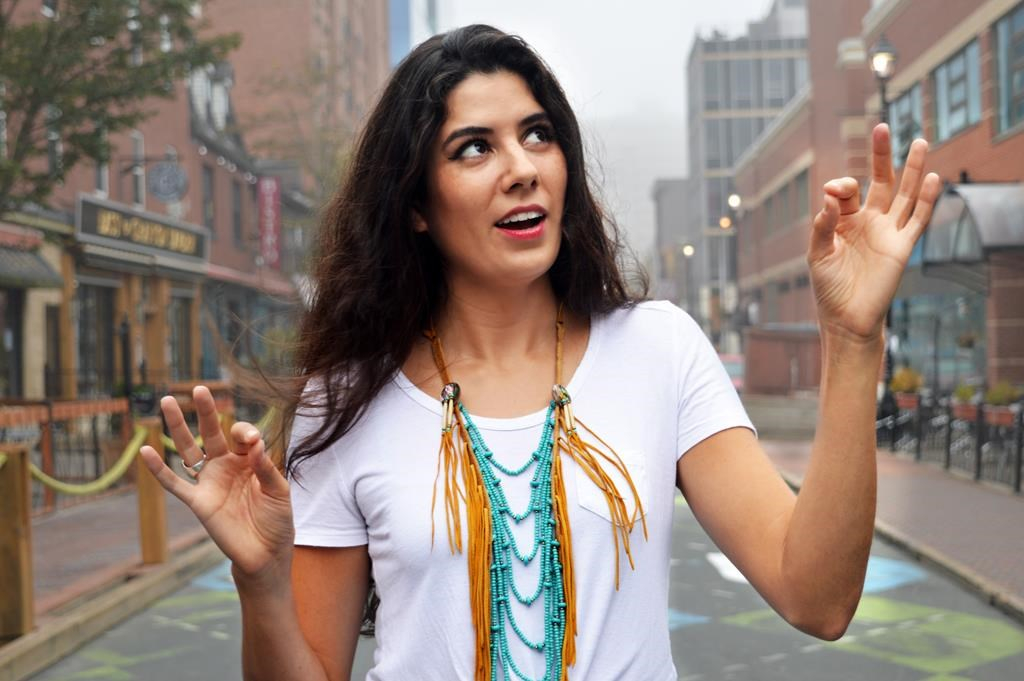 A poet didn't make history in Halifax last week, but she might have been the catalyst for changing how the city commemorates its history.

Rebecca Thomas, Halifax's 31-year-old aboriginal poet laureate, went before Halifax council with a poem chiding councillors for shutting down debate last year over how the city commemorates its controversial founder.

Edward Cornwallis issued a bounty on the scalps of her Mi’kmaq ancestors — men, women and children — but is still honoured with a park, statue, and even a street within a stone's throw of the city's Mi’kmaq friendship centre.

Moved by her poem, a rookie councillor decided council needed to revisit the issue sooner than later — it will debate his motion at its next meeting.

In an interview Saturday, Thomas said she had wanted to achieve something at city hall, so she made her poem an invitation "to come meet me in the middle."

"My biggest dirty secret is that I'm a poet laureate who doesn’t want to be a poet," Thomas says. "I want to be a change-maker, and I just happen to use poetry to do that."

Thomas, the daughter of a white mother and Mi'kmaq father, says her work is informed by "Etuaptmumk" or "two-eyed seeing," an approach that aims to merge the best of western and indigenous perspectives.

In her graduate thesis, Thomas writes that she is registered with the Lennox Island band on Prince Edward Island, but she doesn’t know anyone who lives there. She recalls being teased as the "little white girl" while visiting reserves with her father, and feeling embarrassed when he called her by her native name, Swift Fox.

"My dad went to residential school, and I always felt something had been taken away from me," Thomas says. "I don't speak my language, and growing up outside the community, I was trying to find that place I belong.”

She grew up in a suburb of Moncton, N.B., and moved to Halifax 13 years ago to study at Dalhousie University, where she earned two degrees in social anthropology.

Thomas stumbled onto poetry about four years ago at the encouragement of a colleague from Nova Scotia Community College, where she works as a co-ordinator of aboriginal student services. Thomas's bold voice and sharp wit soon caught the attention of Halifax's then-poet laureate, El Jones, who helped recommend Thomas as her successor.

"Rebecca's voice fit in that (poet laureate) tradition in terms of someone who would get up and speak about what they knew to be true ... without worrying what the response would be," says Jones.

In one poem, Thomas envisions North America's colonial forefathers as a series of abusive ex-boyfriends, casting Christopher Columbus as a prideful "jerk" who was bad with directions and even worse with names, mocking both his insistence on calling the land's occupants "Indians" and his underwhelming sexual prowess.

"This role (of poet laureate), at least in my opinion, is an opportunity in which to engage politics in a way that's a little more confrontational," says Thomas. "I want to be the bee in the bonnet, the squeaky wheel."

Thomas was named poet laureate not long before Halifax council last May narrowly rejected a motion to review public sites honouring Cornwallis, the Nova Scotia governor who founded Halifax in 1749 and soon after issued a bounty on Mi’kmaq scalps in response to an attack on colonists.

Last Tuesday, Thomas addressed her poem to the city councillors who voted down the motion, several of whom had cited fears about re-opening old wounds and denigrating Halifax's history.

She assured councillors she was just as sweaty and uncomfortable as they were, but they would get through the poem together.

"I'm asking for your help to heal generations of spiritual welts, because we were seen as animals only valued for our pelts," she told council. "Today, we are members of your community. Show us your humility. Take my extended branch in unity, and stop honouring a man who prided himself on his limitless brutality.

"How can granting us our humanity be any less of a priority than making the donair the official meal of Halifax city?"

Thomas says she modulated her delivery to make her message seem more palatable to a council that has prioritized angry phone calls from white citizens over Mi'kmaq objections to commemorations of Cornwallis.

Coun. Matt Whitman, whose comments defending Cornwallis as "not perfect" inspired the poem's title, says he welcomes the debate, but is uncertain if it will lead to a different outcome. He says the goal shouldn't be to erase history, but to enrich it by also honouring Mi'kmaq figures.

"I think anyone who heard that poem and didn't take the opportunity to reflect missed the point," says Whitman. "If she makes you feel a little bit uncomfortable, she's doing her job."

Shawn Cleary, a rookie councillor who was elected last fall, says he has long hoped council could revisit the issue of Cornwallis commemorations, but Thomas's poem inspired him to immediately give notice that he would ask council to consider it again.

"Her words were very powerful. She essentially pleaded for council to reconsider," says Cleary. "I just felt as a new councillor, and frankly, as a human being, I would be remiss if I didn't make that (notice) of motion."

He is seeking a staff report with a recommended public engagement process to discuss “how we commemorate our past and recognize Cornwallis on municipal assets.”

Cleary has noted it was a very close vote — 8-7 — and three of the councillors who voted no have since left council. He says Halifax is ready for this discussion.

Thomas has no seat at the council table, but hopes she can represent her community as a Mi'kmaq voice in the room.

"I said specifically that I was Mi'kmaq coming into this role, and I'll be Mi’kmaq leaving this role," says Thomas. "It's important for me to go back to my community and feel like I did everything I could to enact change for the better."

Author Joseph Boyden apologizes for being 'too vocal' on indigenous issues