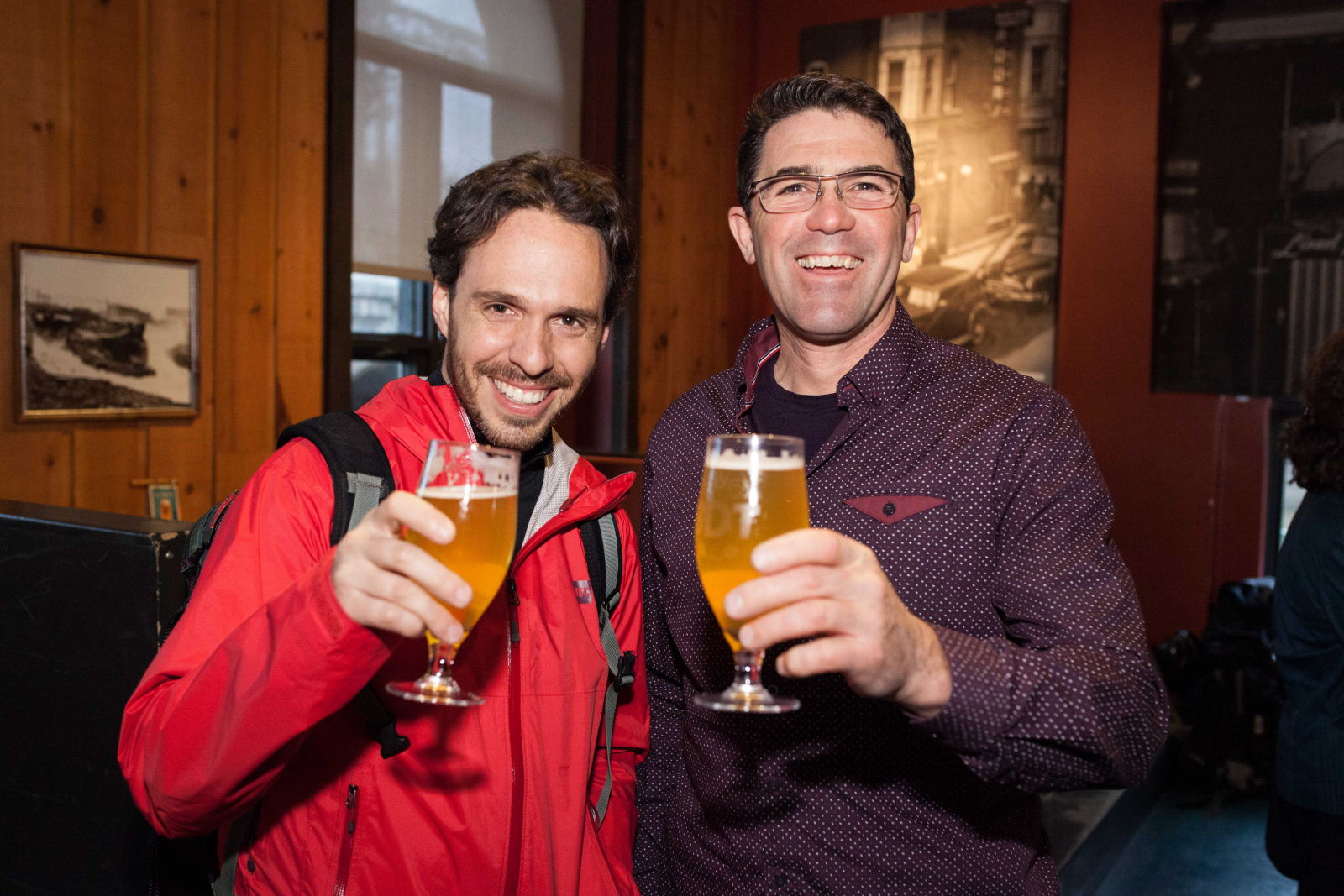 Vincent Loiselle (left) from the local organization CREDDO and Marc Godin, vice-president at Les Brasseurs du Temps, toast the campaign and the beer, which will be served at the microbrewery until supplies run out. Photo by Alex Tétreault
Previous story

A number of politicians from Canada's capital region sipped a new beer on tap on Wednesday as they lent a hand to a hoppy campaign against a major pipeline project.

The event at a Gatineau microbrewery and restaurant, Les Brasseurs du Temps, across the river from Ottawa, was the final stop of an organized tour against TransCanada Corp's Energy East pipeline. The campaign warns that the oily project would ruin fun for Quebeccers.

Local leaders in attendance, including Chelsea Mayor Caryl Green, and Gatineau city councillors Mike Duggan and Denise Laferrière, agree: They believe the risks of the project are too high.

If built, the Energy East pipeline would transport up to 1.1 million barrels of crude oil per day between Alberta and New Brunswick. It would also cross some 3,000 rivers and streams along the way, and the Calgary-based company behind the project has not yet explained how it would safely cross major waterways like the Ottawa and Saint-Lawrence Rivers. Canada's energy regulator, the National Energy Board, is now reviewing the project.

More than 25 Quebec craft brewers have joined the campaign, which was launched in early March by Coule Pas Chez Nous (loosely translated as don't spill at my home), an organized anti-pipeline group. The new beer sampled by politicians, a light and hoppy IPA, will be on tap at Les Brasseurs du Temps and available elsewhere in Quebec until the supply runs out. Some of the proceeds of sales — $1 for every beer — will be going back to Coule Pas Chez Nous.

The anti-pipeline campaign's supporters say that Energy East would threaten up to 3,800 jobs in Quebec's beer industry if there were an oil spill by contaminating water supplies used for brewing the beer. They also argue that the pipeline itself would only create 33 permanent jobs in Quebec if it's completed.

The pipeline's supporters have argued that the project would boost Alberta's slumping oil industry and allow it to expand.

Roughly 100 people attended Wednesday's festivities, said Coule Pas Chez Nous organizer Réal Lalande. It was eclectic mix of concerned citizens, environmental groups and local politicians, many of whom made speeches during the event.

Five microbreweries in British Columbia have already borrowed from the movement in Quebec to help support opposition to the Kinder Morgan Trans Mountain expansion project. Earlier this month, they donated beer for a weekend charity event in Vancouver that brought in $17,000 to fund lawsuits against the proposed expansion of the 1,150-kilometre Trans Mountain pipeline between Alberta and the Vancouver region.

The campaign in Quebec will officially end at the end of April, but the beer will remain available at distribution points, such as Les Brasseurs du Temps' taps in Gatineau until stocks are sold out.

Here are more images from the evening: