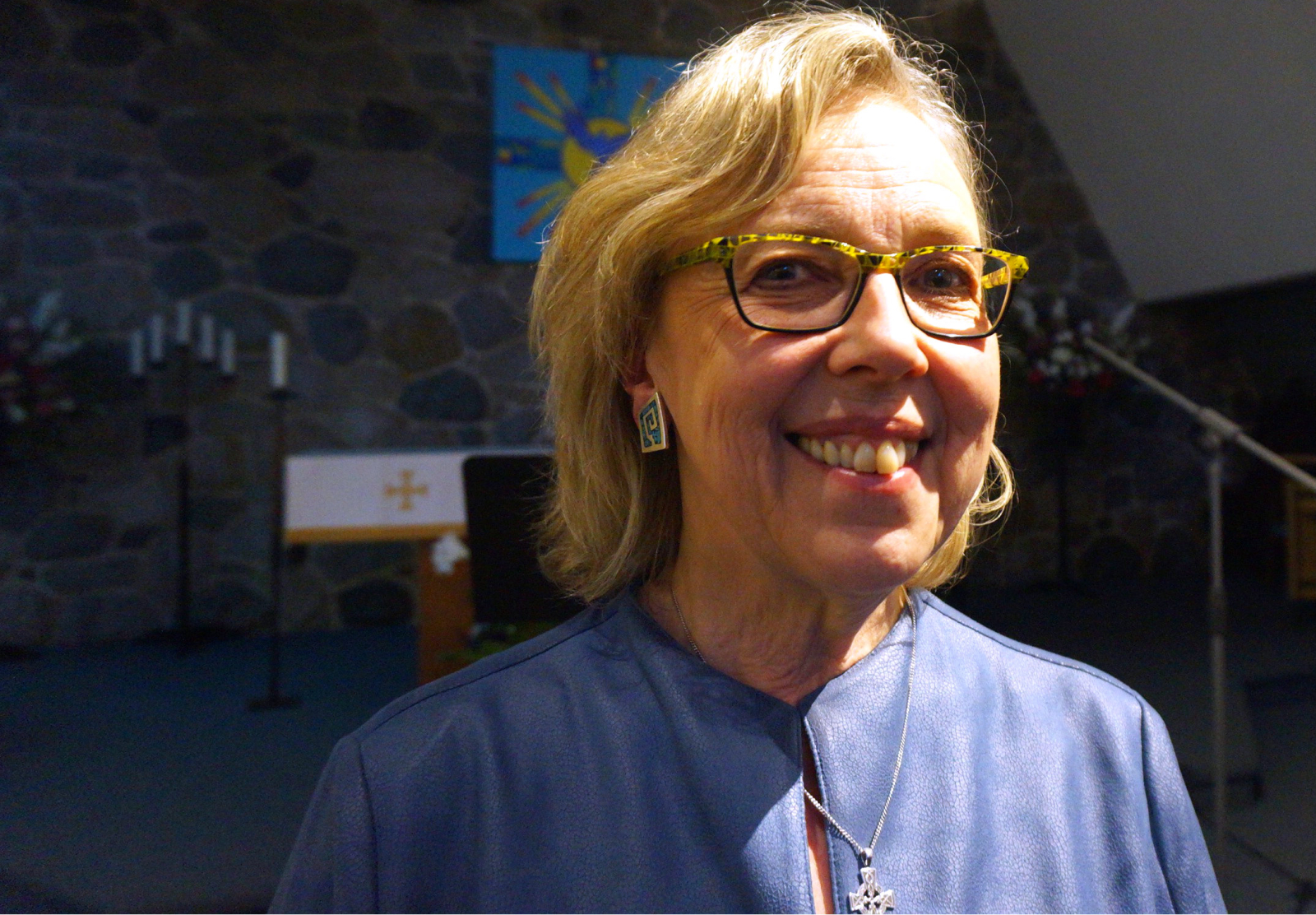 Elizabeth May speaking at St. Anselm's Church in Vancouver on Sunday, April 23. Photo by Jenny Uechi
Previous story
Next story

Federal Green Party leader Elizabeth May is blunt about the influence of large political donations from the energy industry in politics, and on the BC Liberal government's pipeline project approval process.

"They're tainted," May said of the BC Liberals, who took hundreds of thousands of dollars from Kinder Morgan, the Canadian Energy Pipeline Association, and a number of companies that signed transportation service agreements with Kinder Morgan since 2011, according to campaign finance records. The donations were made while the province was reviewing the Kinder Morgan Trans Mountain pipeline expansion proposal.

Speaking to National Observer at an event called "Pipelines and Tankers: Exposing the Consequences" in Vancouver on Sunday, May said politics and money are a "toxic cocktail."

"There's going to be conflict of interest when you see deep pockets and money flowing into coffers from the very industries that are going to be benefiting."

May said the BC Green Party, led by Andrew Weaver, hasn't accepted corporate donations from oil companies. While the BC New Democratic Party has accepted some to a lesser degree, the party opposes the pipeline expansion.

"You could say, clearly the BC Liberals under (Premier) Christy Clark have not been contaminated by the donations they've gotten from liquified natural gas (LNG) companies or Kinder Morgan if they said 'no' to any of these companies. But they've said 'yes.'"

May spoke at length to about 100 people on a rainy Sunday evening at St. Anselm's Church about the controversial Kinder Morgan expansion project, which would triple the capacity of the existing Trans Mountain pipeline to carry 890,000 barrels of diluted bitumen from Alberta's oil sands to a terminal in Burnaby, B.C..

Proponents of the project say the pipeline expansion will bring millions of dollars in tax revenue and create thousands of jobs in Alberta and B.C., while critics argue that the project only generates a small number of permanent jobs and that a seven-fold increase in tanker traffic to Burrard Inlet would put other major industries like tourism at risk.

Citizen advocacy groups recently launched a court action alleging that large donations from Kinder Morgan, the Canadian Association of Petroleum Producers and other corporate interests have unfairly biased the province's review of the Trans Mountain expansion.

May urged attendees to vote in the May 9 provincial election, saying she supported the BC Green Party's stance against the Kinder Morgan pipeline and adding that the BC NDP also rejects the proposal. Recent polls show the provincial NDP and Liberals nearly tied, while the BC Green Party has been surging to more than 20 per cent support.

A pipeline trade-off for carbon tax

After the screening of a short film by the Raincoast Conservation Foundation outlining the probable extinction of southern resident orcas in the event of Kinder Morgan's expansion, May spoke about her experience as an intervenor for the Trans Mountain pipeline in January 2016, and how the democratic process appears to have been subverted by the previous Conservative government. She questioned why people weren't allowed to sit in on intervenors' presentations during a public hearing by the National Energy Board to review the Trans Mountain expansion.

May emphasized she wasn't opposed to all oil pipeline projects, and asked why Canada insisted on exporting raw bitumen to other countries while importing oil from countries like Saudi Arabia, Nigeria and Kazakhstan. May said the Trans Mountain pipeline expansion would be more palatable to the general public if instead of diluted bitumen, it carried synthetic crude. She said while she is opposed to the pipeline expansion, Canada would benefit from more jobs and other economic if it chose to refine the bitumen in Alberta before bringing it to export, and asked why the number of oil refineries in Canada fell from 45 at its peak in 1975 to just 17 today. Refining facilities are expensive to build, and according to a July 2016 article by Oil Sands Magazine, new refineries are being built in countries like China but being shut down in other parts of the world like Europe.

May asserted that the Trans Mountain expansion application documents lack critical details about a spill response for diluted bitumen, while they include contingency plans for unlikely events such as the spread of avian flu by pipeline construction workers near poultry farms in the Fraser Valley.

During a Q and A, May said she was disappointed by an apparent political "trade-off" that led to the approval of certain fossil fuel projects, in order to make good on promises made by the Liberal government in the 2015 United Nations climate talks in Paris.

"They (the federal Liberals) really want to deliver the carbon pricing now. I think the political cost, due to a failure of imagination...was limited to number of options," she said. She said the only things that appeared to be on the negotiating table between Ottawa and Alberta were existing pipeline projects, such as Trans Mountain, Enbridge's Northern Gateway, and the TransCanada Keystone XL proposal.

May alleged that the federal Liberals' decision to approve the Kinder Morgan Trans Mountain pipeline was mostly a "political trade-off" to help Alberta Premier Rachel Notley, and that Ottawa gave B.C. approval of several energy projects to help soften the political blow of approving a controversial pipeline.

"Rachel (Notley) wants a pipeline but Christy (Clark) doesn't want it, she's got an election coming up. So if you're going to get Premier Clark to accept the government approving a pipeline — which is massively unpopular on Vancouver Island and in the Lower Mainland — how do you approve Kinder Morgan, without her saying that it violates Clark's five conditions? Well, you give her Petronas (Pacific Northwest LNG), Site C, and Woodfibre LNG. And that seems to be what happened."

May also said she still had faith that the federal government would live up to the commitments it made during the Paris climate negotiations, but warned that approving large fossil fuel projects as political 'trade-offs' would only make it harder for Canada to eventually transition toward clean energy.

"One of my frustrations as a federal party leader and, as a Canadian, is that we're not thinking like a country," she said. "We're allowing Kinder Morgan to pit Albertans against British Columbians, which I really don't like, because I want Alberta to succeed. I think if we went back to Peter Lougheed's plan, that would work," she said, of the late former Alberta premier's support for refining Alberta's oil within the province in order to reap more economic benefits.

May said the project may still face legal roadblocks from the City of Vancouver, the City of Burnaby and First Nations who filed a court challenge to the approval in January.

Citing the upset victory by the Alberta NDP in 2015, May urged audience members to encourage high voter turnout in the election.

Correction April 25, 2017: the number of attendees at the event has been updated.

What is needed in B.C.....and in some other provinces as well, is a provincial government courageous enough to put the long term health of their province above short term gains. Increasingly, more and more people know that those pipelines aren't highways to local prosperity......they are toxic snakes crossing local communities, streams, watersheds and essential food sheds.........to make money for shareholders, most of them foreign.

Nor are they sustainable. That global Daddy Warbucks' have seen to the closure of upgraders and refineries close to bitumen deposits....to made sure they were never built to begin with, is part of the global shift to third world, slave labour zones. It's an extractivist model that doesn't stop when the noxious tar is ripped from the earth. That's just the beginning of snakes and ladders that carry the junk to regions where it can be processed the most cheaply.
One has to wonder how that can be profitable given the pipelines, the endangered ecospheres, the tankers, the troubled oceans overburdened with noise, and bunker fuel, ballast, etc. of all that mega tanker traffic....but apparently, for someone, it is.
It won't produce permanent good jobs for Canadians.....that part is a lie. And it won't guarantee Canadian prosperity...that's another fib.
What it will do is speed the horrors of rapid global climate change. And oh yes....enrich the bank books of a few neo-liberals.......Christy Clark perhaps among them.
We have to find new roads to prosperity and sustainability...and we have to find them quickly. Please B.C. Don't give Clark another 4 years of dalliance with the likes of Kinder Morgan and Petronus.