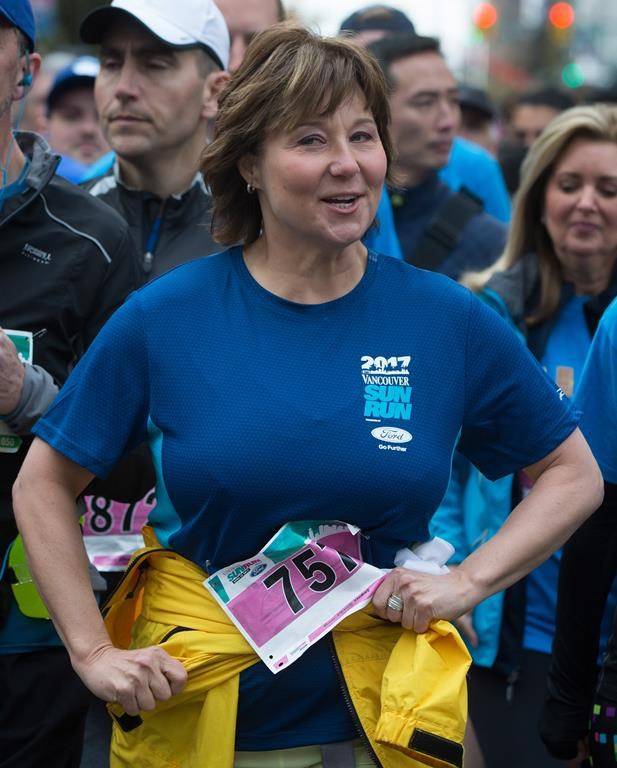 Liberal Leader Christy Clark ties her jacket around her waist as she jogs to the start line to participate in the Sun Run, in Vancouver, B.C., on Sun. April 23, 2017. Photo by The Canadian Press
Previous story
Next story

Leaders of British Columbia's main political parties are continuing to take shots at each other's election promises and past performances as the campaign nears the halfway mark.

NDP Leader John Horgan hosted a campaign rally in Vancouver on Sunday, where he told the crowd that Liberal Leader Christy Clark is working for her donors, not for the average British Columbian.

Also in Vancouver on Sunday, Clark spoke to media at the starting line of the annual Sun Run, saying she's optimistic about her party's chances come election day on May 9. But she acknowledged that the race to lead B.C. is far from over.

The Liberals are campaigning on a job creation and economic growth platform, and Clark said that will require standing up to the U.S. in order to secure a new softwood lumber deal amid U.S. President Donald Trump's protectionist rhetoric.

Clark criticized the NDP on Sunday, saying their platform "appears to be changing ever day," and gave the party's stance on scrapping medical services premiums as an example.

The New Democrats have pledged to do away with the fees, but Clark says it's unclear how they intend to make up the revenue.

"It's kind of a moving target when they're changing their policies every day," she said.

Horgan spoke with media following Sunday's rally and acknowledged Clark's remarks. The NDP platform has been "crystal clear" and Clark's party is spending most of their time "throwing mud" instead of engaging with voters, he said.

"The B.C. Liberals are desperate. They'll do anything they can to cling to power. Their time is almost up. I'm proud of our platform. It's fully costed."

The leaders will face off in a televised debate on Wednesday.