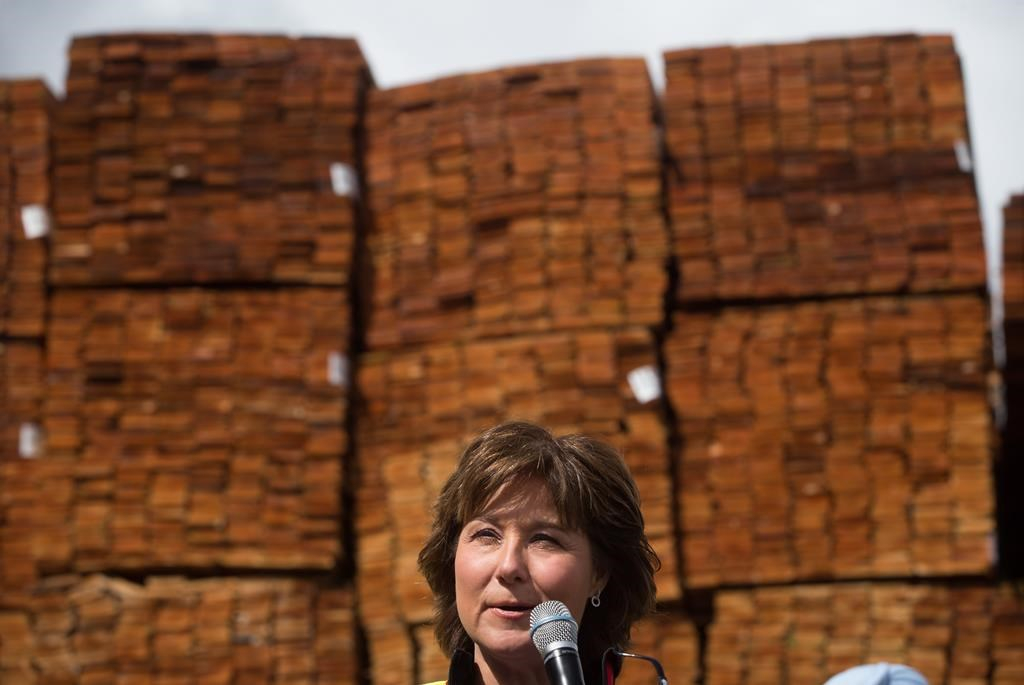 Liberal Leader Christy Clark addresses workers and local candidates while standing in front of stacks of western red cedar wood during a campaign stop at CedarLine Industries in Surrey, B.C., on April 24, 2017. Photo by The Canadian Press
Previous story
Next story

British Columbia's premier and lumber lobby are vowing to fight for forestry workers after the Trump administration announced it will impose a tariff of about 20 per cent on Canadian softwood lumber imports.

Christy Clark has released a statement saying the B.C. government will combat "unfounded" claims made by the American lumber production lobby and work to reach a fair deal with the U.S.

She says she will meet with her cabinet to discuss the developments and determine "further actions to stand up for B.C. workers" and the forest industry.

Clark says the province has already started to diversify its lumber export markets, with the U.S. accounting for 59 per cent of softwood exports in 2015, down from 82 per cent in 2001.

The B.C. Lumber Trade Council is also decrying the new duties, saying in a release that they are unwarranted and "completely without merit."

Council President Susan Yurkovich says that American demand for lumber exceeds what the U.S. industry can produce and that Canadian imports don't pose a threat to U.S. lumber producers.

She says the tariffs will only create price volatility, driving up costs for American consumers, especially families who want to build or renovate a home.

The group believes a new softwood lumber agreement is in the best interests of consumers and producers on both sides of the border, Yurkovich said.

"However, with this U.S. trade action, we will also continue to vigorously defend our industry and our workers against these unwarranted duties and expect to be successful as we have been in the past," she added.

U.S. President Donald Trump's announcement on the new duties Monday comes in the midst of a B.C. election, where the Liberals have promised to create new jobs and grow the economy.

Campaigning in Delta, B.C., on Monday, Clark said the province's forest industry has "the potential to change the world" by supplying the materials and expertise to create iconic new structures and public spaces.

Clark has repeatedly said that her party is the only one that can adequately stand up for B.C. in negotiations on a new softwood lumber agreement. In her statement Monday, Clark pledged to continue fighting for an agreement that works for B.C.

"At a time like this, British Columbians deserve a premier who will fight these unfair tariffs with everything they've got," he said.