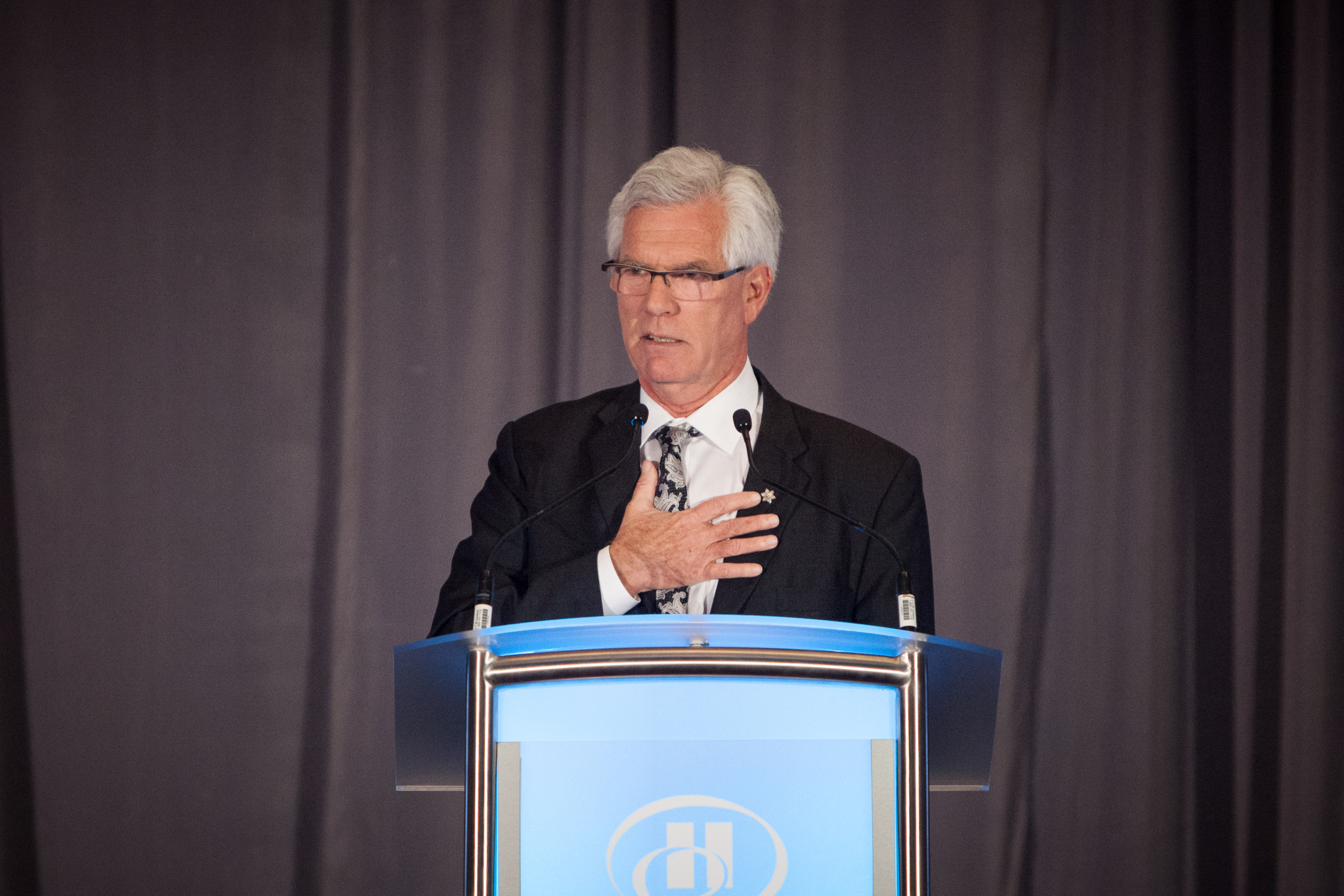 Natural Resources Minister Jim Carr at the CanWEA Spring Forum on April 5, 2017. Carr was briefed on a “U.S. engagement plan” soon after Trump was elected. Photo by Alex Tétreault
Previous story
Next story

Trump has kept the Canadian government on its toes in recent days with a daily storm of contradictory rhetoric. On Wednesday, for example, the White House signaled U.S. withdrawal from the North American Free Trade Agreement (NAFTA), then abandoned that threat just hours later.

“I was all set to terminate,” Trump said in an Oval Office interview Thursday night with the Washington Post.. “I looked forward to terminating. I was going to do it.” The Post recounted cabinet colleagues talking him out of it and described the abrupt turnabout as "the latest in a series of sudden policy shifts and outright reversals in the frenzied lead-up to his 100th day in office."

The department at the heart of the government's planning process on many key economic issues, Natural Resources Canada, said it had been working diligently for months, prior to the U.S. election, to prepare itself for the incoming administration.

After Trump won the election, emails sent mid-November and released under access to information law reveal that bureaucrats inside the federal department were uncertain how far he would go to unleash the U.S. fossil fuel industry from regulations, notably on methane regulations.

The leaders of the United States, Canada and Mexico had pledged at an Ottawa summit in June 2016, to reduce their methane emissions from the oil and gas sector – the world’s largest methane source – 40 per cent to 45 per cent by 2025. The pledge was one of many by Prime Minister Justin Trudeau, President Barack Obama and President Enrique Peña Nieto in a 'Leaders’ Statement on a North American Climate, Clean Energy, and Environment Partnership' at the summit.

"President-elect Trump has vowed to roll back regulations on the oil and gas industry in an effort to boost fossil fuels production, but how far this reversal will go is an open question,” says one briefing note on the rules surrounding climate pollution obtained by National Observer.

“The new US administration's exact position on existing and proposed methane regulations is unknown at this time,” it says.

Trump approved Keystone XL in March, while this week his commerce department slapped a 20 per cent tax on softwood lumber imports from Canada.

In multiple briefing notes on oil and environmental regulations, there appear to be more bullet points listed under “risks” than under “opportunities,” although both sections are censored for public release.

The ministerial briefing was to include a “U.S. engagement plan” for Natural Resources Minister Jim Carr and his departmental deputies, aimed at “federal decision-makers,” “influencers” in the private sector and think tanks, governors and other state leaders, according to internal government emails. The department declined to provide further details about the briefing.

The emails are written with apparent urgency: one email chain requesting a “Canada-U.S. deep dive analysis” on key issues asked bureaucrats to compile something “very quick.”

However, in a statement, Natural Resources Canada spokeswoman Tania Carreira Pereira the two governments continue to engage on multiple levels to further strengthen collaboration to promote jobs and growth.

'We've managed to confuse our friends'

Duke University professor Frederick W. Mayer, the author of the book Interpreting NAFTA, The Science and Art of Political Analysis, said Trump appears to have little interest in normal policy-making processes, or in consulting bureaucrats or experts, before jumping into issues.

“We’ve managed to confuse our friends as much as our potential foes, and in some ways the administration has stirred the pot around the globe,” said Mayer, who has also worked as a policy analyst at the U.S. Environmental Protection Agency.

That confusion has been front and centre recently. Last week, Trump said from the Oval Office that the United States shouldn’t “let Canada or anybody else take advantage and do what they did to our workers and to our farmers...included in there is lumber, timber and energy."

Transport Minister Marc Garneau told CBC News in an interview broadcast on April 22 that he had no idea what Trump was saying.

“The US-Canada relationship has surely been one of the great success stories, on balance, over a long period of time. We’re deeply interdependent,” said Mayer.

But with the latest comments on NAFTA, he said, the U.S. is almost going out of its way to be provocative.

Mayer said the ultimate question with Trump is what political forces will constrain his impulses. Trump’s latest reversal on NAFTA, for example, came after four big-name Republicans told him to back off.

“On NAFTA, or trade more generally, obviously there are people who like the direction that the president seems to be headed, but there are an awful lot of important, powerful interests in the U.S. that would stand to lose,” he said.

“He’s hearing an earful from them right now. Many of them have their allies in U.S. Congress, and they will push back at him.”

Catherine Abreu, executive director of Climate Action Network Canada, said environmental organizations she works with in the United States and around the world had to redesign their approach to discerning U.S. government policy to account for a confusing Trump administration.

“A lot of the established rules have been thrown out the window with this administration,” she said. "There’s a level of unpredictability that is, as far as I can tell, fairly unprecedented; both unpredictability and volatility.”

Even when indications of Trump policy appear, she added, it was hard to predict whether it would be followed through on. An example of this, she said, was where the Trump administration landed on the Paris climate agreements.

“We heard strongly from Trump: ‘Pull out of the Paris agreement,’" she said. "But then we hear that there are factions within the Trump administration that want to stay in."

Trump: I didn't cancel NAFTA because I like the other leaders