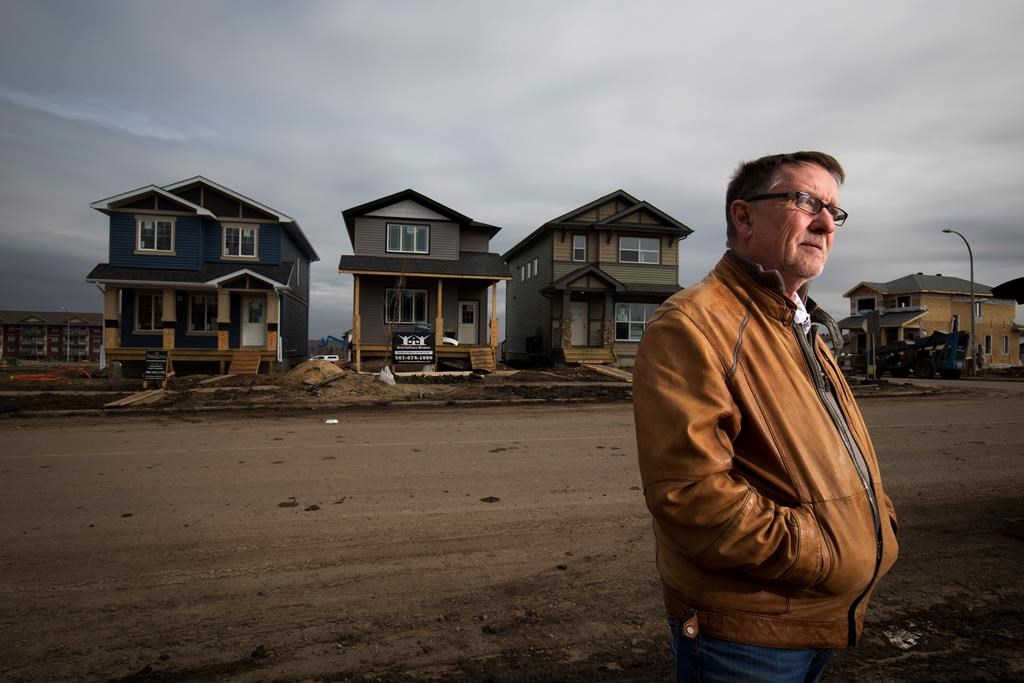 Gilles Huizinga president of the local UDI and a homebuilder with Sedgewood Homes with newly built homes in the Timberlea area that was destroyed by wildfires last year in Fort McMurray, Alta. on Apr. 20, 2017. Photo by The Canadian Press/Todd Korol
Previous story

A long-delayed building boom in Fort McMurray is ramping up as homeowners, insurers, contractors, and officials in the Alberta city clear hurdles that hindered reconstruction after the devastating wildfire last May.

While many residents and businesses had hoped to break ground last year, challenges ranged from the amount of debris that had to be removed to the volume of permits and insurance claims that needed to be processed.

Efforts to rebuild some of the more than 2,500 dwellings destroyed were also delayed as the risks and costs of winter construction meant many decided to put off the work.

"It's been a slow start, but it's really starting to motor," says local builder Gilles Huizinga, who's also president of the UDI-Wood Buffalo developer association.

Construction started on a record 96 detached houses in January, while the 92 in February were not far behind the record for the month set at the end of a 2007-08 building frenzy.

March saw a drop in detached housing starts to 34. But with semi-detached and row housing included, there's already 282 units underway this year. And the city has so far issued about 650 building permits representing some 900 housing units, a clear sign of much more construction to come.

Natural disasters generally trigger rebuilding booms, but Fort McMurray will see more activity than most as the costliest natural disaster in Canadian history. The Conference Board of Canada expects about $5.3 billion will be spent because of the fire, including $1.2 billion for rebuilding and repairing homes and another $850 million for restoring businesses.

The spending — and the 9,000 jobs the Conference Board says will be created this year — has attracted a wave of contractors and tradespeople to the city, prompting some local builders to raise questions about their reliability.

"All of the sudden you have a hundred builders showing up in Fort McMurray," said Greg Walsh, rebuild team leader at Qualico Homes. "A lot of them don't have a clue what they're doing. They've never built anything here."

Walsh also said he's concerned that some newcomers are giving insurance companies low-ball quotes, which could lead to problems.

The insurance industry, however, does extensive screening of contractors to avoid such problems, said Bill Adams, vice-president of Western and Pacific Region for the Insurance Bureau of Canada (IBC).

"All insurers have a fairly sophisticated qualification process they go through in vetting the contractors that they've put forward," said Adams.

Huizinga noted that in the wake of the disaster, many homeowners are in a state of vulnerability and urged they seek third-party advice before signing major contracts, and as head of the local UDI he's been giving advice when he can.

The builder said in most cases construction is going well, with the most common issues stemming from questions about whether things like fencing, sod, a detached garage or deck are covered by insurance and the agreement with the contractor.

One of the closest parallels to the Fort McMurray disaster was the devastating wildfire of 2011 in Slave Lake, where Mayor Tyler Warman said some homeowners in his town did run into serious problems in rebuilding.

"There was a minority that had some horrible stories where the house isn't finished, contractor's gone with the money, and no one's calling them back," said Warman.

He said some contractors were clearly a little suspect, while others took on more than they could handle and ran into cash-flow problems as the town saw a "dramatic increase" in the price per square foot to build.

IBC's Adams said the Slave Lake issue came about because unapproved contractors were over-promising to people eager to get back into their homes.

To reduce a repeat of conflicts, the provincial government has required homebuilders to provide a warranty since 2014. After the Fort McMurray fire, the province also required that builders disclose key information like whether they have any convictions or ongoing disputes.

So far, about 180 homebuilders have registered, with only about half stating that they've build a home in Alberta since early 2014 in the optional part of the form.

Sheldon Germain, a Fort McMurray councillor on the Wood Buffalo Recovery Committee, said the city's going to have co-ordinators and inspectors in every neighbourhood to make sure construction is to code.

He said they've also hosted about 50 sessions for homeowners to ask questions, as well as one-on-one meetings to help figure out issues with contractors and insurance.

The councillor said there is a need to balance safety with speed as people are eager to get on with their lives. He also noted the rebuild process is never going to be seamless.