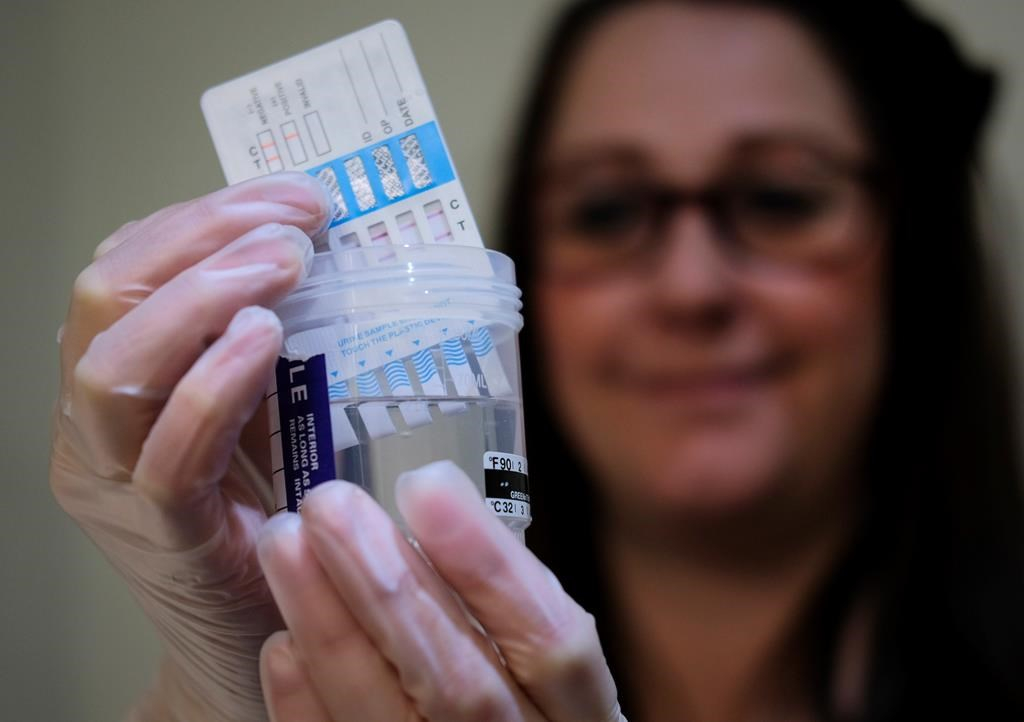 A technician tests a sample at SureHire, an Edmonton-based drug testing company with branches across Canada, in Calgary, Alta., on Wed. April 26, 2017. File photo by The Canadian Press
Previous story

The issue of drug use is closely watched in the industry, where workers tend to be young and hazards include long commutes to and from remote drilling sites, wells that produce poisonous or explosive gas and exposure to heavy machinery. Many oil and gas companies have strict bans on alcohol and drugs at work.

Precision Drilling CEO Kevin Neveu, whose Calgary-based company operates in both Canada and 2the United States, says his opposition to legalization is supported by his company's experiences in Colorado after that state legalized the drug in 2014.

He said costs there have increased for employees who need drug counselling or for those who fail drug tests and must be sent home under Precision's "zero tolerance" drug and alcohol policy.

And it's more difficult to find new recruits, typically young men, who can pass pre-employment drug tests, he said.

"We have certainly failed more people in Colorado (for drug use) after legalization than we did before," he said, adding he was unable to give specific numbers.

"There's a link, there's a cause. Even during the recruitment phase where we warn them we'll do a test, a surprising number still test positive."

Canada's Liberal government campaigned on a pledge to legalize marijuana for recreational use, arguing prohibition does not prevent young people from using the drug. It also said too many Canadians end up with criminal records for possessing small amounts and legalization would help remove the criminal element linked to the drug.

"It's going to be more costly for us to police the safety of our people," he said.

He said workers sign an agreement when hired giving permission for random tests for drugs and alcohol consumption. If someone fails a test, they must leave the job site, he said, but the company may still be responsible for paying for substance abuse treatment or covering a leave of absence.

SureHire Inc., an Edmonton-based drug testing company with branches across Canada, charges between $85 and $135 for a 12-panel point of collection test or a saliva drug test. A hair drug test costs $275 to $325, but costs rise if the sample is "non-negative" because it must then be sent to a lab for confirmation. Usually, the company pays.

"This is a really good time for companies to review their internal policies and procedures," said Jason Sheehy, Surehire's director of occupational health services.

He pointed out that medical marijuana has been available in Canada since 2001, but there still is no test to determine if someone is impaired by any drug other than alcohol — tests can only show that someone has consumed the drug at some point.

Nor can the test show when the drug was taken, he said. For example, an infrequent marijuana user's urine sample might test positive for five to 10 days after marijuana use, but a heavy user will show positive for up to 30 days.

In a recent statement, oil and gas industry training and safety organization Enform said the federal legislation fails to address the need to do further research on marijuana impairment testing technologies, nor did it cover how labour and workplace legislation can be harmonized from province to province.

"There is well-documented research to demonstrate cognitive impairments that can last for more than 24 hours and up to 20 days for chronic marijuana use," said Enform CEO Cameron MacGillivray, calling for a legal prohibition on marijuana in or near the workplace.

Matt Pascuzzo, spokesman for federal Employment Minister Patty Hajdu, said the government will ensure Canadians' health and safety are protected as it works with provinces and territories on measures addressing impairment at work.

Mark Salkeld, president of the Petroleum Services Association of Canada, said freer access to marijuana is more likely to cause problems in his industry than in many others because of its hazards.

"You know, you don't want guys stoned in those environments. Or even hungover," he said.