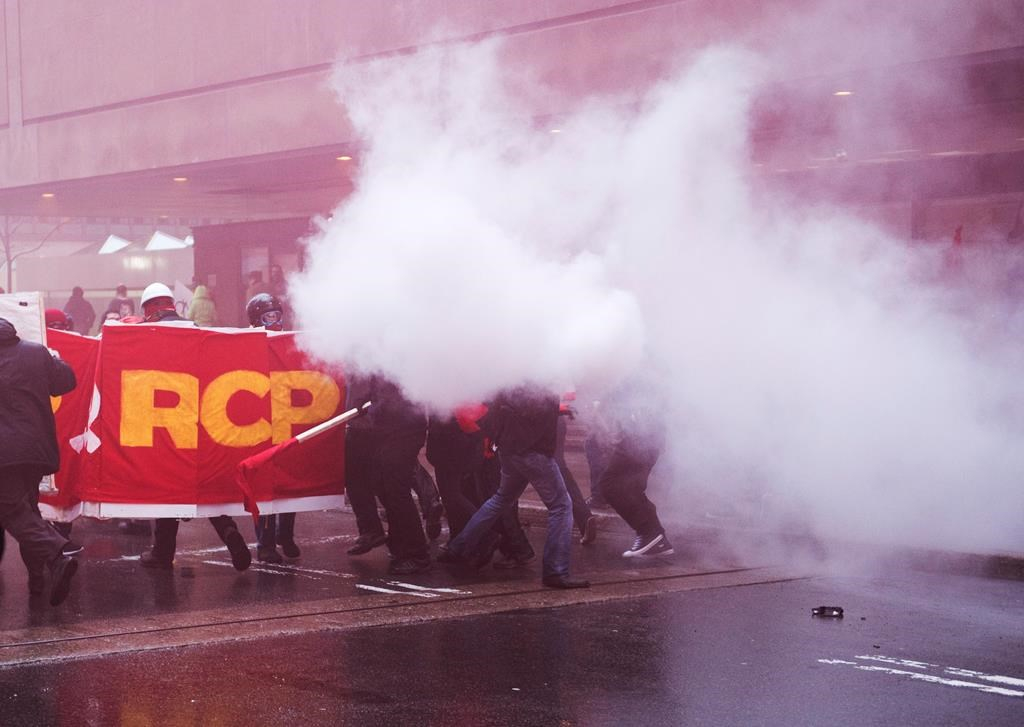 A smoke bomb goes off during a May Day demonstration Mon. May 1, 2017 in Montreal. Photo by The Canadian Press/Ryan Remiorz
Previous story

Barely 30 minutes into the anti-capitalist protest march Monday in Montreal, several in the crowd threw canisters of pink gas at police, who responded with tear gas.

Moments later, red flags, black masks and other clothing littered a downtown square, belonging to a few protesters who entered into the city's underground network to evade arrest.

Most of the anti-capitalist protesters stayed above-ground, however, and marched through downtown to disturb what they claimed were the corporate playgrounds of the scheming rich.

For the 10th consecutive year, a group calling itself the "anticapitalist convergence" organized a march in the city to celebrate International Workers' Day, also known as May Day.

Similar protests took place around the world. The slogan of this year's protest was, "They are rich because we are poor and we are right to revolt," according to the group's literature.

Aside from the initial tear gas incident, some protesters broke bank office windows and threw projectiles at cars along the march route, which was limited to the central core of the city.

By 9 p.m. police said they had made one arrest.

Protesters shouted obscenities at police, whom they accused of being the protectors of the wealthy owners of capital. Many protesters wore masks to hide their identity and most who were approached by The Canadian Press refused to be interviewed.

Constance Markievicz, a self-described communist, was in the crowd and said communism is "real democracy for the working class."

Cuba, a communist one-party republic, "is the most democratic country in the world today," Markievicz said. "I would much rather live in Cuba than Canada at the moment as a working-class person."

Alongside Markievicz was Oliver Smith-Jones, also a communist.

"I think Canada should look a lot more like the societies it tried to bury and destroy during colonization," he said, referring to the continent's indigenous peoples.

Protesters chose downtown because it's where "the rich mingle and scheme," according to a news release published Monday by the anticapitalist convergence group. The neighbourhood's bank offices, luxury hotels, restaurants and private nightclubs are places "where this 'elite' of vultures decide how we should live our lives, while maintaining us in misery and precarity."

Capitalism is the cause of ecosystem destruction around the world, growing wealth inequality as well as "community and ethnic marginalization," the group said.

Another peaceful protest of roughly 200 people was organized in the city by a coalition of unions demanding the minimum wage be increased to $15 from $11.25.

Last year's protest ended in 10 arrests and one minor injury after protesters — many of whom were wearing ski masks and other face-covering gear — allegedly threw projectiles at police.