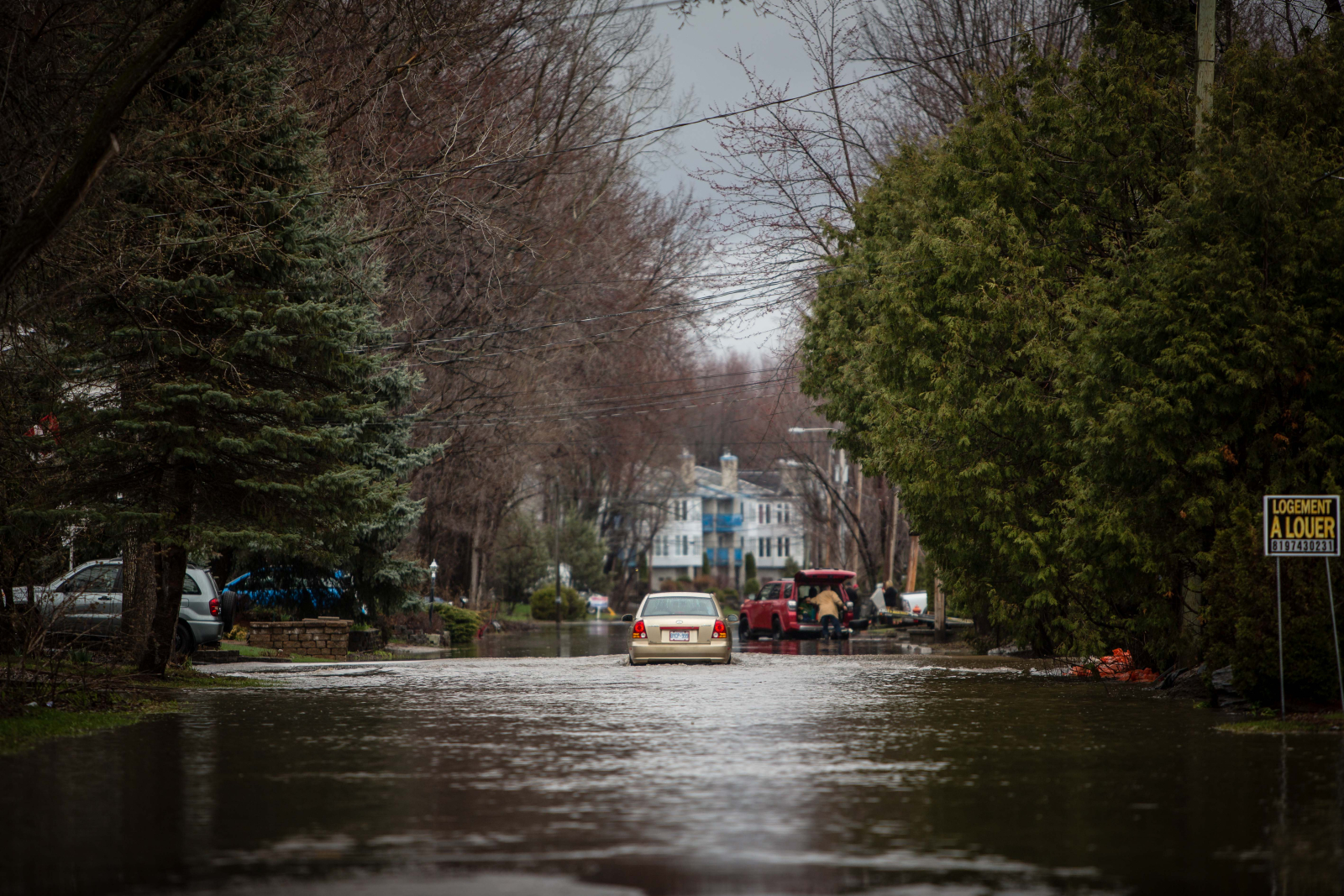 A section of Boulevard Hurtubise in Gatineau, Quebec, is submerged, April 21, 2017. This compact car's driver took a chance and made it through. Photo by Alex Tétreault
Previous story

People who live along the coast of Lake Ontario and the St. Lawrence River system should prepare for “major coastal flooding,” as high water levels not seen since 1993 are unlikely to recede anytime soon, warns a joint Canada-U.S. board.

Flooding around the Ottawa, Montreal and Trois-Rivieres, Q.C. areas, and along the Ottawa and St. Lawrence rivers, has forced residents from their homes in recent weeks.

The damaging flooding is coming on the heels of “extreme” weather that led to one of the wettest months in over a century, says the International Lake Ontario—St. Lawrence River Board.

“Coastal jurisdictions should prepare for the possibility of major coastal flooding as storms frequently occur at this time of year,” read a statement from the board on Tuesday.

Scientists say that extreme weather events such as flooding are likely to become more frequent in some regions due to climate change. They also say it's very likely that these changing climate conditions are being caused by human activity but could be mitigated by reducing global consumption of fossil fuels, deforestation and land-use changes.

A video released by the city of Gatineau, Q.C., shows the activities that city services are doing to cope with the flood. City of Gatineau Video

Last month, Lake Ontario’s water level rose to the highest it has been at this time of year since 1993. The same record was hit by Lac St. Louis, a lake which sits just south of Montreal where the Ottawa River meets the St. Lawrence, the board said.

April was one of the top three wettest Aprils on record since 1900, in terms of water flowing into Lake Ontario, according to the board, which is part of the Canada-U.S. International Joint Commission set up to monitor shared waterways.

Both rain and runoff combined forces with increased water flowing into Lake Ontario from Lake Erie to produce the effect, the board said. Some areas received more than twice their normal April amounts of rain.

Rainfall was well above average across the entire Lake Ontario-St. Lawrence basin. This has led to “rapidly rising water levels” throughout the entire system.

Lake Ontario in particular rose 44 cm, or the third-largest increase in April since 1918, the board said. On May 1, it was 55 cm above its long-term average level.

Gail R. Faveri, Arun Heer and Nick Heisler, three representatives of the board, could not immediately be reached before publication.

It’s the board’s job to ensure that outflows from lake Ontario conform to rules set out by the joint commission. These rules were agreed to by the United States and Canada in December 2016, replacing a plan that had been in use since 1963.

The rules come into force when the lake reaches a certain water level. The board said Lake Ontario has now reached that point, and is following rules that say that when the lake rises to 75.50 metres, it should be drained into Lac St. Louis so that lake is maintained at 22.40 metres.

The balancing act is a difficult task. “The board recognizes” that the specified Lac St. Louis level is still “above a flood level at this location,” it noted in a press release.

Seemingly anticipating complaints about the new rules screwing things up, the board stressed in its release that the high water levels were a result of “exceptionally wet conditions and high water supplies, and would have occurred under any regulation plan.”

“Lake and river levels would have been nearly identical this year under the previous regulation plan,” it added.

People have been posting photos of flooding on the board's Facebook page, where there is an active dialog about where the appropriate water levels should be.

In a post on the page, the board said the joint commission was interested in collecting this type of information.

"Thank you also for the images and videos you recently posted to this page, they certainly help illustrate the severity of the conditions you folks have been experiencing," the board wrote.

"While we aim to maintain levels at (Lac) St. Louis at certain flood thresholds, doing so also provides some level of protection to other areas downstream on the St. Lawrence River and also to outlets of local tributaries that feed into it," it continued.

The board said the "extreme weather conditions" in April have touched the entire region.

Environment Minister Catherine McKenna has said Canadian firms should be preparing for how they will cope with the effects of climate change, including more unpredictable, extreme weather events.

The International Joint Commission is only one body that monitors shared Canada-U.S. waterways.

Another outfit, the Great Lakes Restoration Initiative, a project that cleans industrial pollution in the lakes, came under scrutiny earlier this year when a Trump administration budget proposal suggested the White House wanted the program almost completely defunded.

That funding has been saved, at least for now, in the latest U.S. budget bill.

The U.S. Environmental Protection Agency has removed a climate change section from its website "to reflect EPA's priorities under the leadership of President Trump and Administrator (Scott) Pruitt."