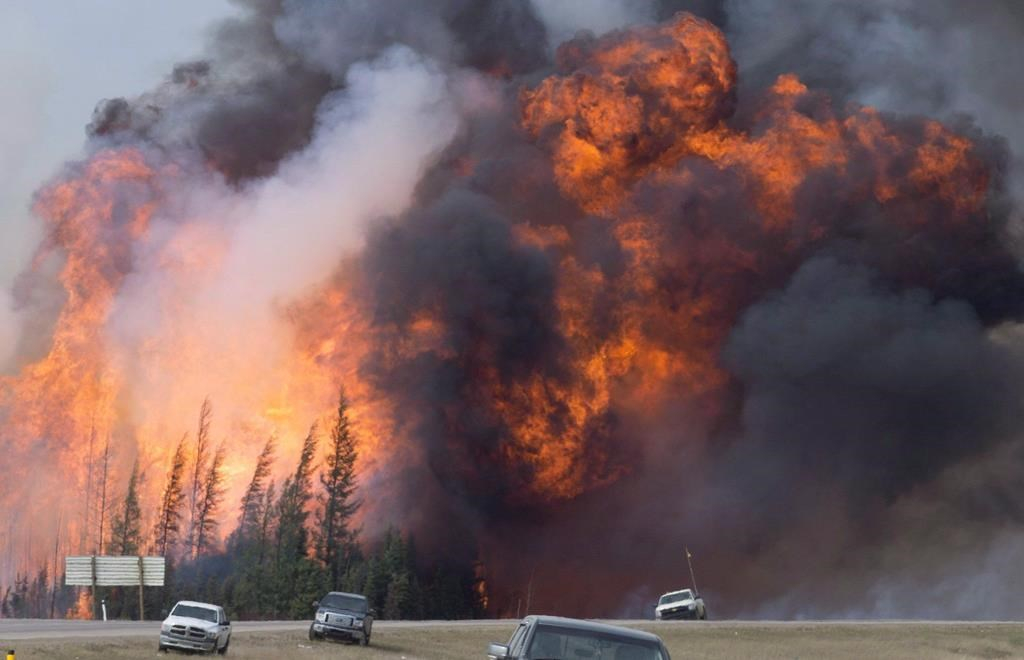 This time last year a fierce wildfire destroyed 10 per cent of the northern Alberta city of Fort McMurray. File photo by The Canadian Press
Previous story
Next story

Fort McMurray residents are gathering in a riverfront park for yoga lessons, pancakes and visits with friends as they mark a year since a fierce wildfire destroyed 10 per cent of the city.

The low-key event — that also includes dance, art, acupuncture and meditation — started at dawn on Wednesday and is to run until dusk.

The fire started deep in the bush on May 1 of last year and exploded into a ferocious blaze that forced the evacuation of the entire city two days later. It was dubbed "The Beast" because it was so fierce and unpredictable.

Jessica Hetherington and a friend from work braved the early-morning chill Wednesday to take part in an outdoor yoga class. Hetherington, 34, said she wanted to start a tough day off on a positive note.

"It did what it was supposed to do and I think we're feeling more relaxed now and ready to have this first anniversary of May 3."

Hetherington, who works in human resources, was pregnant with her first child during the fire. Her son Silas is now eight months old.

"With the wildfire and having a baby, it was a year I will absolutely never forget. And he will be told all about it —what he experienced when he was in mommy's belly."

Hetherington's home was not among those destroyed by the fire, but she said the memories are still vivid.

"It hasn't gone away. It's still almost as strong as it was when we came back in June," she said. "Everybody is still talking about it. It's affected every single one of us in very different ways. The entire year has been very surreal."

Firefighter Sam Samson, who dropped by the event with a group of friends, said it's been an emotional year.

"Every time you see something on TV with regards to the fire, it kind of brings back memories," he said.

His wife, Marlene Gould, said the most stressful aspect of the fire was worrying about Samson.

"That was a big weight on me. There were moments I thought I would never see him again," she said. "But we got through it. It's all good. We're safe. That's the main thing."

Ian Seggie, who operates heavy equipment at an oilsands mine north of Fort McMurray, said he and his family were planning to treat May 3 like any other day.

"I know within our family, it's going to be business as usual," he said recently. "A lot of people aren't talking about it ... I think a lot of people want to move on and look forward."

He said the memory is still fresh.

"You hear a helicopter buzzing overhead, or sirens, you immediately perk right up."

When the evacuation was ordered around suppertime a year ago, Seggie had a pot of soup ready to be heated on his stove. When he was able to return to his apartment in the Timberlea neighbourhood a month later, everything was as he left it — including his uneaten meal.

He was expecting a nasty smell, but instead he was greeted by a strong apple pie aroma from plug-in air fresheners.

The majority of Fort McMurray was spared, but the flames consumed about 1,600 structures. That amounted to nearly 2,600 dwelling units, which were mostly residential. The municipality says that as of April 27, 652 rebuild permits have been approved. As of early April, almost three dozen families had moved into new homes.