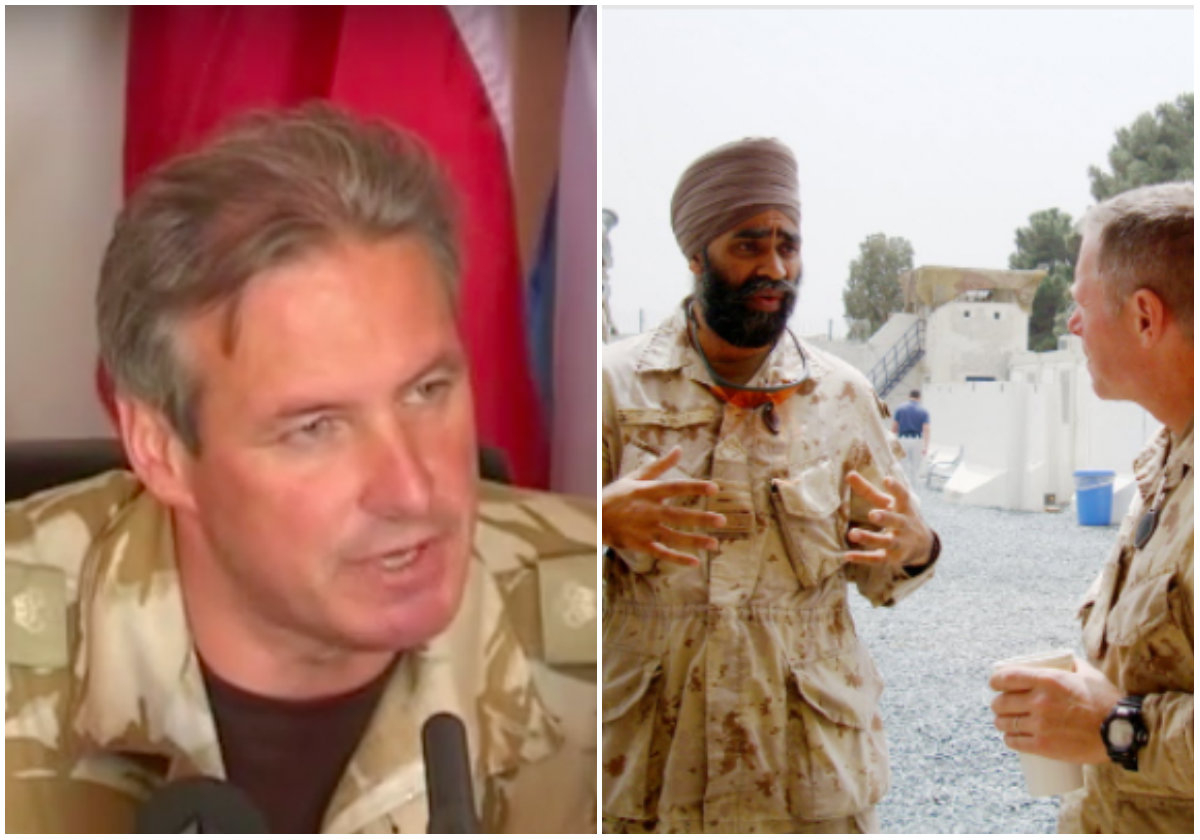 It's been pretty rich watching Her Majesty's Loyal Amnesiacs carry on over Harjit Sajjan in the House of Commons this week.

Who could forget - well, we already have, haven't we - the previous occupant of the defence portfolio, Jason Kenney?

Kenney, who never saw a day of military combat in his life, made false claims about the Canadian military that were directly contradicted by NATO itself, tweeted a misleading photograph about Muslim women, and misled the public about a FAKED CITIZENSHIP CEREMONY. That's just for starters. And just him.

The Conservatives in office were like a parrot sketch on loop, without the humour.

But there they all are, reeking with the fresh stench of converted sinners, ladelling out the sanctimony like there's no tomorrow. Draping themselves in the honour of the fallen to bray at a decorated war veteran who mis-stated his role in a military offensive, for which he's apologized.

And there's Tom Mulcair leaping and jumping at their heels.

By now everyone's heard about the CBC story by Murray Brewster, who reported that "(s)oldiers who were there in 2006 tell CBC News that Sajjan did have a key role, but at 'no time was he in on the planning of (Operation Medusa).'" (My emphasis--we'll come back to this).

Yet the claims of these anonymous sources--courageous types, these--stand in stark contrast with the contemporaneous 2006 letter of Brig-Gen David Fraser. Fraser, then commander of Canadian forces in Afghanistan, said of Sajjan's contribution:

"his analysis was so compelling that it drove a number of large scale theatre-resourced efforts, including OPERATION MEDUSA..."

But in case that's not specific enough, on Wednesday, a retired senior British army officer, Col. Chris Vernon came forward and, in a radio interview on AM640 in Toronto, directly contradicted the CBC's sources.

In doing so, Vernon, who in 2006 was Chief of Staff to the Coalition Task Force Headquarters, makes it plain that whoever the CBC's sources were, they appear to have no direct knowledge of the small "cell" of officers who mapped out the early stage plans for Operation Medusa. A cell which included Harjit Sajjan.

Have you heard Vernon's interview reported anywhere else than this one radio station? Me neither.

Do listen to the interview in full, but Vernon described Sajjan's contribution in the following way:

"(Sajjan) was a major player in the design team that put together Operation Medusa. He was able to put together an intelligence picture of the Taliban and the tribal dynamics west of Kandahar, without which we probably wouldn’t have been able to mount Operation Medusa. So that’s what he did. Pretty significant stuff.

Q: So it would be fair to say that he was integral to the operation:

A: More than integral. I know the word 'architect’s' been used and the minister has apologized for that, but he was a critical member of the planning and design team. He worked hand in glove with the Australian lieutenant colonel who was the lead planner. It was quite a small discrete group because we didn’t want it too wide in the early stages. And a critical part of it was played by Maj. Sajjan.

Q: What do you make of the Opposition Leader saying he’s committed stolen valour?

A: I’ve got no axe to grind, I’m a retired British army officer watching the Canadian press. I don’t think so. The only person who could be vaguely annoyed by that is the Australian lieutenant colonel to whom Maj Sajjan worked and actually I spoke to him yesterday and he’s not at all miffed by it.

In fact he reiterated from Australia everything that I was saying. You know, without Maj Sajjan’s input as a critical player, major player, a pivotal player I’d say, Medusa wouldn’t have happened. We wouldn’t have the intelligence and the tribal picture to put the thing together."

So, counting the Australian lieutenant colonel who wants Vernon to speak for him, there are three senior officers who were indisputably in the room planning Operation Medusa from the beginning. Fraser, Vernon, and the un-named Australian lead. Those accounts are internally consistent. The Fraser letter was written contemporaneously with the events themselves, rather than being dredged from memory some 11 years later.

All of them place Sajjan squarely in the centre of the planning of Operation Medusa, and all of them say, in effect, that his contribution was vital to its planning. "Pivotal." Admittedly, this is not being the architect of the project, but that description looks more like an exaggeration than the full-blown lie he's being accused of today.

These statements cannot both be true. If we accept the word of the CBC's anonymous sources, we have to reject the word of Col. Chris Vernon, a senior officer who was in the room.

It's worth remembering that Sajjan was decorated by the Governor-General for his service to Canada in the Afghan War. His observations on the poppy trade eradication strategy have been cited by Dr. Barnett Rubin, formerly a senior adviser on Afghanistan to the US State Department.

I think Canadians have to ask ourselves this. Are we being fair here?

Is this really how we honour the sacrifice of our combat veterans--with a cold and unforgiving judgment never applied to their predecessors?

Since when do Canadians not accept an apology, grant the benefit of the doubt to someone who's admitted his mistake, and judge a person on their job performance?

If memory serves, there used to be rules about these things, and I'm pretty sure there still are.

From Harper to Harjit, here are National Observer's ten most-read stories from 2015