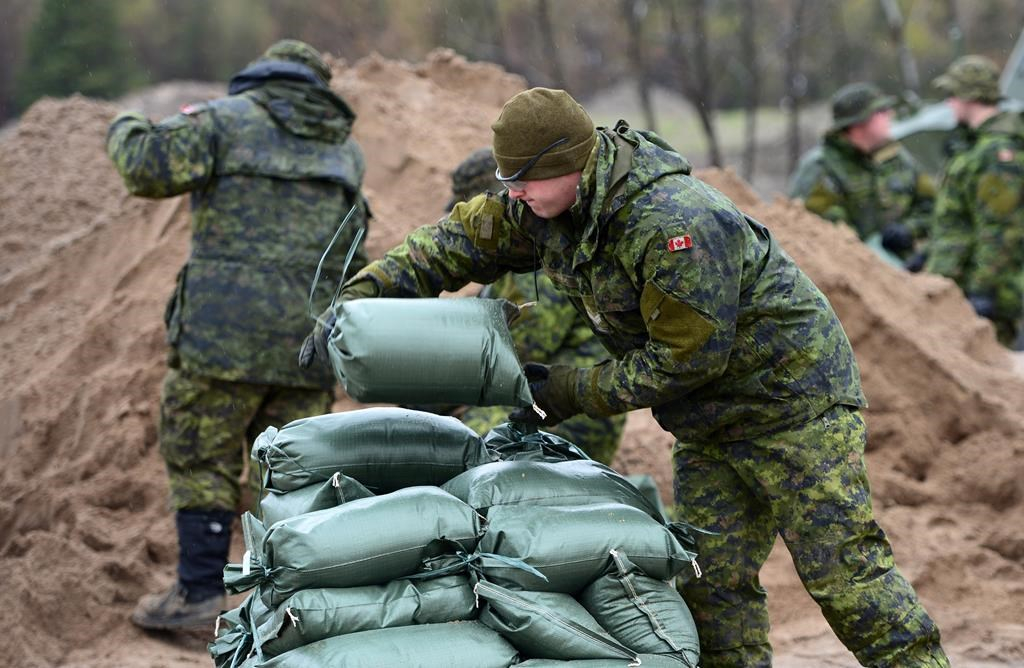 The Department of National Defence said on Sunday that 1,200 troops had been deployed in Quebec to help residents cope with the flooding emergency. Photo by The Canadian Press
Previous story

Thousands of Canadians across the country spent the weekend in a desperate struggle with rising floodwaters caused by unusually persistent rainfall.

Quebec has been hardest hit, with nearly 1,900 flooded homes in roughly 130 municipalities, from the Ontario border in the west, to the Gaspe peninsula.

National Defence said in a release that approximately 800 additional troops were deployed in Quebec on Sunday, joining more than 400 Canadian Armed Forces members already assisting with the flood effort in the province.

The troops, along with aircraft and 12 boats from the Naval Reserve, were being positioned to aid communities across Quebec, several of which are under a state of emergency, it said in a release.

On Sunday, Montreal became the latest Quebec city to declare a state of emergency after three dikes gave way in the Pierrefonds-Roxboro borough, in the north end of the city by the Rivieres des Prairies.

Canadian Forces Capt. Frederick Lavoie was overseeing 35 army reservists bagging sand and helping to save houses along the river in Pierrefonds.

His men, all from the Montreal area, took over from a regular forces unit Sunday morning and "couldn't wait to get their hands dirty and feet wet," Lavoie said.

There should be up to 100 reservists helping in the borough by Tuesday, he added.

"We are here to serve the civilian power," Lavoie said. "The main thing we can do is save houses from being flooded. And it's always good to have people on the ground to reassure the population."

Canadian Heritage Minister Mélanie Joly also posted a video from one of the flooded areas of her federal Montreal riding, making an urgent plea for help.

"We need volunteers," Joly said in the video posted on Twitter. "If you want to come and help us, please come... near the Rivières des Prairies, because we really need your help. Lots of people actually are being evacuated right now."

In #Ahuntsic #Cartierville to support our citizens facing important #QuebecFloods. Thanks to all the volunteers. #cdnpoli pic.twitter.com/qEBfcd3U2e

Montreal Mayor Denis Coderre said about 220 people in the city had been evacuated from their homes.

He said officials were prepared to remove people if they refused to comply with evacuation orders.

"I understand that morally or psychologically, physically, mentally, people are very, very tired. We're talking 24 hours in a row of people helping each other," Coderre told reporters. "But sometimes we need to protect people from themselves."

Coderre said officials are warning water levels could rise another 20 centimetres in the next 24 hours.

Donald McElligott was standing outside his home near the Rivières des Prairies in Pierrefonds, where a steady stream of water was leaking out of his garage.

A few feet away, several large, white bags of sand were acting as a dam, blocking off what used to be the entrance to the shore of the river.

"Right now I'm worried," he said. "My wife was born in this house."

West of Montreal, the small town of Rigaud issued a mandatory evacuation order Sunday and a state of emergency has been in place for several days.

Mayor Hans Gruenwald Jr. told reporters at a town hall that firefighters will be going door to door to make sure people in the affected areas leave their homes.

"We will follow the fire department and actually remove the people if need be," Gruenwald said. "Because it is either that or services will be stuck to remove those people under a state of emergency at two o'clock in the morning on a stretcher — I'm sorry but we are not going to go there."

Lt.-Col. Pascal Larose said about 400 members of the Canadian Forces were deployed between Gatineau and Rigaud, and another 550 in the Montreal area including its northern suburb of Laval.

About 75 members were deployed around Trois-Rivieres, located about halfway up the St. Lawrence River between Montreal and Quebec City, and roughly 200 members were aiding relief efforts south of Montreal.

In Gatineau, Que., near the border with Ontario, 380 residences were evacuated and officials want to evacuate another 900 homes Sunday.

Some federal employees were being advised not to go to work on Monday because of the flooding.

Officials said federal buildings in Gatineau would be closed, and employees who normally get to their offices via the interprovincial bridges in the National Capital Region were being asked not to go to their offices.

Public Safety Minister Ralph Goodale said no other province had so far requested military help, but forces personnel, including reserves, are on stand-by across the country.

The situation in Ontario seems to be "generally stabilizing," although there are many unstable local circumstances, he said.

In the eastern Ontario village of Cumberland, Christina Hajjar said she and her family likely won't be returning to live in their two homes that were destroyed by the flood.

"They are quite old," she said Sunday. "I don't think they'll be salvageable after sitting in a foot of water for goodness knows how long."

For the moment Hajjar is staying in an inn in the nearby town of Clarence-Rockland, where she said she's receiving a lot of community support.

"At this point, we just really are hoping that the faith we're putting in the government is put in the right place and they'll come through for us in the end."

Goodale said the Ontario government had requested "additional flood mitigation resources" to help in its battle against the flooding and that support would be provided.

"This Ontario request does not involve the deployment of Canadian Armed Forces personnel," he said.

Rob Kuhn, an Environment Canada meteorologist based in Toronto, said Sunday that eastern Ontario saw the most rainfall in the province. He added that upward of 80 millimetres of rain fell between Friday and Sunday morning in the Trenton area.

In Atlantic Canada, some parts of New Brunswick recorded more than 150 millimetres of rain after a nearly 36 hour non-stop downpour.

While the deluge tapered off in the province early Sunday, New Brunswick's St. John River has spilled its banks, prompting several road closures.

"It's above flood stage in several areas from Fredericton down south," said Robert Duguay, a spokesman with the province's emergency measures organization. "Water levels are going to stay high probably for the rest of the week."

In British Columbia, searchers looked for two men missing as flooding continued to plague province's Interior, and the possibility of further rain and snowmelt had residents bracing for more.

RCMP spokesman Dan Moskaluk said Cassidy Clayton, a fire chief in Cache Creek, remained unaccounted for two days after he was believed to have been swept away by a swollen waterway west of Kamloops. Clayton is presumed dead and the search had turned into a recovery effort, the Mounties said.

And a statement from the Columbia Shuswap Regional District said an urban search and rescue team from Vancouver was searching for a 76-year-old man whose home north of Salmon Arm was "completely enveloped" in a mudslide Saturday.

—With files by Nicole Thompson in Toronto, Brett Bundale in Halifax, and Geordon Omand in Vancouver and National Observer