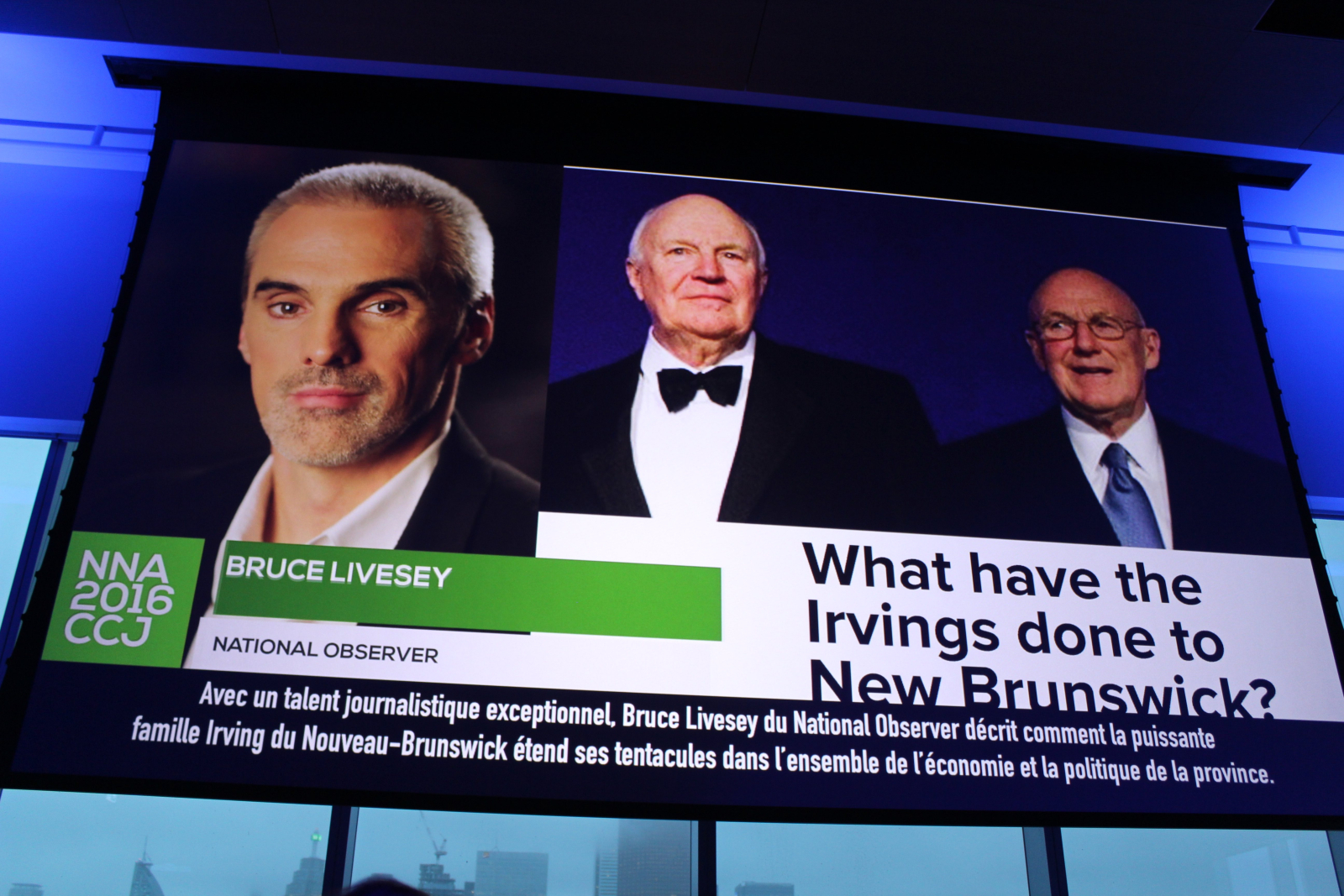 Bruce Livesey wins a National Newspaper Award on May 5, 2017 in Toronto for his series on the role of Irving family in New Brunswick. Photo by National Observer
Previous story
Next story

Last Friday, Livesey became the first journalist from an online-only publication to win a National Newspaper Award. Livesey defeated two other journalists from the Globe and Mail, Mark MacKinnon and Marina Strauss, to capture the top honours in the business category for his series on the dominance of the Irving family in New Brunswick.

"With exceptional storytelling skills, Bruce Livesey of the National Observer describes how New Brunswick's powerful Irving family has tentacles that reach deep in the province's economy and politics," said a presentation to the crowd. "His series brims with details about how the Irvings use their power and connections to passionately protect and defend their industrial and media empire."

The awards have recognized the best in Canadian journalism every year since 1949.

Livesey stunned a crowd of Canada's top journalists as he accepted the award on the Globe and Mail's home turf on the 17th floor of the newspaper's downtown Toronto building. He ended a 10-year winning streak for the Globe in the business reporting category.

"Through countless interviews and deep research, Livesey exhibits top-notch reporting as he peels back the lawyers to offer readers an insiders' view of the family's major business interests," the crowd was told. "Dodging legal obstacles thrown up by the media-shy family, and with an ability to convince reluctant sources to open a public discussion, Livesey produces a fascinating account into how the Irvings have wielded and retained influence for decades. In the process, Livesey also raises serious political and ethical questions concerning the family's relationships and dealings with governments and all levels."

Livesey said he hadn't even prepared a victory speech because he had expected one of the Globe's reporters would win.

"To be frank, I was shocked we won, only because our competition in that category was the Globe and Mail, while we are a small, digital media outlet," Livesey said after getting the award.

"The win is also an enormous credit to the bravery of our publisher (Linda Solomon Wood). Quite frankly I can't think of any other media outlet which would have allowed me so much space to fully explore the subjects of this greatly feared corporate group, and in such a critical fashion. After all, for a small media outlet, the risks are even greater. So this is a win for the Davids taking on the Goliaths in more ways than one."

Overall, the Globe and Mail captured 11 out of the 21 awards. Journalists from the Calgary Herald/Calgary Sun, The Canadian Press, the Fort McMurray Today/Edmonton Journal/Edmonton Sun, the Kingston Whig-Standard, La Presse, the Winnipeg Free Press, the Toronto Star and the Toronto Sun also won awards on Friday.

"Remarkable journalism was on display Friday night at the new Globe and Mail Centre," said National Observer editor-in-chief Linda Solomon Wood. "I was so inspired by the quality of the work that has been happening across Canada and the truly exceptional work by the team at the Globe and Mail. But above all else, I was so thrilled for Bruce. His courage, commitment and brilliant writing are one thing. The amount of time and effort he puts into his reporting and research are another impressive dimension. All in all, he is outstanding and I'm so happy to see him recognized.

"Thank you so much to the investors, Kickstarter supporters, subscribers and monthly donors who have empowered his reporting since our launch two years ago. It all comes down to you. This is your award, too."

MacKinnon, from the Globe, was named Canadian journalist of the year on Friday for his international reporting.

Editor's note: This article was updated at 10:15 a.m. on Monday with comments from Bruce Livesey and Linda Solomon Wood.

You can support Bruce Livesey's next award-winning investigation here.