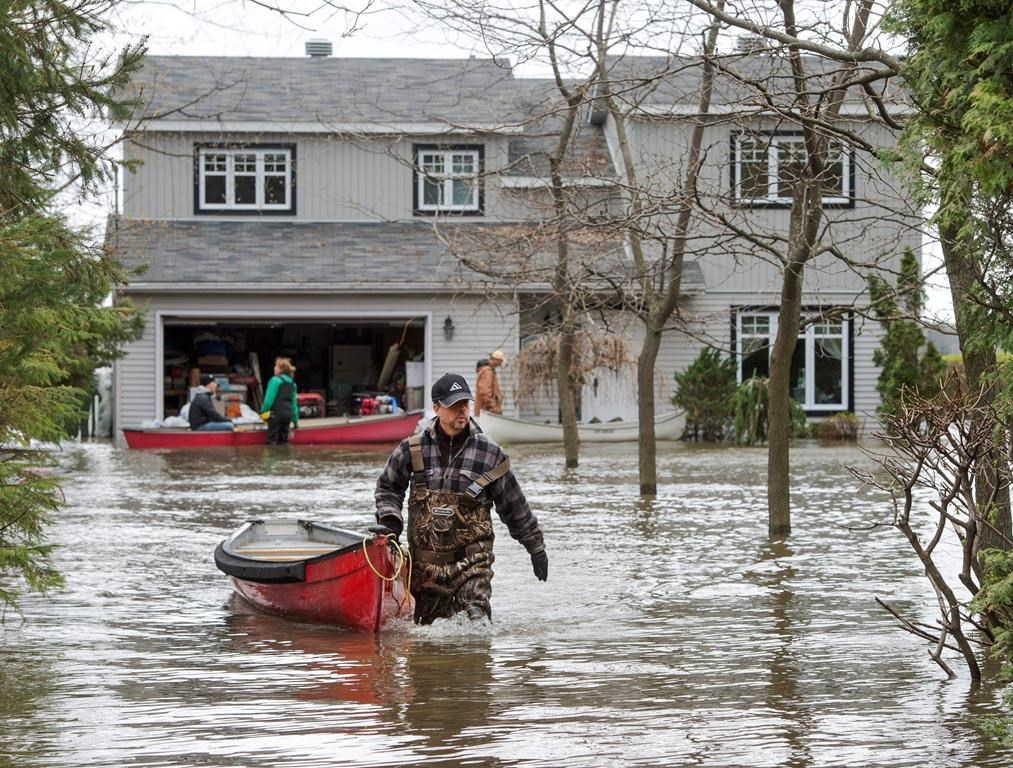 Residents use canoes to access their home Monday, May 8, 2017 in Deux-Montagnes, Quebec. Photo by The Canadian Presss/Ryan Remiorz
Previous story

A man and a two-year-old child were missing in eastern Quebec on Monday after their vehicle drifted into a river because of heavy flooding on a road.

Police said the child's mother was able to swim to shore after the car swerved into Riviere Sainte-Anne on Sunday and that her life was not considered to be in danger.

The search for the two continued as Quebec's public security minister said water levels across the province were expected to peak between Monday and Wednesday.

"What's encouraging is that the water levels will stop climbing," Coiteux told a news conference. "It's very important to reiterate that. We are reaching maximum levels.

"The water levels in the flooded areas should start going down Wednesday. It may start earlier in certain sectors. But these levels are very high... so patience is required. But I know it's hard."

Heavy rains and melting snowpack across Quebec have so far flooded 2,426 residences in the province, forcing the evacuation of 1,520 people in almost 150 municipalities.

Environment Minister David Heurtel said there were "encouraging signs" in the Outaouais region, near the Ontario border, where water levels are rising more slowly than before.

In Montreal-area Rigaud, Chris Amerides said he bought a small motorboat last week for $7,000 so he could check on his house and transport people in and out of the flood zone.

"I knew the water was coming up," he said in an interview.

He has so far transported about 24 people area so they can get a look at their homes along the Ottawa River.

"People weren't ready for this," he explained. "They didn't have boats or pick-ups. They were driving down the flooded streets with minivans. That's not going to work."

Row after row of houses have been abandoned in the community along the Ottawa River.

Some 1,650 soldiers in all were expected to be helping the the flood effort by the end of the day Monday.

The troops, along with aircraft and a dozen boats, were aiding communities across Quebec, several of which were under states of emergency, including Montreal and its northern suburbs.

"We are being ready to be responsive in any form or shape that is required to meet the task," said Brig.-Gen. Hercule Gosselin. "So I have no concern, whatsoever, that we're going to be able to answer the call from civil security.

"More than 90 per cent of all the troops are on the front lines working with firefighters, police officers and volunteers helping people."

In the western Quebec community of Gatineau, 380 residences were evacuated and some federal employees were advised not to go to work on Monday because of the flooding.

The Red Cross, meanwhile, announced it is setting up a relief fund for flood victims all over Quebec as it invited people to contribute financially.

Some parts of eastern Ontario were also hit hard by flooding, and Public Safety Minister Ralph Goodale said the federal government was responding to a request from the Ontario government for "additional flood mitigation resources."

Goodale noted the request did not include military help.

In Atlantic Canada, some parts of New Brunswick recorded more than 150 millimetres of rain after a nearly 36-hour non-stop downpour. And while the deluge tapered off early Sunday, New Brunswick's St. John River had spilled its banks, forcing several road closures.

Quebec says high water levels across province to peak by Wednesday, May 10, 2017

By The Canadian Press | News, Politics | May 8th 2017
Race Against Climate Change