Quebec says high water levels across province to peak by Wednesday, May 10, 2017 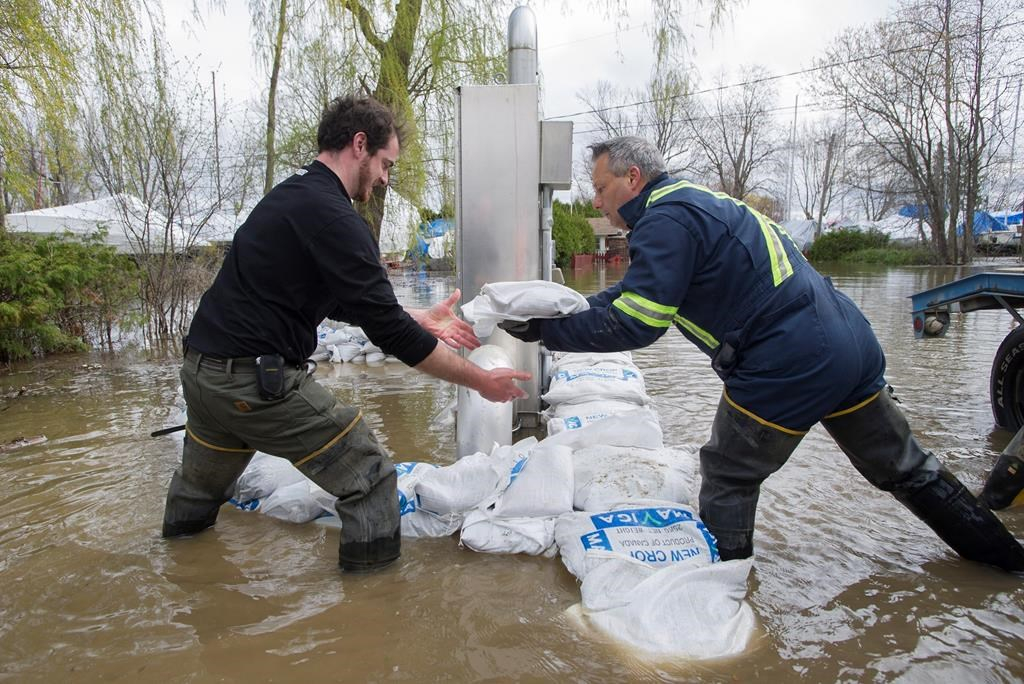 Volunteers place sandbags around an electrical panel in the town of Hudson, Que., west of Montreal, Monday, May 8, 2017, following flooding in the region. Photo by The Canadian Press/Graham Hughes
Previous story
Next story

Quebec's public security minister is saying water levels across the province are expected to peak between today and Wednesday.

Heavy rains and melting snowpack across Quebec have so far flooded 2,426 residences in the province, forcing the evacuation of 1,520 people in almost 150 municipalities.

Environment Minister David Heurtel says there are "encouraging signs" in the Outaouais region, near the Ontario border, where water levels are rising more slowly than before.

A family tragedy struck in Quebec's Gaspe peninsula Sunday night after a vehicle with three people inside, including a two-year-old child, drifted into a river and flipped over.

The child's mother was able to swim to shore but the father and the baby girl are missing.

Provincial police Sgt. Claude Doiron says authorities are looking for the two missing people but so far there are no signs of them or the car.

The troops, along with aircraft and a dozen boats, are aiding communities across Quebec, several of which are under states of emergency, including Montreal and its northern suburbs.

In the western Quebec community of Gatineau, 380 residences were evacuated and some federal employees were advised not to go to work on Monday because of the flooding.

Some parts of eastern Ontario have also been hit hard by flooding, and Public Safety Minister Ralph Goodale said the federal government was responding to a request from the Ontario government for "additional flood mitigation resources."

Goodale noted the request did not include military help.

In Atlantic Canada, some parts of New Brunswick recorded more than 150 millimetres of rain after a nearly 36-hour non-stop downpour. And while the deluge tapered off early Sunday, New Brunswick's St. John River had spilled its banks, forcing several road closures.