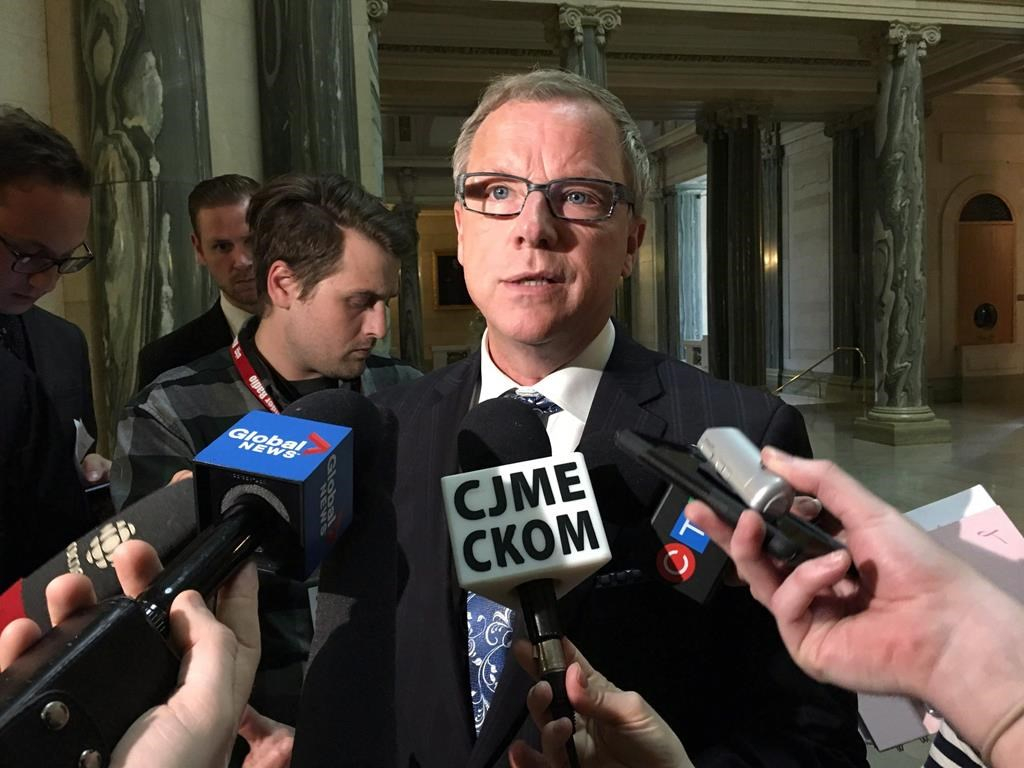 Saskatchewan Premier Brad Wall talks to reporters at the legislature in Regina, Monday, May 1, 2017. File photo by the Canadian Press/Jennifer Graham
Previous story
Next story

Saskatchewan Premier Brad Wall says any attempt by Ottawa to link transfer money with a province's carbon tax policy would be a serious attack on federal-provincial relations.

In a letter to Prime Minister Justin Trudeau, Wall says that would violate the principles of fiscal federalism and he calls the threat unacceptable.

"I'm also asking him ... to release the unredacted version of these internal memos so all the provinces know what we're dealing with here," Wall said Monday at the legislature.

"I think this is very serious. If the federal government is now saying, 'Look, if you don't support us here, you won't get any of this money,' to which all provinces are entitled to on a formula, well that's less like how to run a federation and more like how you run a crime family."

Equalization is a federal program that transfers money to poorer provinces so they can offer government services at similar levels across the country.

Wall argues Saskatchewan's resource-based economy has contributed more than $5 billion to equalization over the last decade, while receiving nothing in payments.

Saskatchewan officials are contacting the federal government to find out what's being considered, he said.

"First of all, the fact that it would be mused about even is a concern to me, that there's someone in the Department of Finance — and I have to think it wouldn't be without license from someone very senior — who's thinking about, well, should equalization payments be tied to some province's support of a specific federal Liberal policy," said Wall.

"That kind of discussion shouldn't even be happening, never mind in the senior levels at the Department of Finance."

He said he's also concerned about other transfer payments including for health, education and infrastructure funding.

"The issue of pricing carbon pollution is unrelated to the federal government's continual engagement with the provinces on the topic of equalization. Linking the two is not a conversation we are having with the provinces," she said in the email.

Wall said he's pleased to hear McKenna's assurances, but her comments don't address other types of federal payments, such as infrastructure funding.

Trudeau has said all provinces must set up a cap-and-trade system or impose a price on carbon of at least $10 per tonne starting next year, which would increase to $50 by 2022, or Ottawa will do it for them.

Eleven provinces and territories agreed to the carbon price plan in December when they signed the Pan-Canadian Framework on Clean Growth and Climate Change. Saskatchewan and Manitoba did not.

McKenna told The Canadian Press last week that negotiations with the two provinces have continued.

Wall said Saskatchewan will continue to oppose any attempt by the federal government to impose a carbon tax on Saskatchewan.

"Meet us in court," said Wall. "My point to the federal government is, if they think they have the constitutional authority to impose a carbon tax on one or a couple of provinces, then go ahead, bring it forward and we will take this to court.

"We're reasonably optimistic about our chances and if they are too, that should be their final vindication."