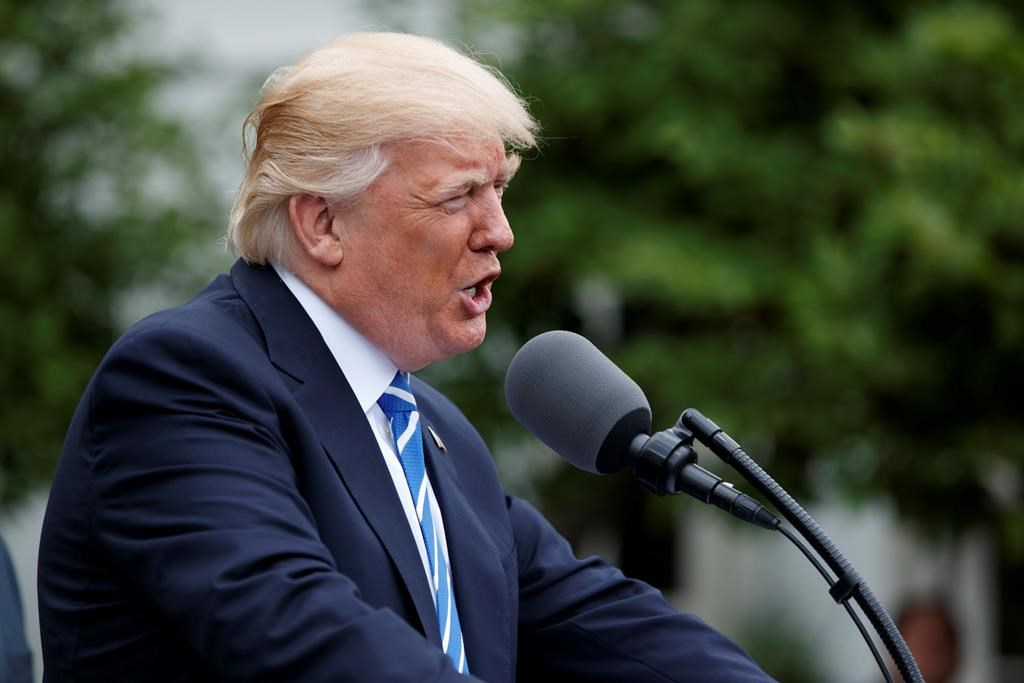 A few holes have already been blown into the story of why Donald Trump fired the director of the FBI — with some self-inflicted blasts coming from the president himself.

Doubt was cast Thursday on about five elements of the story.

The White House had stated the following: the FBI's Russia investigation was no big deal, the investigation was unrelated to James Comey's ouster, the ouster came at the behest of a senior Justice Department official, it helped boost morale at the FBI, and before being canned the director promised Trump he wasn't being investigated.

One by one, the story's pillars wobbled.

—One: The White House tossed aside the main rationale from the previous day — that the firing happened because some official recommended it in the Justice Department. It's the explanation offered by Vice-President Mike Pence, as well as the initial one from several White House spokespeople.

Turns out, it was Trump's idea. He'd been planning it for a while, he asked for the recommendation, and why do the details of this matter, a White House spokeswoman shrugged 24 hours later.

"Like, why are we arguing about the semantics?" Sarah Sanders told Thursday's daily briefing.

In an interview with NBC, Trump said he'd been planning to sack Comey no matter what the recommendation said: "I was going to fire regardless ... (Comey)'s a showboat, he's a grandstander, the FBI has been in turmoil."

Trump said he had dinner with the director.

—Two: At that dinner, he asked Comey whether he was under FBI investigation. He said Comey assured him that he was not, personally, under investigation. Multiple news reports have cited sources close to Comey saying he would never have made such a guarantee.

The new acting director of the FBI did not make that guarantee when asked at a Senate hearing.

He appeared before the same committee conducting a Russia probe. Members of the committee have begun asking questions about Trump's business ties. For instance, they've requested documents from the same anti-foreign money laundering unit, within the Treasury Department, that fined Trump Taj Mahal casino $10 million in 2015 for long-standing violations.

Comey could be asked about this if he appears before lawmakers, who want to question him. Some are also raising questions about the propriety of Trump pressing the police for information about himself.

—Three: The White House insisted the firing has no bearing on the FBI's Russia investigation.

Unless, maybe, it does.

"And we think that we've actually, by removing director Comey, taken steps to make that happen."

The investigation will proceed as planned, according to the FBI director. Andrew McCabe said the firing will have no effect, testifying before a Senate committee: "Quite simply put, sir, you cannot stop the men and women of the FBI from doing the right thing, protecting the American people, and upholding the Constitution."

—Four: The previous day, the White House called the Russia probe a minor matter — Sanders called it one of the smallest things on the FBI's plate. Not so, says its acting director.

"I would not (say that)," McCabe told the Senate hearing. "We consider it to be a highly significant investigation."

—Five: The White House suggested morale was low at the FBI, requiring a personnel change.

But the new interim boss, McCabe, testified Thursday: "I can tell you that I hold Director Comey in the absolute highest regard. I have the highest respect for his considerable abilities and his integrity and it has been the greatest privilege and honour in my professional life to work with him. I can tell you also that director Comey enjoyed broad support within the FBI and still does until this day."

He did concede there were internal disputes about how the Hillary Clinton email investigation was handled.

And some involve him.

An investigation by the Department of Justice's inspector general was launched in January into whether McCabe should have been involved in the email case. That's because his wife Jill McCabe ran for the Virginia state senate in 2015, and reportedly received a large contribution — $500,000 — from a group with ties to the Clinton-friendly governor.

Democrats focused on the president, the FBI, and Russia.

They have threatened to delay proceedings in the Senate unless they get a few demands met. One is a special prosecutor to examine Trump's Russia ties. Another is a briefing from the Justice Department official who wrote the memo recommending the firing.

They have been promised a briefing next week.

"Tuesday night's (firing) was a shocking development. The timing of director Comey's dismissal, to me and to many members on this committee, on both sides of the aisle, is especially troubling," said Sen. Mark Warner, of the intelligence committee.

"It's hard to avoid the conclusion that the president's decision to remove director Comey was related to this investigation and that is truly unacceptable."