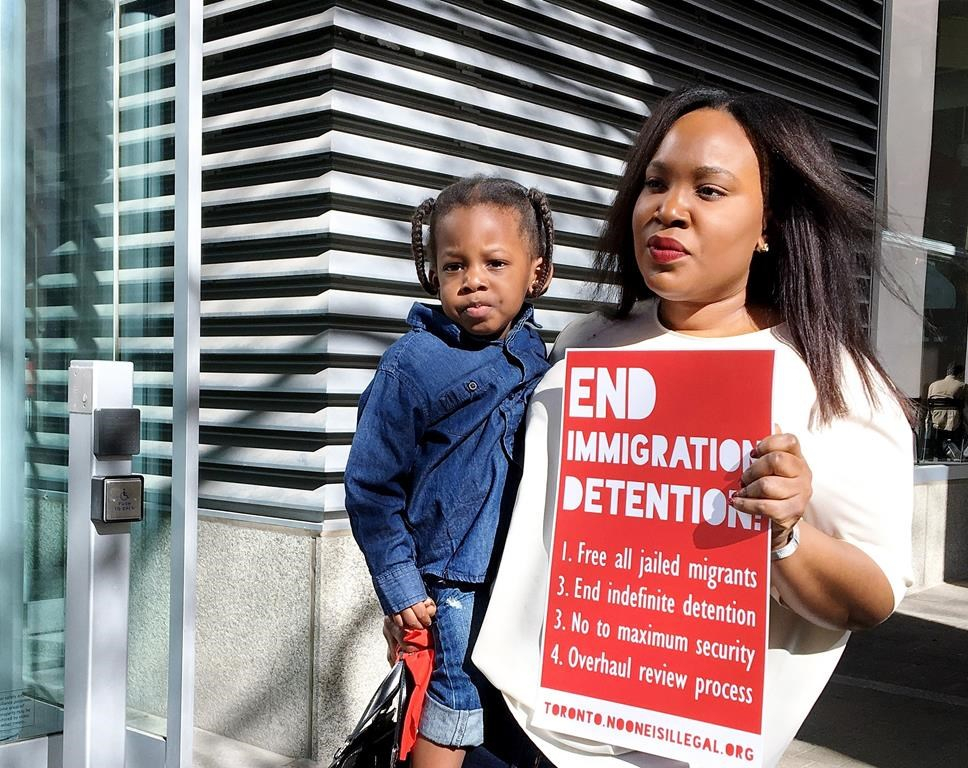 Kimora Adetunji, 33, is seen with her two-year-old son King, outside Federal Court in Toronto on Monday, May 15, 2017, where indefinite immigration detention was subject of a court hearing. Photo by The Canadian Press
Previous story
Next story

Canada's immigration regime allows for indefinite and arbitrary detention that can cause severe psychological distress and is therefore unconstitutional, Federal Court heard Monday.

What's needed is a robust process and legal limit on how long foreigners can be held when speedy deportation is unlikely, court was told by lawyers for a Jamaican man who spent five years in custody.

"This is a case of the Canadian state depriving human beings of their most fundamental rights," lawyer Jared Will said in his submissions. "Lengthy indefinite detention is contrary to the principles of fundamental justice."

At issue are provisions in Canada's immigration law that allow foreigners facing deportation to be detained — frequently under maximum security conditions — when the government considers them a flight risk, dangerous, or cannot confirm their identity.

The case was launched by Alvin Brown, a mentally ill father of six, who was deported to Jamaica last September. He had spent five years in detention as a danger to the public based on prior criminal convictions, mostly drug and weapons offences. Canada could not deport him until Jamaica issued a travel document.

While detention reviews must by law take place every 30 days, Brown's lawyers told Judge Simon Fothergill that the process is stacked against detainees and all too frequently amounts to a rubber stamp.

The result is that hundreds of people, who cannot readily be deported for various reasons, find themselves behind bars for months or years — an unjustifiable violation of constitutional guarantees and Canada's international obligations, the lawyers said.

Will argued detentions should be capped at six months, unless the government can prove compelling reasons to hold a person for longer. The European Union, for example, allows a maximum of 18 months, court heard.

Brown's co-counsel, Jean-Marie Vecina, rhymed off several problems that render detention reviews largely meaningless. For example, she said, a finding that someone poses a danger becomes prevailing wisdom that is all but impossible to refute.

A board member frequently detains someone based on oral submissions from a government representative that cannot be scrutinized properly, Vecina said.

In addition, she said, the government has no obligation to disclose information favourable to a detainee, who might not even know what the case against him or her is.

"Would rather be dead"

Fothergill frequently wondered aloud whether the regime itself or its implementation might be flawed.

"The current law itself is unconstitutional," Vecina responded. "It is not a fair process."

The lawyers said indefinite detention amounts to cruel and unusual punishment that can cause tremendous psychological damage. Brown, who was sent back to Jamaica at age 40 after more than three decades in Canada, called his experience "horrible."

"I would have rather been dead than detained not knowing when I would be released," Brown said in a statement.

The group End Immigration Detention Network, which has standing in the unprecedented case, wants a 90-day limit on detentions.

Network lawyer Swathi Sekhar told court the system is unconstitutional because it is all but impossible for detainees to win release, and they have no idea when their detention might end.

The network, which presented court with affidavits from four current or former detainees, said hundreds of foreigners are in custody, many housed with hardened criminals, some in solitary confinement.

At least 15 detainees have died in custody since 2000, the group said, but Canada Border Services Agency provides almost no details and virtually no independent oversight exists, the group said.

On hand for a rally outside court Monday was Kimora Adetunji, 33, whose husband has been in immigration detention for the past eight months. Holding their two-year-old son, Adetunji said the situation has been devastating for the family.

The government was to defend the law on Tuesday.