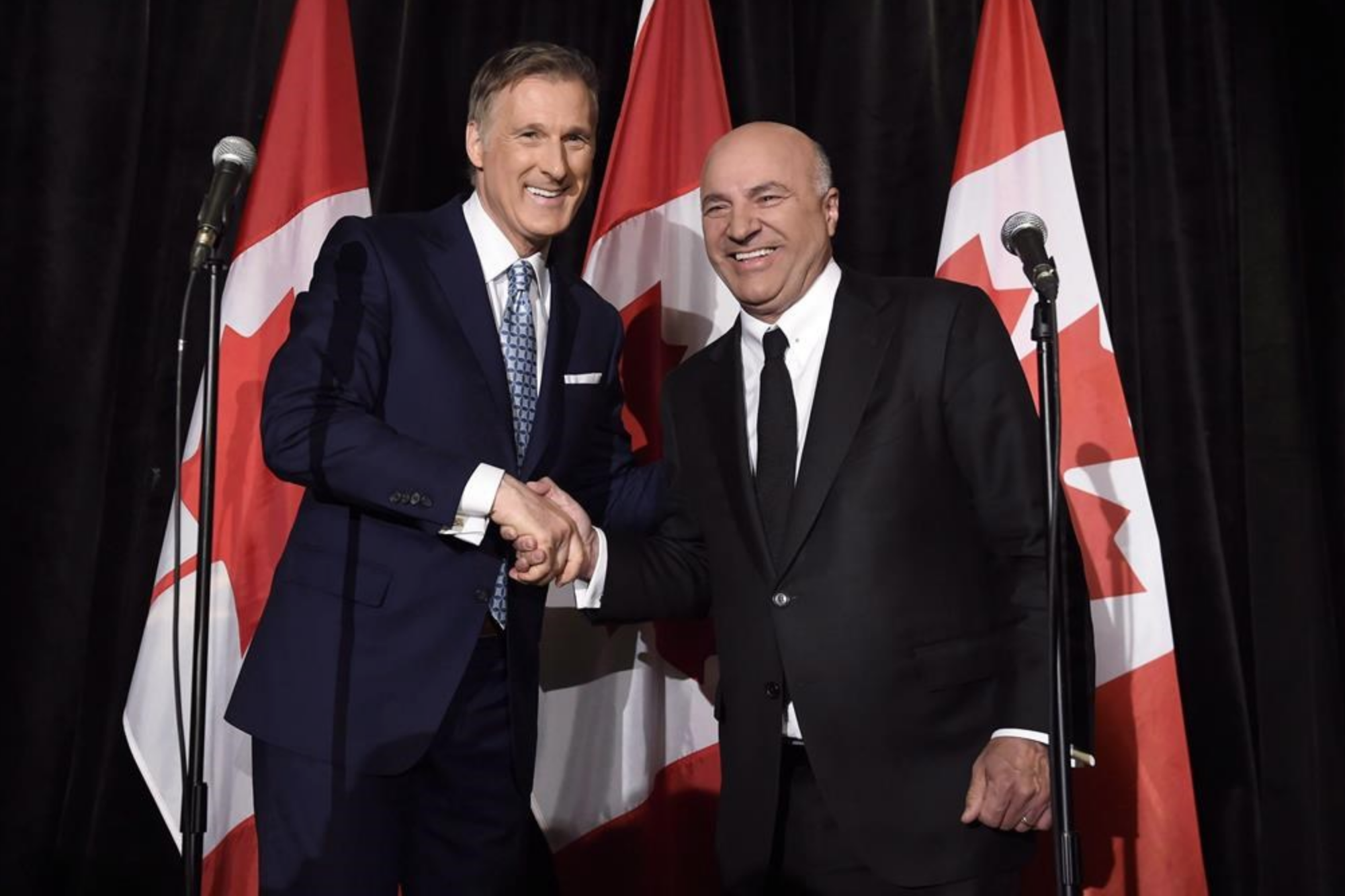 Conservative leadership candidate Maxime Bernier shakes hand with former rival Kevin O'Leary, after O'Leary dropped out of the race on April 26, 2017. Photo by The Canadian Press
Previous story
Next story

Celebrity businessman Kevin O’Leary dropped out of the Conservative leadership race and pledged to back Quebec MP Maxime Bernier’s campaign all the way to decision day, but the duo are also working on a plan for afterwards.

Bernier says that if he wins, he’ll continue having O’Leary as part of his inner political circle for the next two years and then perhaps persuade him to run for a seat in the House of Commons in 2019, though they’ve made no deal on that, yet.

"He can be my economic adviser for free for two years, so I’d be crazy not to use that," Bernier said in an interview with The Canadian Press this week, O’Leary sitting by his side. "But it will be his decision if he wants to run."

There are fewer than 10 days before the new leader of the party is declared and voting is underway, with close to 260,000 members eligible to cast a ballot.

O’Leary signed up around 35,000 of them in the three months he was an official candidate and his team is aiming to deliver many of them to Bernier.

Part of the campaign merger deal between the two was that Bernier would absorb O’Leary’s staff, though some chose not to make the move — emblematic, perhaps, of the fact O’Leary’s voters may not either.

But Bernier remains the perceived front−runner and said O’Leary’s support so far has been essential in maintaining that lead, leverage he wants to use on the road to the 2019 campaign as well.

"With all the name recognition that he is having and he’s a real conservative, that will help me have new people in the party," Bernier said.

O’Leary quit the race saying he could never muster enough support in Quebec to win a general election. He even tried to support supply management and that didn’t work, he said during the interview.

The policy governs the production and price of some agricultural products in Canada, such as eggs and dairy. Given Quebec’s big dairy sector, it is particularly popular there.

But Bernier’s against it, arguing it violates the principle of free markets which he holds dear. So O’Leary decided to come out in support of it during his campaign.

"I felt that could be a differentiation point and I’d negotiate it away anyway," he said, arguing that in the era of a protectionist U.S. president, the policy has to go.

He attributes the fact he has only a handful of caucus endorsements explicitly to his policy, but believes he’ll be able to make people come around.

That includes the party’s grassroots. Currently, the official party policy favours supply management. Bernier said he hopes that at the next policy convention he can get that changed. What happens if he doesn’t? He said it’s too soon to say.

But party unity is top of mind. If he wins, he’ll be calling all the other candidates to encourage them to remain engaged and said he’ll also help them raise money to pay off their campaign debts.

He said he’s taking nothing for granted though and will focus on spending the remaining days getting out the vote.

Party members have until May 26 to get their ballot in by mail, or can vote in person at the convention site in Toronto or at polling stations across the country on May 27.

The winner is expected to be announced around 7 p.m. that day.