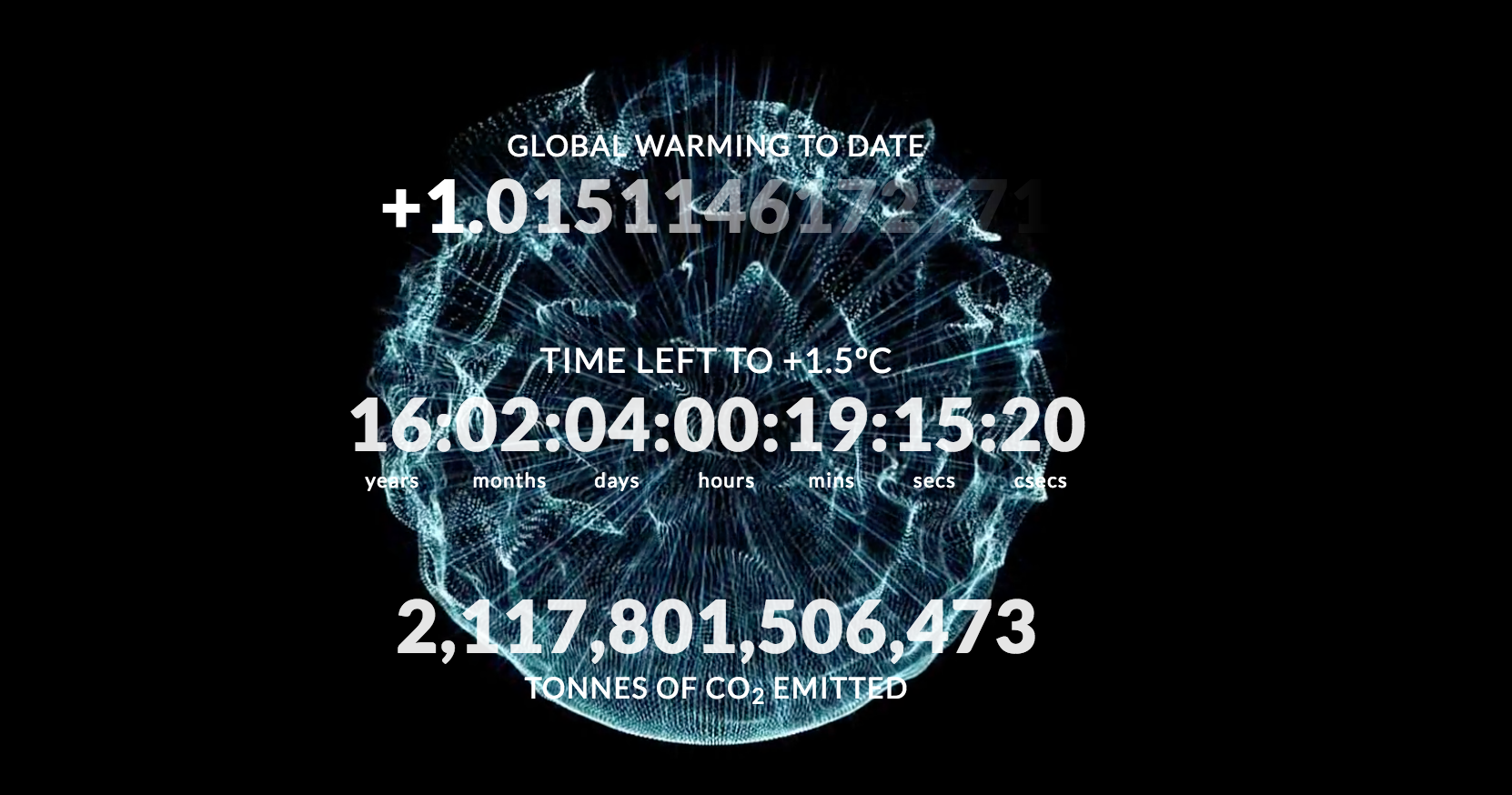 David Usher's Climate Clock is shown ticking away on the homepage of the project's website. Screenshot courtesy of climateclock.net
Previous story
Next story

How can we make people care about climate change?

The question was bothering David Usher — musician, writer, speaker and founder of the Human Impact Lab, a non-profit based in Montreal. Its mission is to engage the world on two of the biggest stories of the century: artificial intelligence and climate change.

“I’ve talked to a lot of climate scientists over the years,” said Usher at an event on technology and social impact in Montreal earlier this month.

“In fact, I was hosting David Suzuki’s birthday party right here and he said something that I hear a lot of climate scientists saying: that they have been telling the same stories to the same people the same way for 20 years. And if you look at what’s just happened in the United States, we know that that’s not working.”

To tell the story of climate change in a “visceral” way, Usher started thinking about the sorts of metrics used to talk about it. He thought speaking about a global temperature increase of 2 degrees was interesting, but not compelling enough for the average person.

“We don't measure our lives in degrees, so no one knows if the average temperature goes up 0.05 degrees this year," he explained.

One year ago, he and a team of programmers and climate scientists, including Damon Matthews of Concordia University, teamed up to create the Climate Clock. It visualizes the time the world has left before reaching the 2-degree threshold — the point the team considers "tragic" for human life on the planet.

Artist and writer David Usher has teamed up with climate scientists to create a Climate Clock that counts down to the global warming apex of two degrees. Video by Clothilde Goujard for National Observer

The project is based on a variety of scientific input, and every year, a group of climate scientists will meet to recalculate the time left based on new information. That data includes changes in heat-trapping carbon emissions, estimates based on policies chosen by world leaders, investments in green energy, or changing trends like the growing adoption of a vegetarian diet around the world.

The Climate Clock, which has been projected on screens and walls during a number of community events already, can be freely embedded on websites and shared on Facebook to create the sense of urgency that Usher believes is necessary to spark engagement on climate change.

“The thing about climate change is that it's far away, it's impersonal, it's very hard to visualize and make visceral," he said. "In many ways, we have to make this a real thing that happens within our lifetime, that is something that is important to us right now, rather than something that we can take forever to deal with."

The Climate Clock project is not yet finished. Usher and his team are working on a second phase that will allow users to manipulate important data points to understand the factors impacting and contributing to a warming planet.

“We can’t pretend we have an endless timeline on this and that it’s something we can push off into future generations," he said. "The longer you put it off, the harder it gets to solve down the line."