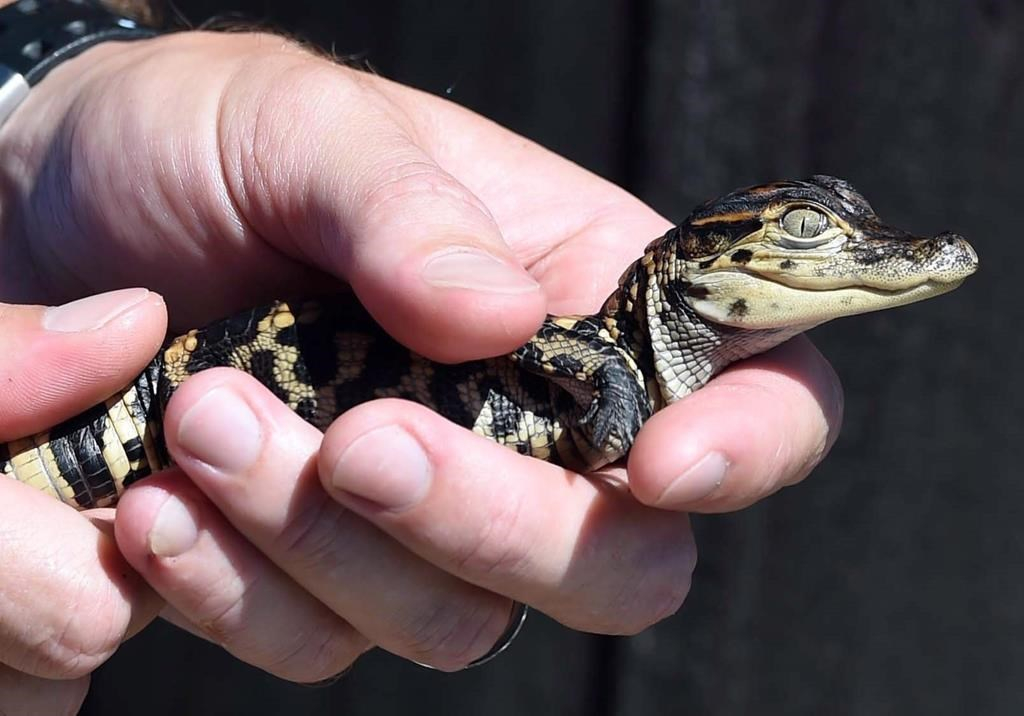 An alligator hatchling is shown in a Sept. 27, 2016 photo. File photo by The Associated Press/Devon Ravine
Previous story
Next story

Monkeys, kangaroos and camels are brought into the ring as the auctioneer bellows into his microphone, sharing interesting tidbits to drum up interest among the few hundred people gathered at a venue northwest of Toronto.

Bids come fast from potential buyers, who include owners of small private zoos as well as individuals looking for an exotic pet.

At one point, two baby alligators, measuring about 30 centimetres long and held in separate plastic containers, become the centre of attention.

"These will grow to 1,000 pounds (453 kilograms) and they will be 13 feet (3.9 metres) long, OK, so they might not fit in your bathtub at home anymore at some point," the auctioneer tells the crowd.

Tim Height, the organizer of the semi-annual Tiger Paw Odd & Unusual Auction, then grabs the microphone.

"Something I didn't do, and I slipped up at the start of this auction, but you need to know whether you can keep this stuff in your area," he says. "You need to know your bylaws. A lot of places have bylaws against some exotic animals, so pay attention and know the bylaws."

Height's warning underscores the slowly shifting landscape of regulations on exotics in Ontario, where buying and selling exotics — wild animals taken from their natural habitat or bred in captivity and not native to Canada — is legal. The province now says it is considering new exotic animal laws.

The government took the first tangible steps toward that goal earlier this week, when bureaucrats met with academics to discuss the state of general animal welfare laws in the province.

"(It) has provided the ministry with important insights that will inform its work with key partners in the coming months to determine the appropriate course of action related to exotic animals," Dorijan Najdovski said in an email.

The province is looking at regulating the sale, trade and ownership of exotic animals, he said.

Some meeting participants said there was much discussion about Ontario moving to a so-called positive list, where only a small number of animals are allowed — usually domestic animals such as cats and dogs. Many jurisdictions have prohibited animals lists, but activists argue those are hard to enforce.

Exotic animals have become increasingly popular in recent years and, according to the World Wildlife Fund, wildlife is now the fourth largest illegal trade after drugs, counterfeit money and human trafficking, and valued at roughly US$19 billion per year globally.

Height — who also runs Tiger Paw Exotics, a mobile zoo that offers animals for fairs, demonstrations and film shoots said he was worried about any potential provincial legislation.

"They're not going to regulate … Our government doesn't regulate, they ban," he said in an interview. "How much trouble do exotic animals cause, really? We're easy targets because exotic animal owners are such a small percentage of the population."

Height acknowledged a few high-profile examples of exotic animal ownership gone wrong: a woman killed by a captive tiger in British Columbia, two young brothers strangled by a snake in an apartment in New Brunswick and an Ontario man killed by his own pet tiger. But, he said, "accidents happen sometimes."

"Now the government is just going to make us criminals," he said.

At the auction, where zebras run around an enclosure and snakes coil up in containers, Height shares personal stories about his own family’s love for exotics.

When a seven-year-old capuchin monkey named George comes on the auction block, Height talks about his daughters.

"My girls really like him," he tells the crowd. "They stop at Subway and they buy two soups, one's for him and one's for them. So they each get a soup, they do all their chores and when they're done, they say 'George go home' and George goes back to his enclosure."

Two Japanese snow macaques, one male and one female, sell for $1,100 each to the same buyer.

"Any time you get a camel you can lead, you can charge $1,000 a day," the auctioneer says. "Christmas season, she'll pay for herself."

Among those in the stands is Yasmin Nakhuda, the former owner of Darwin, the Ikea monkey, whose story went viral in December 2012 when it was found wandering outside an Ikea store wearing a shearling coat. The real estate lawyer, formerly of Toronto, lost ownership of the Japanese snow macaque following a 2013 legal battle, but has since moved to Kawartha Lakes, Ont., where she now has her own menagerie — 53 animals in total, mostly exotics.

But she can't add to her collection — City of Kawartha Lakes council passed an exotic animals bylaw in February, which means Nakhuda can't purchase more exotic animals or breed them.

"I saw this day coming so I did all I could since I moved in to have my dream animals on my little paradise farm," she says.

Mr. Height, who makes his

Mr. Height, who makes his living through Tiger Paw Exotics, is quoted, concerning the movement to ban the keeping of "exotics" (a euphemism for wild animals) - "How much trouble do exotic animals cause, really?"

His question is, of course. human centric. Asking it from the enslaved animals' point of view would sound like "Those **!^^ ## two legged demons are killing us off bit by bit, what do we do?"

Unfortunately the wild animals have no voice, no recourse against the high powered rifles, the explosive ammunition, the traps, the drift nets, the deliberately set forest fires, the money deployed for the sole purpose of killing and enslaving the world's wild animals. Ranchers, land developers, palm oil producers, campaign relentlessly, murder indescriminately, in order to gain access to the resources they covet for the production of wealth. They care nothing for the earth we all require for our existence and it makes no difference to them if their particular greedy action proves to be the tipping point that joins the cascade of disasters that destroy our ecosystem.

Man is swollen with hubris at being the top predator. Somewhere in the animal world there is a rationale for the presence of top predators - they help to keep population balances stable, they actually act as superefficient waste disposal experts and masters of recycling. In contrast the human top predator is swamping the world with his toxic waste. If it comes to a showdown - I'm rooting for the animals. Humans are bingeing their way to extinction.