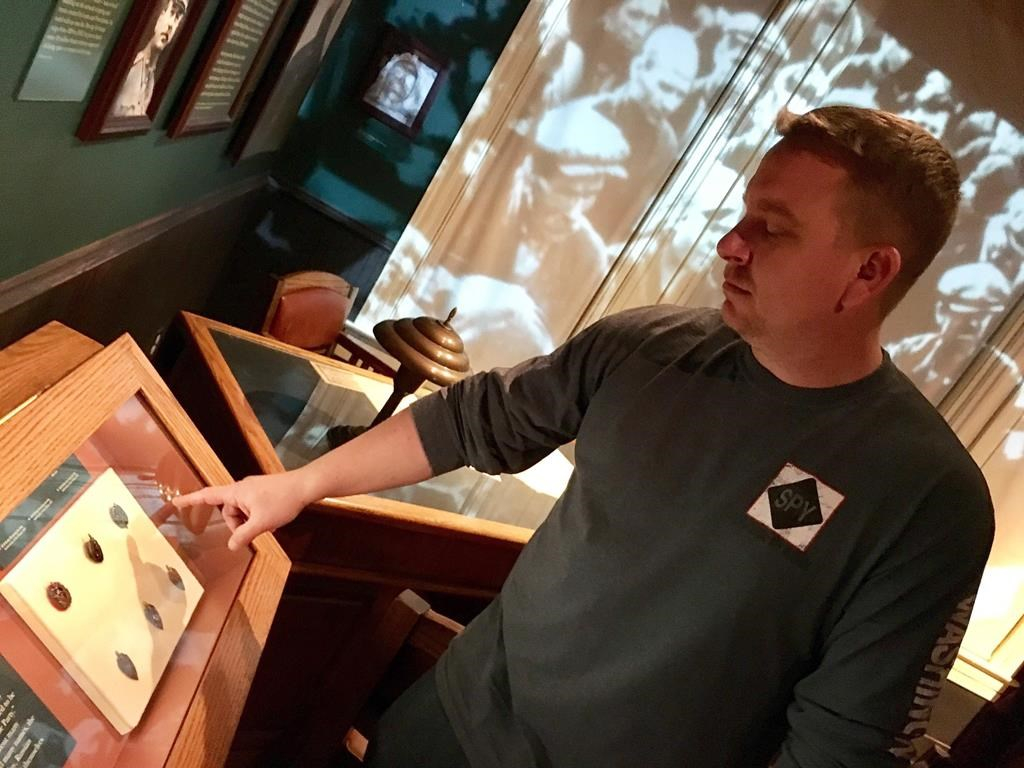 Espionage historian Vince Houghton, the curator of the International Spy Museum, seen here on March 31, 2017, in Washington, D.C., pointing out an exhibit on the history of Russian espionage. File photo by The Canadian Press
Previous story

Most of Washington is animated by chatter about the future of the Trump presidency, and whether it might be washed away by the constant drip, drip, drip of leaks related to the Russia election-meddling investigation.

What stirs his passion is the past. Unlike many in this town, he's not just thinking about elections in 2018 and 2020. For him, these events bring to mind historical dates: 1917, and the creation of Russia's most fearsome espionage unit; 1948, when the CIA refined the art of election-meddling; and 1983, when the Russians spread a masterpiece of fake news about the origin of AIDS.

He's the curator of the International Spy Museum.

He also has a PhD in intelligence history, a master's in U.S.-Soviet relations, speaks Russian, did some work with U.S. intelligence agencies he can't really talk about, and is married to a former Democratic official, giving him a unique perspective on the events of 2016.

And he really, really wants the Democratic party's server.

Houghton has a dream of getting the party to hand over two historic artifacts it possesses: the file cabinet from the 1972 Watergate break-in, and the computer server hacked in last year's first batch of Wikileaks releases.

"Can you imagine a museum display of those two next to each other? Of the two break-ins of the DNC — one real, (with) paper (and) burglars; the other one cyber?" he said in an interview in his museum.

"I'd love to get it eventually... It belongs in a museum."

His interest in this goes way back. Houghton was traumatized as a kid by the nuclear-apocalypse movie, "The Day After," and became obsessed with understanding the Soviets. People teased him for studying Russian in college in the 1990s: "Everybody was like, 'Why are you learning Russian? They're our friends. Why aren't you learning Arabic or Chinese?' I said, 'Just be patient. It's coming back.'"

He foresaw a Cold War 2.0, he says, based on insights in the famous 1946 "Long Telegram" from diplomat George Kennan: that U.S.-Russia tensions were not just about capitalism-versus-communism, but stemmed from a deep sense of insecurity Russians felt toward the West, an insecurity exploited by successive poor leaders eager to shift blame for their own failures.

In the 1990s, he said, he saw three groups of Russians profiting from the sudden switch to capitalism — mobsters, ex-Communist party apparatchiks, and the intelligence services: "In (Vladimir) Putin, you have all three."

—1917: The creation of the Cheka. The early Bolshevik intelligence service was precursor to the KGB. Russian intelligence services have been studying the U.S. for a century, and understand its vulnerabilities, Houghton said: "These guys know what they're doing."

The Cheka were so brutal and violent that it was an insult, a slur, later in Soviet history to call someone a Chekist, he said.

But their memory has undergone a rehabilitation under Putin. A spy museum exhibit shows how old Chekist iconography has been resurrected in modern Russia, with anniversary pins for the contemporary spy services resembling old Bolshevik ones, including their use of Roman numerals.

—1948: The CIA begins interfering in foreign elections. It starts with so-called "Italian Job." Communists there had a chance, for the first time, to win a free and fair national election, undermining the western notion that communism relies on coercion.

The CIA did everything to stop it. A then-agent, Mark Wyatt, described how cash-filled suitcases were exchanged at a Roman hotel. He told a 1998 CNN documentary: "We had bags of money that we delivered to selected politicians, to defray their political expenses, their campaign expenses, for posters, for pamphlets."

Houghton said celebrities were enlisted in the operation — ranging from the Pope to Frank Sinatra. American Mafia figures called back to their hometowns with threats, priests threatened hell, ballot boxes were stuffed, Houghton said.

"They did everything they could," Houghton said. "It was really the coming-out party of the CIA."

The organization was in its infancy; that successful operation led to others around the world over a quarter-century. Espionage abuses ultimately led to congressional hearings in the 1970s, followed by reforms and new oversight bodies.

—1983: The Soviets pulled off a historic feat of so-called "black" propaganda. There are three types — white, grey, and black, Houghton explains. When you know where your information comes from, it's white propaganda — like Russia Today or Voice of America. Grey is unclear.

Then there's a whole other layer of subterfuge: "The holy grail is black progaganda," Houghton says. "Not only are your hands clean — you can point to somebody else (for doing it), kill two birds with one stone."

Soviets were masters at spreading "dezinformatsiya," disinformation, or, in the modern parlance, "fake news."

Soviet agents were required to spend 25 per cent of their time conceiving of, and implementing, it, and there was a whopping $3 billion-a-year budget for it in 1980, according to a paper for the U.S. Intelligence Community's Journal for the Intelligence Professional in 2009.

Thomas Boghardt chronicles in that paper how Russians started a global rumour: that the U.S. government created AIDS.

Someone planted a letter in a socialist Indian newspaper, purportedly from a "well-known American scientist and anthropologist," that the virus was concocted at Fort Detrick, Md. Like all great propaganda, the letter included kernels of truth about other American abuses.

The story spread to western newspapers, and into American cities.

The KGB planted 5,510 stories in this way in 1975 alone, and controlled 10 Indian newspapers and one news agency, according to KGB archivist and defector Vasili Mitrokhin, who was cited in the 2009 paper.

Is Hillary Clinton dying from a terminal illness? Have numerous Clinton opponents been killed? Was Wikileaks' source killed? Is the election being rigged? Social media were filled with this kind of bilge during the campaign. Some of it was recycled by the campaign itself.

He said the Russians are using new techniques against political targets — including cyber-attacks. He said they road-tested the latter in Estonia in 2011, now it's happened in the U.S. and France.

Houghton admits he initially misread what was happening last year.

When Democrats asked him about the server hack, his initial response was: "Yeah, that's their job." He said hacking happens all the time. His told them the Russians were trying to free ride, stealing Democrats' research on Trump without working to collect it.

The shocker was when they weaponized it. What was novel, and morally wrong, he said, was when they pumped it out through intermediaries like Wikileaks, never bothered to redact the names of children, and published Social Security Numbers.

That's why he wants the server in his museum.

"There's no parallel for that."