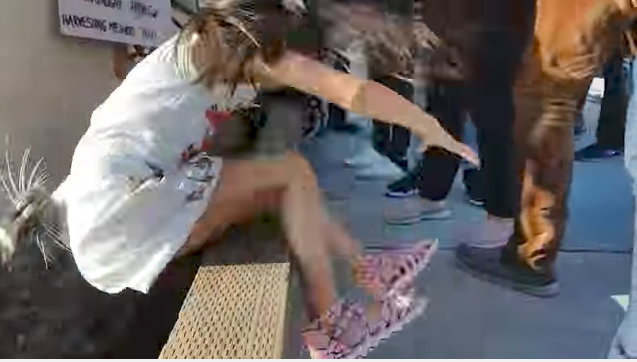 A sea lion pulls a girl gets into the water in Richmond, B.C. on May 20, 2017. YouTube screenshot
Previous story

The man who shot heart stopping video of a sea lion snatching a little girl off a Vancouver-area wharf says at first he froze.

"I was just in shock. I didn't know what to do at first," Michael Fujiwara said a day after he shot the video on Saturday that shows the sea lion lunge up, grab the little girl's white dress and pull her down into the water at the Steveston Wharf in Richmond, B.C.

The terrifying video that Fujiwara posted online shows a man immediately leaping into the water, scooping up the child and hauling her to safety.

Fujiwara, 23, said he believes the man is the girl's grandfather, and he grabbed both of their hands to help pull them back up to the dock.

"I was just panicking, actually. I've never seen anything like that before. I just didn't know how to react," said Fujiwara who was having coffee at the wharf when he decided to pull his phone out to take some video of the sea lion swimming by the wharf moments before it snatched the girl.

"Everyone just thought it was super friendly and all, but seconds later the girl decided to sit on the side of the dock and that's when the sea lion decided to jump out and drag her into the water," Fujiwara said.

The family was visibly shaken by the incident, Fujiwara added, and immediately left the area.

Fujiwara posted the video online Saturday and by Sunday afternoon, the video had been viewed more than 2.6 million times on YouTube, and shared more than 700 times on Twitter.

"It's an unfortunate incident, first and foremost. I hope the little girl's okay," he said. "But we've been trying to get that message out for years and years — don't feed the animals. You're just asking for trouble when you do that."

California sea lions often visit the area on their migratory cycle, hoping for handouts from fisherman, but signs are posted warning people not to feed any of the animals, Baziuk said.

"It's kind of staggering and it's a really unfortunate incident. But it happened and now that video is the poster child for why you don't (feed the sea lions)," he said.

Danielle Hyson, a senior marine mammal trainer at the Vancouver Aquarium, said there has been an uptick in people feeding wildlife around the Vancouver area, from bears to birds. That behaviour leads to an increased number of dangerous close encounters.

"You saw him kind of initially lunge out of the water and give a little huff. That's what we would call an aggressive precursor," she explained. "So he's letting the people know that he's starting to get frustrated. And in that situation, the people should have backed off right away."

Frustration can lead to aggression, Hyson added, noting that male California sea lions are powerful animals that can weigh more than 200 kilograms.

Despite their power, the marine mammals have big eyes and whiskers that can tug on human heart strings.

"They look cute and I know people have a natural fascination with them. They look like they're water dogs but they absolutely are not," Hyson said.

The trainer said she's also concerned about the little girl's health after watching the video. If the child suffered any sort of puncture or broken skin, she could be at risk of an infection that doctors could find difficult to treat.

"Seals and sea lions can carry some pretty nasty bacteria in their mouth," Hyson said.

The Vancouver Aquarium is encouraging the family to get in touch for more information on how to handle a possible infection.