By Canada's National Observer | News, Politics | May 24th 2017
#18 of 116 articles from the Special Report: State of Journalism 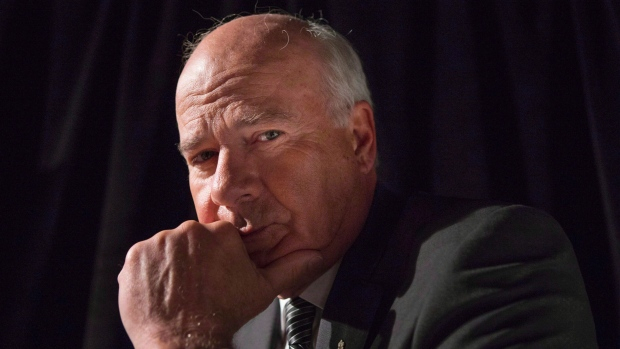 Peter Mansbridge, host of CBC's The National, announced last year that he would resign in 2017 after 28 years at the helm of the desk. A new poll shows how card-carrying Conservatives view the CBC. File photo by The Canadian Press
Previous story
Next story

Registered members of the Conservative Party of Canada are more hostile towards the Canadian Broadcasting Corporation than their fellow citizens, a pair of brand new polls has found.

The separate surveys, released Wednesday by Mainstreet Research and Nanos Research, are the first polls conducted during the opposition party's current leadership race that are focused on the public broadcaster. They compare the views of card-carrying Tories about the CBC to the views of others across the country.

People registered to vote for the new leader of the Conservatives, the polls show, are more aggressive towards the CBC, even when compared to other conservative-minded voters who don't carry the party membership card.

Overall, the Nanos poll found that only 14 per cent of respondents across the country were in favour of reducing the CBC’s $1 billion annual budget, which is funded by Canadian taxpayers.

The polls were conducted as Canada’s largest media outlets continue to slash budgets and reduce news coverage across the country.

Both surveys asked respondents whether they agreed with the statement: “Now that virtually all private news in Canada are owned by only a few large corporations it is more important than ever to have a strong and vibrant CBC.”

The polls were commissioned by Friends of Canadian Broadcasting, an independent watchdog group for Canadian programming.

The group’s spokesman, Ian Morrison, explained in an interview that the results show that the Conservative Party has room to appeal to more voters, based on what it says about the CBC.

“Those 40 per cent of Canadians who would consider voting Conservative are far different than the members of the Conservative party,” Morrison said.

The Nanos poll surveyed 1,000 people across Canada between May 12 to May 16 and is considered accurate within 3.1 percentage points, 19 times out of 20. The Mainstreet poll was conducted from May 7 to May 11 using a sample of 5,895 names taken from a Conservative Party of Canada list of 259,010 members.

The Conservative Party is expected to announce the results of its leadership race on May 27 after counting the ballots.

The polls also found that 51 per cent of Conservative members felt that the CBC's independence had decreased over the past year, compared to 36 per cent of the general population who felt that way.

A majority of Canadians in all categories believed that the prime minister had "too much influence" over the nature of the CBC's content and programming since he is allowed to appoint the board of directors.

The current CBC board is dominated by appointments made by former Conservative prime minister Stephen Harper. However, 71 per cent of Tory members said that the prime minister's power to appoint board members gave the government too much influence, versus 54 per cent of Canadians who felt that way.

More than 60 per cent of the supporters of the top four candidates in the Conservative leadership race to be decided later this week—Maxime Bernier, Andrew Scheer, Erin O’Toole and Kellie Leitch—said they disagreed that it was important to have a strong and vibrant CBC.

The numbers were the opposite for Michael Chong. More than 60 per cent of Chong supporters said they agreed that it was important to have a strong and vibrant CBC.

The margins of error of survey results would be higher for individual samples of supporters for the various candidates.

Chong has the fifth-highest level of support among Conservative members, according to Quito Maggi, president and chief executive officer of Mainstreet Research.

Another Tory leadership candidate, Saskatchewan MP Brad Trost, recently attempted to introduce legislation in the House of Commons to privatize the CBC, but his bill was defeated in a 260-6 vote.

Mansbridge is leaving. Does the CBC have the courage to build a truly great program?

Why was Evan Solomon fired and not Amanda Lang?