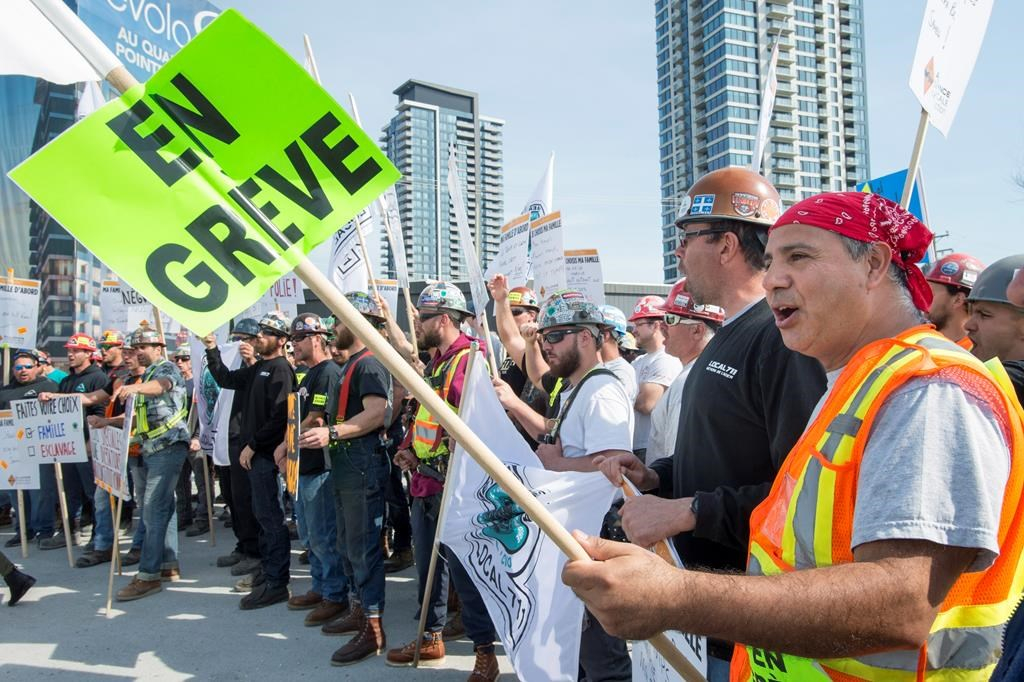 Construction workers form a picket line in front of a construction site on Wednesday, May 24, 2017 in Montreal. Photo by The Canadian Press/Paul Chiasson
Previous story
Next story

The walkout began Wednesday morning after construction companies and labour federations failed to sign collective agreements ahead of a strike deadline of midnight Tuesday.

Work schedules and overtime are said to be at the heart of the conflict in the industrial sector, while salaries are the main stumbling block in the residential sector.

Michel Trepanier, a spokesman for the union alliance, says walking off the job was the only possible option.

"Employers are asking us to sacrifice time with our families to be available for work," Trepanier said. "There are limits and they've been reached.

"A strike was our only option. We negotiated right up to the last second to try to get an agreement. In fact, we accepted several times to work with a conciliator in order to reach a deal without a labour conflict."

Trepanier said the employers' objective is clear: they want to drag out negotiations to benefit from the fact construction workers are not entitled to retroactive pay. Their collective agreements expired April 30.

Labour Minister Dominique Vien said Tuesday the provincial government was looking at bringing in back-to-work legislation in the event of a strike, saying a walkout could mean losses of $45 million a day for the Quebec economy.

Employer groups have said the province's anti-strikebreaker law does not apply to the construction workers, meaning some sites would be able to stay open if workers showed they wanted to stay on the job during the labour conflict.

This is the second general strike in the Quebec construction industry in four years. All construction sectors are out of work and pickets have been installed at the entrance to several sites.

The federation that represents chambers of commerce in Quebec is calling for a rapid settlement to the conflict.

"The adage that says 'when the construction industry is doing well, everything is doing well' is also inversely true — a labour conflict has a major and direct impact on all economic sectors," said Stephane Forget, head of the Federation des chambres de commerce du Quebec.

Forget noted the 10-day work stoppage in 2013 resulted in a drop of 1.1 per cent in the province's gross domestic product.