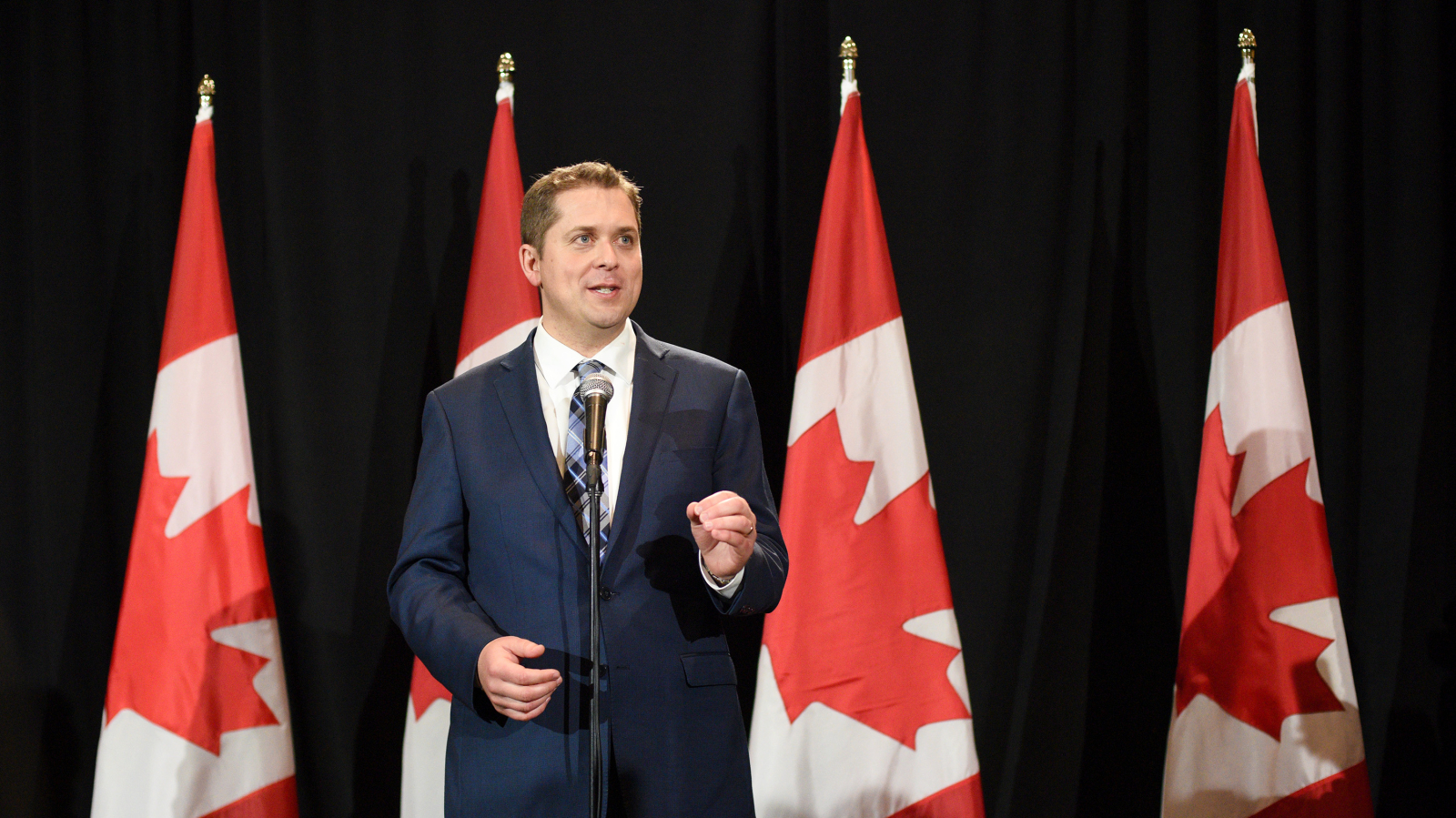 After trailing through 12 rounds, Conservative MP Andrew Scheer pulled off a stunning come-from-behind victory on May 27, 2017 in Toronto, defeating fellow MP Maxime Bernier in the 13th and final round. Photo by Riley Sparks
Previous story
Next story

After trailing through 12 rounds, Conservative MP Andrew Scheer pulled off a stunning upset victory on Saturday evening, defeating fellow MP Maxime Bernier in the 13th round of voting in his party's leadership race.

Scheer who won the leadership with 51 per cent of the vote, will now face off against Prime Minister Justin Trudeau as the new leader of the Official Opposition in the House of Commons.

Scheer, 38, is a socially conservative MP who served as speaker in the House of Commons during the final years of the Harper government. He was considered a less likely winning candidate ahead of Saturday’s announcement. But he positioned himself as a candidate more likely to connect with Canadians who didn’t share Bernier’s more libertarian policies.

"What a race this has been," a smiling Scheer told party supporters following his victory. "This makes a 78-day campaign look like a walk in the park."

Scheer was referring to the last federal election campaign in 2015, which lasted 78 days after former prime minister Stephen Harper called an early election, before being defeated by Trudeau's Liberals.

Ahead of the final results, Bernier was widely expected to win, with many calling the race his to lose after TV star Kevin O’Leary’s abrupt departure from the race earlier in May.

“I cannot allow Justin Trudeau to do to my five children the same thing that his father (former prime minister Pierre Trudeau) did to my generation,” Scheer said as he continued his victory speech. The newly-minted Tory leader also emphasized his promises to cut spending and to eliminate what he called the “cash grab” carbon tax introduced by the Trudeau government. Trudeau's plan to put a price on carbon pollution are at the heart of the Liberal government's efforts to fight climate change.

Scheer's victory speech offered no concrete proposal to address climate change, a global problem that scientists say is accelerating due to land-use changes and pollution from fossil fuels. Climate change is expected to trigger major security, economic and ecological damage across the planet.

Newly-minted Conservative leader Andrew Scheer told reporters on May 27 in Toronto that it was important for him to defend the right of people to speak about their beliefs. Video by Riley Sparks

Trudeau swept to power in 2015 by promising "sunny ways" after voters rejected what some critics described as mean-spirited policies and decisions by the former Harper government. But Scheer suggested that the Trudeau government was wasting public money and failing in efforts to fight terrorism.

“Conservatives have and always will be the party of prosperity, not envy; the party that always represents taxpayers, not connected Ottawa insiders," Scheer said. "And we are the party that believes there is more to society than just government."

He also took a shot at what he called Trudeau’s obsession with “photo-ops and selfies,” and worked in a reference to the prime minister’s New Year’s family vacation, which included a trip to a private Caribbean island owned by the Aga Khan and is now under investigation by the federal ethics commissioner.

Scheer’s speech included glowing references to Harper’s legacy: “He set an example of what it is like to fight for conservative values, both in Canada and around the world.”

His pledge to cut federal funding for universities that “shut down debate” drew sustained applause, as did his pledge to send Canadian fighter jets back into the fight against the Islamic State.

In Saturday's nailbiter, there was a slight gap between Bernier and second-place candidate Scheer before the final round of voting.

Bernier, a former cabinet minister who pledged to make deep cuts to the federal budget, took an early lead but wasn’t been able to pick up more than half of the vote. After 12 rounds, Bernier’s lead increased to 40.38 per cent of the vote, followed closely by Andrew Scheer with 38.36 per cent. Scheer had been about six points behind for much of the race, but suddenly pulled closer in the second-last ballot.

Erin O’Toole was in third place, with 21.26 per cent of the vote and was eliminated from the race after the 12th round.

Kellie Leitch, whose insistence on “Canadian values” screening for immigrants led Bernier to dismiss her as a “karaoke version of Donald Trump,” took seven per cent of the vote in the first round. But her message didn’t seem to connect: after nine rounds of voting, her share of votes increased to a final 7.95 per cent before she was dropped from the list.

Michael Chong, a long-shot candidate who supported a national carbon tax and had sparred with the Conservative establishment over the elimination of the long-form census and the Harper government’s cuts to scientific research, hung on for 10 rounds of voting, picking up enough second-choice votes to bring him to 9.14 per cent before he was eliminated.

Bernier is a Conservative veteran who took on several cabinet portfolios under former prime minister Stephen Harper. He was forced to give up his foreign affairs portfolio in 2008 after he left classified documents at the home of his former girlfriend, who was alleged to have connections to the Hells Angels.

During the campaign, Bernier laid out a libertarian vision that called for reducing the government’s role in health care. He also made eliminating agricultural supply management a key platform point – a move that may have cost him support among some farmers in Western Canada and Bernier’s home turf of the Beauce region of Quebec.

Ahead of the announcement on Saturday, Bernier was widely expected to win, with many calling the race his to lose after TV star Kevin O’Leary’s abrupt departure from the race earlier in May. O’Leary took 1.07 per cent of the vote in the first round, putting him ahead of three candidates who had not dropped out.

About half of the more than 250,000 Conservative party members eligible to vote had already cast their votes by mail well before Saturday. But the leadership convention’s ranked ballot system made polls difficult to read ahead of the vote, and left the possibility of a last-minute upset.

Speaking in front of a room packed to the 2,000 party members gathered in Toronto for the convention on Saturday, interim party leader Rona Ambrose blasted the Liberal government as “arrogant, entitled and out of touch,” and repeated a call for party members to unite after the at-times acrimonious campaign.

“The values that we share are so much more important than the proposals made in the heat of any campaign,” Ambrose said.

Ambrose also referred to a recent National Post article which quoted Ontario Conservative MP Larry Miller, who said of the interim leader that "She could be compassionate but when she needed to kick Trudeau in the balls, she did it."

In speeches on Friday night, leadership contestants – Bernier among them – had a similar message for party members, asking them to unite behind whichever of the 13 candidates was victorious.

Just hours before the vote, Bernier's campaign sent supporters an email pitch offering them a “last chance” to donate to his campaign and add their names to a list of loyal supporters – a list he promised to maintain as party leader.

Very odd email from @MaximeBernier - "last chance" to get your name on list Bernier pledges to carry with him of his initial supporters? pic.twitter.com/N1nOA0tPkJ

“When the dust settles, my team is going to give me a list of everyone who was with me from day one – the people who supported and donated to my campaign,” the letter read. “As Conservative Party leader, I’m going to keep that list with me. I want to remember each and every person who stood by me in the leadership race. This is your last chance to get your name on that list.”

Candidates are scored not by votes, but by points: every riding in the country is allocated 100 points, and each candidate gets a number of points depending on their share of votes in that riding.

Scheer will be tasked with bringing the party together after a race that saw traditional Conservatives, including many veterans of the Harper administration, pitted against candidates with more divisive views like O’Leary and Leitch.

The new leader noted in his victory speech that the party must remain united to win the next election and said that he would welcome all types of conservatives in the party.