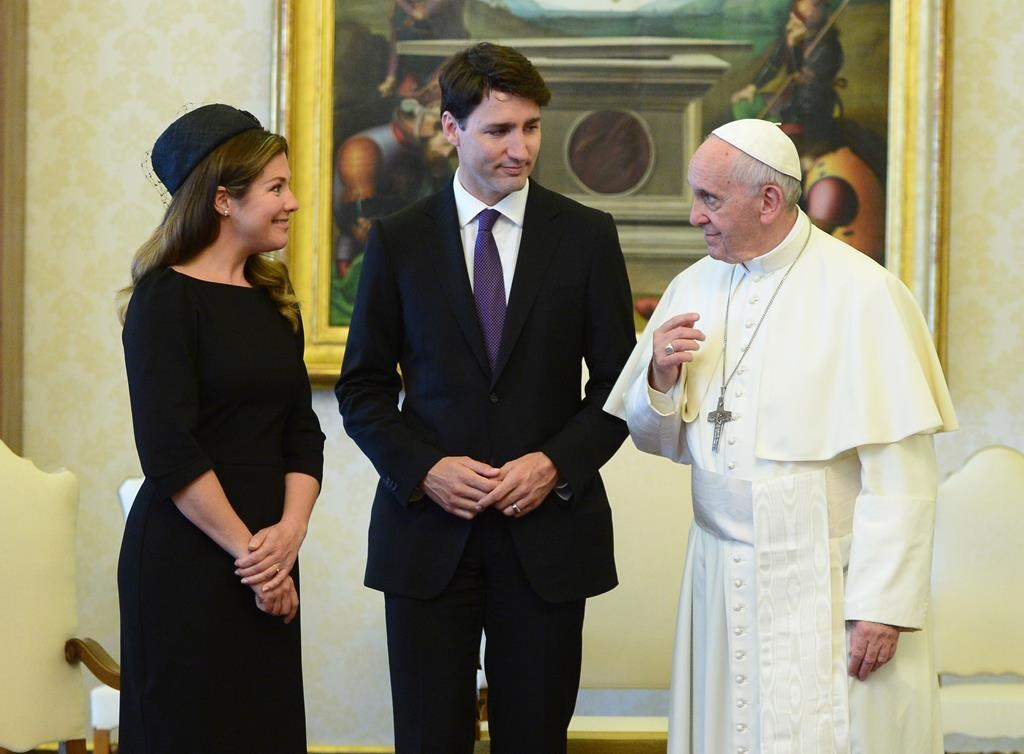 Prime Minister Justin Trudeau and wife Sophie Gregoire Trudeau meet with Pope Francis for a private audience at the Vatican on Monday, May 29, 2017. Photo by The Canadian Press/Sean Kilpatrick
Previous story
Next story

Canadians want to press ahead with reconciliation in the wake of the residential school era, Justin Trudeau said Monday as he described his efforts to encourage Pope Francis to apologize for the Catholic Church's role in the tragedy.

The pontiff — who pointed out that he himself is no stranger to the cause of helping those who have been marginalized — seemed open to the idea, the prime minister said following his audience with Pope at the Vatican.

"He reminded me that his entire life has been dedicated to supporting marginalized people in the world," Trudeau said.

Pope Francis also expressed his enthusiasm for working with the prime minister and the Canadian bishops on finding a way forward on the issue of an apology, as recommended by the Truth and Reconciliation Commission.

The commission included the demand for a papal apology — to survivors, their families and communities — as one of the 94 recommendations in its report on the dark history and legacy of residential schools.

Trudeau, who has promised to act on each recommendation, had previously promised to speak to the Pope about an apology, but pointed out he could not compel the pontiff to agree.

On Monday, Trudeau said he invited the Pope to visit Canada in the coming years, and thanked him for the global leadership he has shown on climate change. The pair discussed the importance of protecting the planet, he added.

Trudeau, a religious Catholic, described the meeting as an opportunity for him to have a deeply personal discussion with the leader of his faith.

At 1:04 p.m., a bell rang, signalling the end of the private audience, which began in the Pope's private quarters at about 12:28 p.m. The Prime Minister's Office described the audience as having been 42 minutes long.

Afterward, Trudeau introduced his wife, Sophie Gregoire Trudeau, to the Pope along with officials from the PMO.

The prime minister gave the Pope a rare set of Jesuit Relations books, which have become an important source detailing the beginnings of Canada.

Trudeau called the books "an essential tool for historians to understand the early years and stories of Jesuit missionaries documenting the origins of Canada."

"This is a rare edition that we got from the Jesuits," he said.

The prime minister also presented the Pope with a Montagnais-French dictionary written by a French Jesuit in the 17th century.

In return, the Pope gave the prime minister a gold medal marking the fourth year of his pontificate, an autographed copy of his message for World Peace Day and three papal letters about family, environment and evangelism.

A readout from the Prime Minister's Office described "an extended conversation" on the need for leadership on issues like climate change and mass migration, and a discussion about stronger relations between Canada and the Holy See.

Why the Pope has caught this non Catholic's attention